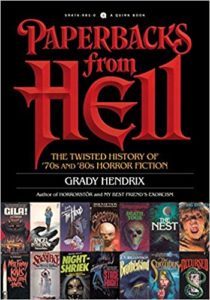 For horror readers, the era of the ’70s and ’80s accomplished the substantial paradox of being both a golden age and a nadir, simultaneously. It was a golden age because horror became a recognized commercial genre and any enthusiast could find oodles and oodles of the stuff, in paperback, below the level of the few recognized bestsellers. It was a nadir because so much of it was formulaic in the extreme, a land of evil children and haunted houses and rampages by suddenly carnivorous lower forms of life in which any truly remarkable work was all too prone to go unnoticed.

Admittedly, for folks addicted to the gory but disposable for its own camp pleasures, this could be not a bug, but a feature—and this is the niche occupied by Grady Hendrix, who knows the difference between bad and good but who celebrates both extremes equally, the bad with enthused mockery, and the good with genuine appreciation.

Hendrix’s book is Paperbacks From Hell: The Twisted History of ’70s and ’80s Horror Fiction, and it’s at first glance all too easy to mistake for what Stephen King, referring to the Medved Brothers, called “those mostly witless compendiums that celebrate the worst of everything.” It is illustrated with hundreds of paperback covers, some of which your friendly columnist is downright sheepish to admit he remembers; books that were designed to look garish and low-rent and disreputable and brutal, some of which are thoroughly appalling to encounter for the first time. Take the very first one mentioned in the text, John Christopher’s The Little People, published by Avon in 1966, which is, strictly speaking, a few years before the era the book purports to cover. It’s a march of green-clad leprechauns wearing Nazi armbands and wielding whips. I deeply regret the feelings of revulsion I prompt in many readers by reporting that “these are psychic Nazi leprechauns who enjoy S&M, are covered with scars from pleasure/pain sessions with their creator, were trained as sex slaves for full-sized human men, and are actually stunted fetuses taken from Jewish concentration camp victims. And one is them is named Adolph.”

After a moment’s pause to allow my readers time to either tamp down their giggles or return from a vomiting session at their closest toilet, I note that this reflects much of the balancing act that Hendrix is required to perform throughout his entire book: simultaneous delight in the ridiculous and perverse, and mockery of the undeniably demented, while not neglecting that which is genuinely deserving of praise. He must also show compassionate understanding toward those creators who meet the unfortunate fate of so many of us working in the text mines and lose heart, as in the case of one Ken Greenhall, a well-meaning fellow previously unknown to me who was “appalled by the cover Zebra Books gave [Hell Hound in 1977],” and was, after his subsequent “nothing short of astonishing” novel Lenoir (1998), so broken-hearted by a patronizing review in the New York Times that he never wrote again. It is hard to find such patronizing mockery in Hendrix’s conclusion: “Greenhall is gone, but his characters—Elizabeth, Baxter, Lenoir—go on talking. They sit across from us, chatting calmly, explaining the madness that infects their lives, and eventually it begins to infect our lives, too. We only have to listen.”

With similar eloquence, he writes of the work of Ramsey Campbell, “His Liverpool and London are necropolises of marginal people, hateful shut-ins, catatonic homeless, gutter-crawling journalists, their loneliness and isolation amplified by the urban hellscapes in which they’re entombed.”

This is not the same as saying that all of the text is that generous. By necessity, Hendrix needs to devote several pages to the history of the Amityville Horror phenomenon, which he quite rightly fact-checks and concludes (amid plenty of deserved mockery) as the product of a self-serving child abuser enriching himself by marketing his demons as the supernatural kind. “George and Kathy Lutz,” he writes, “claim that the Entity changed their personalities and made them violently aggressive toward their children. But [their son] Daniel says that happened plenty of times before they moved in and plenty of times after they moved out.”

All this (which my word count feature happily tells me amounted to exactly 666 words; go figure), is provided to establish that Hendrix’s volume does not stint on the serious, in a single-minded stampede to confront that which is best covered humorously. Any reader with a sense of humor about the genre will laugh at significant length multiple times, especially during the long chapter recounting the many times in various books that humanity has been confronted by ants, grasshoppers, slugs, killer whales, rabbits, cows, fish, and (yes, Guy N. Smith fans), an entire series of novels about crabs. Your friendly reviewer is particularly fond of his synopsis of Nick Sharman’s The Cats (1977), in which London is inexplicably brought to its knees by an all-out assault by the suddenly murderous creatures we have taken into our lives and given names like Muffin and Puss-Puss. He concludes, “When the felines are finally burned alive with napalm and the survivors are machine-gunned, it seems like something of an overreaction, especially when we all know that a helicopter dangling a bit of string could have led them out of town just as efficiently.”

Hendrix’s genuine appreciation for the stories that are worthy of our respect and veneration make his mockery, when it appears, easier to take. He says of William W. Johnstone, “Characters act in ways that barely resemble human behavior. The carnage flies quick and cartoony, with popped-out eyeballs flying across a room, people’s heads flattening when hit, cats gamboling in loops of human intestines . . . reading Toy Cemetery (1987), is like driving through a dust storm while in a post-concussion haze; the harder you try to focus, the more everything slips away into an insanity vortex.” He notes, “A supermarket check-out girl’s head explodes, but no one seems to mind.”

And this is what elevates Hendrix’s book beyond a gallery of mostly-campy covers. It’s an actual delight to read, not just to look at, its content divided by separate chapters about Satan-worship novels, creepy-kid novels, weird science, and a final chapter devoted to “splatterpunks, serial killers and super creeps.”

This is a volume that joins this reviewer’s permanent library, where it will no doubt be taken down and paged through with perennial appreciation.