The Monster, Minus Three Days

Thing your friendly neighborhood review columnist has discovered, since last you saw him: that if you name your new male kitten “Philip Marlowe” after the great hardboiled detective created by Raymond Chandler and played on film by Humphrey Bogart, Robert Mitchum, Elliott Gould and many others, and call that cat “Marlowe” for short, lots and lots of people will think that the cat is a girl you named after the actress Marlo Thomas, and honestly, it is enough to make the lover of The Big Sleep want to plunge himself into the La Brea Tar Pits. Honestly.

And in the meantime, here’s an offering that should be showing up around about now. 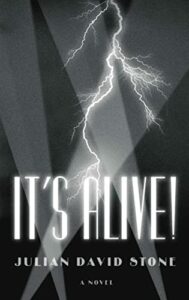 It’s Alive! by Julian David Stone is not a horror novel. It is indeed being published in the historical fiction category, appropriate enough because it does involve actual people and actual events, with lasting importance unsuspected even by those for whom it possessed the weight of pressing urgency.

I review it here because it has profound associations with our own little genre and will likely be of splendid interest to many of you.

It covers the three days leading up to the commencement of principal photography for the James Whale classic, Frankenstein, a movie that many of us know by heart and, even if we don’t, certainly recognize as an important genre landmark.

There are three viewpoint characters.

The most important is Junior Laemmle, the mogul who has inherited control of Universal Studios from his father, Carl Laemmle. Junior is a guy beset by regular seizures whose view of the picture business has always been in opposition to his father’s; Carl just wanted to make cheap, formula pictures that he knew he could depend on an audience going to, and Junior wants to make prestige pictures, ones that will stand out in an increasingly competitive business. His next is Frankenstein, a project he deeply believes in even if many people, like pain-in-the-ass gossip columnist Louella Parsons, express deep skepticism that any audience will ever want to come to material that dark. (This despite the previous year’s hit, Dracula.) Chief of Junior’s problems is the return of his legendary father, who is among the scoffers and who is prepared to manipulate the board into removing his son, whose championship of this crazy project is, to him, ipso facto proof that the boy is not ready for the responsibility. Imagine, making Frankenstein! For Laemmle, it becomes a case of juggling his hidebound father, his mistress, director James Whale, his career, the particular film he might have to jettison in the face of all opposition, and his genuine belief that this much-derided project is not just worth making but a key to the future.

The other two figures whose futures rely heavily on what is about to happen are the two key candidates for the part, Boris Karloff and Bela Lugosi.

Bela is already a star. He lives in a mansion with a butler and he enjoys regular assignations with Clara Bow. But he turned down Frankenstein, in large part because his ego will not permit him to take a part that will obscure his real features and require him to shamble about a soundstage grunting and moaning. He does not see this as an opportunity to emote and he does not see it as an opportunity to cement his stardom. (Not mentioned in the book is that he will play Mary Shelley’s monster in a subsequent film, as one of the replacements for Karloff and as a guy whose star is fading after only a very few years, in large part because he thought he was too big to work on his fluency in English.) He is so openly scornful of Frankenstein that he avoids an emergency meeting with Junior Laemmle. But as the hours grow short, he has second thoughts, further endangering the potentially life-changing assignment for the virtual unknown Karloff, a guy who remembers fleeing England after his family staged an intervention to get him to give up acting.

Karloff is down to his last twenty dollars from a small film he has just finished making, and, unlike Lugosi, he sees the role of Frankenstein as a spectacular opportunity, because he knows that the monster can be sympathetic even if all that shambling about includes killing people. In these last few days he sees the needle pointing back to Lugosi, then wavering toward him, and he also has no idea that Junior Laemmle is also wavering, both on casting and on the career cost of continuing to support the project.

Lives will change because of what happens, a near thing. The studio will change. The genre will change. Many of us who caught the film on TV screens will also change. And it all comes down to a makeup test.

We obviously all know what happened. But Julian David Stone presents this narrative with empathy for all involved and with sheer confidence that the events are compelling enough to provide substantial suspense despite that. This reader was caught up in the uncertainty down to the last few pages, and that is a considerable testament to the caliber of Stone’s achievement, that there should be any uncertainty at all. The moment when Karloff definitely wins the competition, and thus becomes the star he was for the rest of his life, is a triumph.

I was gonna do two books this time. The other was going to be Comparative Anatomy: The Best of Stephen Gallagher (Subterranean Press, $45.00). As it happens, It’s Alive! ate up all my space. So about all I have room for, unfortunately, is the advisory that it exists, that it contains close to six hundred pages of exemplary short fiction, and that it is worth your investigation.