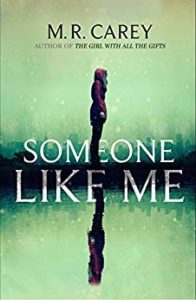 Among the odder recurring tropes in fantasy-based horror fiction is the manifestation of weirdness, a more-or-less evil one, that happens to be met and opposed by another manifestation of weirdness that happens to operate in more or less than same neighborhood. Let us say that a race of vampires invades a town that just happens to be inhabited by, among other things, a likeable psychic whose gifts provide her the edge in opposing them; it’s an awfully convenient circumstance, and one that, much of the time, works out well for everybody involved. Although, sometimes, it doesn’t. Elinor, from Shirley Jackson’s The Haunting of Hill House, has uncanny events in her past, and it doesn’t save her when she enters that dark manse. But still: many stories of the sort follow the essential tradition of Lawrence Talbot as dedicated enemy of Count Dracula, or for that matter, the grown-up psychic Danny Torrance making it his business to fight the immortal predators of the True Knot in Stephen King’s Doctor Sleep, a development which the writer has set up to set up a Let’s-You-and-Him Fight.

Of course, sometimes both antagonists spring from the same well, even if they’re not initially aware of it.

Hence Someone Like Me, the latest from M.R. Carey.

We are introduced to two different sets of characters, both beset by some form of weirdness, and it initially seems a bit much that they both reside in the same neighborhood, let alone that their paths intersect before very long.

The first is Liz Kendall, a divorced white woman who we first see in the act of being assaulted—to the point where murder seems imminent—by her violent ex-husband, father of her two children, sixteen-year-old Zac and six-year-old Molly. Liz is no fighter and seems not fated to survive the attack, but sometime during the event a secondary consciousness overwhelms her own and fights back with deadly force, utilizing a tactic that never would have occurred to her. Everybody thinks Liz just showed extraordinary resourcefulness and toughness in a crisis, but this is not her interpretation of the event. She remembers what the loss of control felt like and cannot shake the feeling that what took control of her over those few critical seconds was an alien presence, driven by rage: a different self, possibly even another aspect of a fractured personality.

The second is Fran Watts, a sixteen-year-old black teen living with what appears to be a dissociative mental illness, following an abduction and assault in young childhood. She has gaps in her memories, suffers from what seem to be hallucinations, among them a protective imaginary friend who has stuck around long after she’s grown mature enough to know better, a sword-wielding cartoon fox named Lady Jinx (who you will love).

About all these two people initially have in common is a past at the Perry Friendly Motel, a now-closed wreck of a place where Liz once formed some happy memories, while Fran formed some nightmarish ones. Liz’s problems with her ex—and with her life in general—are fated to get worse, exacerbated by the possessive nature of the aggressive being who took control of her that first time; whereas Fran’s discoveries about her past are fated to bring her to an understanding of what’s happening with her, down to the actual nature of the cartoonish Lady Jinx.

It’s a terrific novel, hinging on madness, domestic violence, parallel worlds, what you could call evil twins, and as creepy a haunted hotel (okay, motel) as King’s Overlook, albeit much lower rent. Still, it all hangs together, and one factor that deserves to be stressed is that it does not exist in a total economic vacuum. Liz, for instance, is a divorced mom whose thuggish ex is months behind on his child support, and this has a very real impact on the circumstances of a woman who must make her living selling snacks at a movie theatre. The horror of subsequent events include substantial economic ramifications, unfolding in inexorable fashion, from her loss of control.

The overall theme, which your humble reviewer expresses as vaguely as possible in order to avoid spoilers, is the difference between the people we are and the people we might have been, had our life circumstances been even tangentially different; the horrors we could have become, under different pressures, to the people we are now.

One other thing: the book contains many appalling turns and frightening passages, but Carey contrives at least one devastating development that is communicated primarily through . . . typography. Honestly. The book literally includes what one could call, with only slight fudging, a font of horror. It will likely be missed by those who enjoy the narrative on audio. But the moment’s a wowser.

Mentioned in brief: Tell Me Like You Done Before: And Other Stories Written on the Shoulders of Giants by Scott Edelman (Lethe Press), a collection compiling the author’s fantastic literary pastiches, including a few that have been collected before. There are zombie stories echoing John Steinbeck, Thornton Wilder, and William Shakespeare (an actual play), plus other stories rebounding off H.G. Wells, Raymond Carver, Charles L. Grant, Rod Serling, James Tiptree Jr., and Randy Newman. And there are more on top of that. There are any number of tales your friendly reviewer could kvell about at length, but if I must call your attention to only one, and it seems like I must, as I devoted almost all my habitual column length to the Carey, that would be “The Final Charge of Mr. Electrico,” about the last days in the life of the carnival midway performer who, a long time ago, imparted magic to the mind of a young boy named Ray Bradbury. Bradbury never forgot it, and here Edelman gives us a story focusing on what eventually happened to that performer, who sparked one of the world’s great imaginations. It’s a highlight of the volume, here narrowly defined as “the best story in the book, except for all the others.” Check it out, my friends.