I was struck by the detail of the birds, bees, and squirrels returning unharmed after the murder attacks the boy: it shows the crows aren’t attacking life indiscriminately. They seem both frightening and, as we learn, transformative. Icons of horror though they are, is there another reason you chose crows to take that role?

I wanted to tell a story about nature taking back the Earth because I think that is the inevitable next chapter for this planet. It seemed fitting that crows would usher in this new era. There was a season during my childhood when almost every morning there would be two or three crows perched outside of my bedroom window. I remember feeling uncomfortable, as if they were watching me or carrying some ominous message. Years later I would learn that crows actually do recognize human faces, and in folklore from various cultures, they are spiritual messengers. Crows put me on guard. I don’t necessarily fear them, but I respect them. And I will listen to whatever they have to say—even if it’s just a caw!

The desperation, struggle, danger present in leaving the house, and distant community in this story is something I think a lot of us can relate to. When did you start working on this story?

I actually started writing “Caw” several years ago. I started with the poem:

With eyes so black
And feathers fine
This crow has taken
what was mine.
Glare so piercing
Voice so raw
It ripped my soul out
With one nasty caw.

I have a spoken word background, and I toyed around with the idea of writing this story completely in verse, but ultimately I decided to set the story aside. Every story has a birth date, and it just wasn’t time for this one to be fully born. I picked it back up while sheltering-in-place during the pandemic. The isolation of the pandemic coupled with the state-sanctioned murders of unarmed Black Americans put me in the emotional state that I needed to push this one out—fear, despair, relief for sanctuary, with a little hope mixed in. This story is very much a reflection of what I’ve been feeling over the last eighteen months.

Many apocalypse stories ask whether we unite or further divide when faced with disaster. “Caw,” seems to say firmly that we do both. Was this story more difficult to write and/or more necessary, now that we are living through an apocalypse where the extent to which it affects each of us is dependent on our race and class?

Living through COVID-19 made it absolutely necessary for me to tell this story. We are all being impacted by the very best and worst of human behavior right now, and the consequences will be felt for decades. I would like to believe that humanity will ultimately choose unity in an apocalyptic situation, if only to increase our chances for survival, but human history contradicts this. Even now, people still refuse to take the necessary steps to ensure their safety and the safety of the broader community.

“Caw” and the drama that ensues in that abandoned house is just a soundbite of what we’re experiencing in real life. Desperation exacerbates distrust and fear, and ailments like racism and sexism/misogynoir become safety blankets. In “Caw,” our protagonist goes through many transformations, not least of which is the decision to stop catering to the comfort of others, and start unapologetically leading. Everyone in that house must overcome some level of bias and distrust to give themselves a fighting chance for survival. It’s not easy, and there is more resignation than resolution, but such is life.

As I said before, the crows are frightening and damaging, but they also cause a radical new form of life. Your serial novel, Carnivàle, is about a post-apocalyptic world that shines light on the absurdity of our own. When you write stories like this, how do you balance the destruction inherent in apocalypse with the revelatory, transformative nature that its etymology implies?

I don’t think there is a conscious effort to “balance.” I do try to tell a human truth. Humanity isn’t all self-destruction and chaos. There is also joy and resilience that keep us going through hardship. Carnivàle is a very dark story, and focuses more on resilience than joy. The thing about resilience, though, is that it can’t exist without hope. I anchor myself and my stories on hope. As they say in the Black church, “this too shall pass.”

What else can we expect from you in the future?

My focus for the remainder of 2021 will be long-form fiction. I am completing the final chapters of Carnivàle and it will be released as a complete novel by Broken Eye Books in 2022. You can read the serial now on the Broken Eye Books Patreon (bit.ly/3z4Qu43).

I am also putting the finishing touches on a novel about a teenage werewolf, her pack of dogs, and a quest for a world where shadow creatures can finally stand in the sun. It’s tentatively entitled Dog and I’m really excited for the world to read it.

A couple of my short stories will be featured in anthologies releasing this Autumn. For the latest, please visit wcdunlap.com or follow me on Twitter at @wcdunlap_tales. 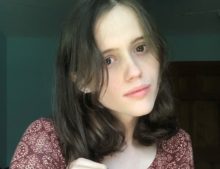