In “Feminine Endings,” much of the story focuses on the idea of seeing and being seen. You write a lot about that here, that idea of what is noticed, yet the horror in the story is that constant observation, the unending looking; so I was wondering if you think that one of the keys to horror is the idea of exaggeration?

I don’t know that it’s exaggeration. I mean, in that story, the moment of horror, people just sort of chug along with the story, and then the first moment they become uncomfortable is the moment that they realize that the observation has gone beyond simply the observation of somebody standing and having an unrequited love. The moment they realize that the person talking has been in your room, has been looking on your computer, the moment in that letter where the narrator, the letter writer starts talking about “Your password is . . .” and people realize Oh my god, you’ve read all their emails. The moment that he’s talking or she’s talking, because you never know the gender of the narrator, the moment you know that the observer has been going through her laundry, her dirty laundry—it’s an absolute visceral moment of horror. Because boundaries have certainly been transgressed. It is okay to observe and be observed, but it’s not okay to actively move in, and then the creeping horror starts to come as you realize that actually, the line about getting up in the night and micturating, and walking past and not being seen, and you’re going, “Oh my god, there could be somebody in my house. Somebody so still that I never see them.”

This is an epistolary short story, and the nature of a letter is that it is one-sided: it is not a dialogue, it is not a conversation. How much did the form influence the content? Or did you know what kind of story you wanted to tell, and—

You couldn’t have told that story without it being epistolary. Because (a) It has to be a monologue, and (b) it’s leading up to that final moment of “I’m talking to you, and you’d better look round this room because I’m here somewhere.” And that came straight from the prompt, that came from getting an email that said, “Would you like to write a love letter”? And I’ve always liked writing love letters [ . . . ] I’ve written at least one other in the Who Killed Amanda Palmer book. There’s a photo of a 1950s Amanda with her head in an oven, and I wrote a love letter in which you gradually realize that the person writing the love letter plans to own her and destroy her and crush her into this sort of 1950s box, and you absolutely understand why this woman has put her head in the gas oven—from something that is nothing more than a protestation of undying love and an exploration of this person will want for nothing, and will need to do nothing ever again.

You were talking about the ending of the story, where you know that the statue is there, and you start to have this just absolutely horrifying reaction, “Oh my god, someone has been here,” and the thing is that the statue says, “You’re not going to notice me until I move which I find that I have to move just a little bit to make you notice, to make you see.” Which is the statue stepping outside of the essence of what it means to be a statue, and so completely transgressing that idea, you’ve got this tension between being something you are and being a counterfeit version of that, and so I was hoping you could say a little bit about where the horror inherent in that tension comes from.

The one element in that that is true-ish—but moves into fantasy—is the idea that somebody would be so still you would take them for an object. That mere stillness means that you do not see somebody, and that a tiny movement will actually allow you to see them. Which is all fictional—those things are not really true; human beings are never perfectly still, even human statues (if you ever stand and watch them, they’re never perfectly still, and also our eyes are perfectly capable of taking in information from objects that are completely still, even in the dark). What’s nice is you set that up early in the story, as the person simply says, “You know, people will walk past me as a statue, I need to make tiny movements in order that they will see me.” And so you just establish something that is not actually true, as true in this fictional world and true in a way that then creeps over and blends into reality because it feels true-ish enough that it could be real. So you’re heading toward that inevitable ending, where the person says, “I’m going to move.” When you’ve finished reading this and you turn around, I’ll move, and then you’ll see me. And that is the essence of horror—it’s the knowledge that there is an invader here, and they’re about to reveal themselves to you, and there’s also [the question] of why: Why are they going to reveal themselves to you? And the person who’s doing it [is] kind of hoping you’re going to react with love and with delight, but they—

Are they really hoping that?

That’s definitely one of the options that they list.

[Laughter] That was not the question that I asked you!

I think it is definitely assumed that the reaction may be, and probably will be, significantly less impressed.

There is both the idea of not being seen, and the idea of being falsely seen, which the statue talks about: I’ve reconstructed your entire life; I know your email and your MySpace accounts; I follow you; I know all these things about you. But that is going to be a false reconstruction: You’re not going to get to know the real person from that. So which is worse: Being seen as someone else’s idea of you, or not being seen at all?

You’re always being seen as somebody else’s idea of you. And most of us are never seen at all. And are surprised to be seen. What actually is very off-putting these days is that people see more than you think they do, and see you when you do not believe yourself to be under observation; that in itself is peculiar. I will occasionally be taken aback—and I’ve lived much of my life relatively publicly—[when] somebody I don’t know in a strange city will wander over to me and say, “So, uh, how’s Princess doing? She must be pretty old these days.” And I go, “Aaaah!” And then I [think], “Well, I post photos of Princess, I talked about the fact she’s twenty-one  . . . stuff is out there in the world, why should I be freaked out that a complete stranger has gone, ‘This is Neil Gaiman, I will start a conversation about something. I am slightly socially awkward, I will try and break the ice, let me talk about—’” and you know, they will go straight in, they won’t even go, “Oh, hello, I read your blog when I was—.” It’s just “How’s Princess? She must be pretty old,” and suddenly it’s just like: [talks in faux paranoid voice], “Are you following me?

Since Nightmare is a horror magazine, do you want to mention a few people who scare you? Writers. Preferably. Not generally scary people.

Robert Aickman. Robert Aickman, of all of the horror writers that ever were, Aickman wasn’t one of them. Occasionally he was accidentally one of them. He wrote things he called strange stories, and they’re about people who get destroyed a lot of the time, or people who have eruptions of the strange into their life. The least successful Aickman stories tend to be the ones that actually belong to the recognizable world of horror or ghost stories, the rules that we understand from the world of horror or ghost stories. The most successful ones are the ones where you went, “I don’t really know what happened.” Because the eruptions of what—for purposes of this interview, we’ll call the supernatural—into one’s life are always by definition inexplicable.

[Editor’s Note: This was an interview conducted over lunch while Neil was the Guest of Honor at the International Conference on the Fantastic in the Arts (ICFA). After the last question above, he had to run to his next event, but he offered by email the following list of other writers of scary stories that he would have recommended, and that he would have spoken about, had he had time: Ramsey Campbell, Shirley Jackson, Lisa Tuttle, Joe Hill, and Stephen King.] 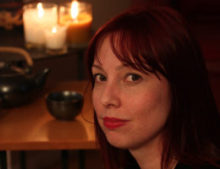 Kat Howard is the author of Roses and Rot, named one of the best SFF books of Summer ’16 by Publishers Weekly. Saga Press will also be publishing her next novel, An Unkindness of Magicians, in September ’17, and a short fiction collection, A Cathedral of Myth and Bone, in early 2018. Her novella, “The End of the Sentence”, co-written with Maria Dahvana Headley, is available from Subterranean Press. Her short fiction has been published in a variety of magazines and anthologies, a finalist for the World Fantasy Award, and performed on NPR.