Where did the inspiration for “Sawing” come from?

I’d gone to the Oakland Museum and seen the original of the photograph Migrant Mother, by Dorothea Lange. It’s a very powerful portrait of a woman migrant during the Depression, and for some reason I’d never seen it before, and it really haunted me. Then I started thinking about the Depression, and how horrible it must have been to be confronted with two catastrophes at once: the Dust Bowl and the failure of the banks.

I like throwing various settings and ideas into stories and then seeing if they gel. (I don’t actually recommend this strategy, since it doesn’t always work.) This time I tried the Depression, vaudeville magic shows, and one other thing that I don’t want to mention for fear of spoilers, and happily for me they all tied together in the end.

What was the most difficult part of writing this story?

Foreshadowing. There had to be a balance between doing just enough so that the end didn’t seem to come out of nowhere, but not too much or the end wouldn’t come as a surprise.

The abuse of power seems to be a frequent theme in your works; is this a deliberate choice or an unconscious one? Can you tell us more about it?

I like writing about people who don’t usually have their stories told, who have been ignored by history, who are just trying to get by in hard times. I haven’t thought about abuse of power as one of my themes, but maybe it shows up as a consequence of writing about these people, who tend to have very little power.

Congratulations on the recent publication of Weighing Shadows! You have a number of novels and short stories published; what does writing a short story do for you that a novel doesn’t?

To me, short stories and novels feel like different things. You get to spread out in a novel, to take your time. With a short story everything is more condensed, so every word counts. It’s just as hard as a novel, but in different ways. So I guess the answer to your question is that you use different muscles for each.

What else can we look forward seeing from you?

I have a story coming out from Asimov’s Science Fiction, “The Catastrophe of Cities.” After that, I’d really like to get started on another novel. 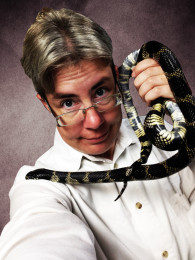