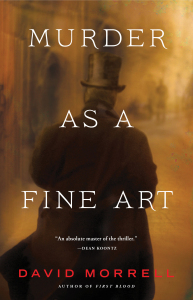 Someone told us that there’s an eerie true-life background to “For These and All My Sins.” Can you share it with us?

A couple of times, weird things happened to me that gave me ideas for stories. “For These and All My Sins” was the result of one of those eerie events. In the 1970s, to research a novel called Testament, I spent thirty-five days on a survival course in the Wind River Mountains of Wyoming. If anyone’s curious, the course was conducted by Paul Petzoldt’s National Outdoor Leadership School and trained its students in a variety of mountaineering skills. At the time, I lived in Iowa City, where I was a literature professor at the University of Iowa. After I descended from the mountains, I drove back home along Interstate 80, but my car developed engine trouble, and in the Nebraska panhandle, I had to leave the highway, hoping to find a mechanic. That’s when I came to this very unusual, very scary town. What I saw there and how the town’s residents reacted to me are described in the story. Even the tree that I describe was there. Of course, the plot is invented, but to this day, I often wonder how that town came to exist and whatever happened to it.

The title suggests a religious topic. Do you often explore religious themes or beliefs in your work?

“For These and All My Sins” is religious only in a medieval sense. But occasionally I do incorporate major religious themes—such as how religion has historically been associated with violence and mass murder, in ancient Rome, in the Crusades, the Inquisition, Ireland, the Middle East, etc. In 1985, I wrote what became an influential espionage novel, The Fraternity of the Stone, which dramatizes this topic. One of its characters asks, “How much killing does God need?” In another espionage novel, The Covenant of the Flame, I imagine that Mithraism, the dominant religion of the Roman Empire, survived into the twentieth century, which isn’t a stretch—because in Spain, the Basques have rituals that can be traced back to Mithraism two thousand years ago.

Is setting more important in horror than in other types of fiction? Do you think whether a particular story will be read as horror has a lot to do with tone and atmosphere versus plot?

Setting’s important in any story. It’s always a matter of how the location is used. In “For These and All My Sins,” the strange town is clearly essential to the narrative, and I had the advantage of bringing an eye-witness authenticity to my description of it. But whenever I discuss the essentials of horror, I always invoke Douglas E. Winter’s famous theory that genres are defined by the emotions they create. In that sense, thrillers are about excitement, mysteries are about puzzlement, science fiction is about awe, and so on. Considered in that way, horror is about fear. It doesn’t need to be “Oh my God, look at all the blood!” In fact, my own preference is for Val Lewton subtlety. I think the heart of horror is the reader’s identification with characters who suddenly feel that they’ve stepped into a cupboard of reality in which something feels very wrong. That definitely happens in “For These and All My Sins.” Several years ago, there was a Showtime anthology series called Masters of Horror. “For These and All My Sins” was scheduled to be part of the series. I wrote a script for it, but I could never satisfy the producers because their view of horror was blood flying while my view is based on a character always looking over his shoulder.

What is it about isolation that’s so inherently scary?

I’m not sure it is. I’m an only child. I spent a year in an orphanage when I was three. My mother and stepfather fought all the time and pretty much left me alone. As a writer, I’m quite happy to be alone for hours and hours. It always puzzled me that I knew talented writers who didn’t accomplish much because they were always on the phone and going to lunch and getting together with people. Then I learned about the Myers Briggs definition of introvert and extrovert. An introvert is someone who gets renewal and refreshment from being alone while an extrovert gets renewal and refreshment from socializing. If I go out with friends two nights in a row, I feel exhausted while some of my friends are ready to socialize every night. I hear about prisoners put in solitary confinement and going crazy. In my own case, I suspect that as long as I was left alone and given food etc., I would happily lie on a bunk, close my eyes, and tell stories to myself.

You show a deft hand for pacing. Do you have any tips for writers on how to keep things moving?

Elmore Leonard once said that the secret to pacing is to cut out the dull parts. It’s a humorous line, but I’m not sure it’s helpful. How do we know what’s interesting to someone else? I suspect that this is an innate skill in some people. In my writing book The Successful Novelist, I tell an old story about two prisoners in a penitentiary. One has just arrived, and an elderly inmate is showing him how things work. At lunch, an inmate jumps up and shouts “Forty-three!” Everyone laughs. Another inmate shouts, “Twenty-six!” Everyone guffaws. “What’s going on?” the new inmate asks. His guide responds, “We’ve been here so long that we know everyone’s jokes, so we just assigned numbers to them.” The young inmate nods and jumps up, shouting, “Eleven!” No one reacts. “What’s wrong?” the young prisoner asks his guide, who responds, “Some people just don’t know how to tell a joke.” I think a lot of it has to do with our body rhythms. If a writer’s internal speed is thirty miles an hour, that’s how the story will come out. Years ago, Knopf released three novels by James M. Cain in one volume. It was called Cain X Three. I didn’t know anything about Cain at the time, but I was struck by something that Tom Wolfe said in his introduction, that reading Cain was like getting into a sports car that was up to eighty miles an hour before you could shut the door. So I tried to get myself up to eighty miles an hour before I started writing. The best texts for speed and efficiency are Cain’s The Postman Always Rings Twice and Double Indemnity. Reading Cain, I discovered what the standard was. Years later, I was flattered when Stephen King, teaching a writing class at the University of Maine, had only two texts: Double Indemnity and my own First Blood, which is heavily indebted to Cain.

What are you reading and/or watching these days?

For the past five years, I’ve been in Richard Matheson/Jack Finney mode. Taking an example from Bid Time Return (aka Somewhere in Time) and Time and Again, I’ve been trying to convince myself that I’m on the harrowing fogbound streets of 1854 London. In 2009, my fourteen-year-old granddaughter Natalie died from the same rare bone cancer (Ewing’s sarcoma) that killed my fifteen-year-old son Matthew in 1985. To distract myself from unbearable present time, I fell under the spell of one of the most brilliant and controversial literary personalities of the 1800s, Thomas De Quincey, who was the first person to write about drug addiction in his notorious Confessions of an English Opium-Eater. He invented the word “subconscious” and developed psychoanalytic theories that predate those of Freud by half a century. He also invented the true crime genre in “Postscript (On Murder Considered as One of the Fine Arts),” his blood-soaked recreation of the first publicized mass murders in English history, the Ratcliffe Highway slayings in 1811. De Quincey influenced Edgar Allan Poe, who in turn inspired Sir Arthur Conan Doyle to create Sherlock Holmes. Trying to escape from my grief, I immersed myself (like a Method actor) in the atmospheric world of 1854 London. My first novel about Thomas De Quincey is called Murder as a Fine Art. It’s as much a horror novel as it is a historical mystery and a thriller. The goal of my intense research was to try to make readers believe that they are truly in that long-ago brooding universe. A sequel, Inspector of the Dead, will be published in March of next year.