Growing up, there was a cabin near my elementary school that had a local legend attached—a witch that ate children lived there, of course. There’s nothing inherently spooky about an old house, and yet we make it the setting for many of our darker narratives, and in the case of “Where Angels Come In,” it’s far more than just an old house. What do you think it is about these spaces that gets us writing and reading the scarier stuff?

Old structures intended for human habitation often transmit a sense of the previous occupants and of past times. Attributing a sinister nature to those former occupants, as well as imagining their lingering influence, often coincides with the level of rustication or dilapidation that has taken hold of the place. Age insinuates a new character. It’s perfectly natural to respond to this sense of a place with a shudder. But that’s also far too rational an explanation. When we imagine the full variety of the lives that were experienced inside an old building—the intensity of the pain, tragedy, misery, ecstasy, joy, loneliness, terror and love, the life and death, that may once have been very real beneath that roof—do we not sense, when we are there, that at certain times these former experiences, personalities and events can manifest in strange ways around us, or inside us, as influences?

Can you tell us a little more about how this story is influenced by M. R. James?

The homage to James is more in the spirit of the master than anything else. He certainly wouldn’t have written in that style, nor from the point of view of a young child. In some ways it’s an antithesis to James, in that the narrator lacks the erudition and sophistication that a Jamesian scholar or narrator would command. But the touch of the supernatural within it—the glimpses and suggestions of something demoniac and ghastly—was my tribute to James. Also, the statues in the overgrown garden are all depictions of “things” that feature in his actual stories.

What inspired you to draw on the insight of fear of ridicule trumping all the other fears associated with the house?

Because kids, and particularly boys, will do the most imbecilic and dangerous things to meet the approval of a peer group, or one dominant ape, I mean, individual. I wager every single adult man and woman could look back on a formative experience and cringe at how they were led, or coerced, or tricked into doing something absurd and reckless in the hope of winning approval. With boys and young men, it is so often the question of courage that leads to dares and potentially life-threatening antics. I once worked with a disabled man who’d shattered his neck. His life-changing accident had been the result of sublimating himself to the internal pressures of a group of boys. He’d dived into water that was far too shallow and had broken his neck as a result. It took years for him to be able to move again, because of one thoughtless act on a hot summer afternoon amongst his friends. Young boys goading each other into a local house with a sinister history is probably as universal as the behaviour of children gets.

I’d say with communal contagion, or a pandemic, then the picture becomes much bigger within our minds. It’s not about one person—us—becoming ill, which is bad enough, but there is the risk of society collapsing too, of chaos and of that chaos changing the familiar into the unfamiliar, and of us not being able to fend for our loved ones and dependents, or to get help for them if they become ill.

In my story, the contagion is shame within one small community; those who fail at the task of going over the wall are, quite literally, shunned forever within that community. In young minds, everything is at stake.

What can readers expect from you in the future? Anything scary coming up for us?

My new novel is called Lost Girl and is set in the near future during runaway climate change and its myriad consequences.

My novel-in-progress is due to be published in early 2017 and will be a novel of psychic terror. Somewhere between those points I’d also like to put out my first short story anthology. 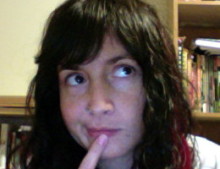 Robyn Lupo has been known to lurk around Southwestern Ontario, complaining about the weather. She helped destroy flash-sized science fiction in 2014 and hopes to wreck poetry for decent people everywhere soon.