This story has such a unique premise and spin on traditional escape stories. What inspired you to write it?

I wrote the first draft of this story in Clarion West in 2017. Each week at the workshop I challenged myself to write something I’ve never tried before. “Family in the Adit” was my week five story and I wanted to try my hand at horror because I had never successfully written a terror and gore story before. I don’t remember exactly what the inspiration was for using a dinner party as the basis for the story, but I remember latching onto the idea because I could use the meal courses as natural section breaks. I had no idea if the horror in the first draft worked until one of my classmates came to check on me, after reading the story, to make sure I was okay.

“The Family in the Adit” has so many twists. You use foreshadowing adeptly, but you never explicitly reveal or hint at the twists. We can only see in retrospect where you’ve hinted at something unexpected. How did you craft this story to be surprising, yet have such inevitabilities?

There was something Connie Willis said in the fourth week of Clarion West that stuck with me. She said you can tell the reader anything, even the ending of the story, in the first paragraph and you can get away with it. I wanted to test that theory for myself.

So, I wrote this story with the first line as a spoiler, which meant I knew the ending from the start, and that influenced everything that followed. I got the shape and the main beats and twists right in the first draft, but reworked the story and added telling details in later drafts. It took me a long time and many revisions to get the ending of the story right, which I still maintain is the most difficult part of horror stories.

But because of that first line, the Wife and I always had an understanding that she was going to stab the dinner guest in the back at the first opportunity, and we worked from there.

You’re a graduate of Viable Paradise and Clarion West. How did those programs influence your writing in general and this piece in particular?

Well, I think it’s telling from the first two questions how by week five of Clarion West I was thoroughly stewing in ideas from my classmates and teachers for this story.

In terms of my writing in general, both Viable Paradise and Clarion West had a profound effect on me. I attended Viable Paradise very early in my writing career—I was only writing for two or three years at that point—and that workshop was such a confidence booster for me, like maybe I was okay at this writing thing after all. It also gave me an entrance into the speculative fiction writing community, and that changed everything for me. I went to Clarion West when I was just at the edge of breaking through as a short story writer. I think Clarion West gave me that final push. It also gave me a new community and friends I’m in contact with almost every day. Which has been a lifesaver during the pandemic. I was actually playing Among Us with some of my Clarion West classmates when I got the acceptance email for this story. So I got to give them the good news live.

I just want to add for any upcoming writers who are reading this and dismaying because writing workshops are not in the cards for them right now, that workshops aren’t necessary for a successful writing career. They aren’t the only way to find your community. I probably would have gotten to the same skill level and found a community without them, it just would have taken me longer.

This story reads as a commentary on slavery—both in the traditional sense of forced work, and in the sense of oppression from a more powerful and sinister person. What were you hoping to achieve in writing this?

That’s a great read of this story. I wasn’t thinking of slavery per se as I wrote this. Kij Johnson, our second week [teacher] at Clarion West, said something to the effect that good people aren’t the ones who manage to survive horrific systems or catastrophes. And that both fascinated and horrified me. I wanted to dig into that idea by writing a story that explored how greed, selfishness, fear, and a terrible, perpetuating system leaves no one innocent. How the victims in these systems don’t necessarily hurt the people in power, but other victims.

What can we look forward to from you?

I can’t announce the details yet, but if all goes well, I should have a new novelette out sometime in 2022. 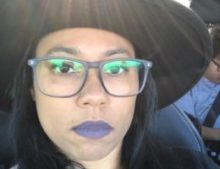 Tonia Ransom is the creator and executive producer of Nightlight, a horror podcast featuring creepy tales from Black writers. Tonia has been writing horror since the second grade, much to the dismay of the teachers. She is currently working on her first audio drama series, described as a podcast version of American Horror Story meets Superstition. Tonia tells horror stories regularly on Twitter, and in her spare time, she loves to hike, but normally chooses to sleep in instead. She lives in Austin, Texas (regretfully, during the summer)