As a writer and as a reader, I usually find myself drawn to character-driven stories. I found the opposite to be true in “Sharp Things, Killing Things,” as it’s hard to say if there are any characters in this story at all. Instead we have several names operating under the collective “we,” serving the story’s theme of collective responsibility. Where did this unique perspective come from?

An excellent question! This is my first time experimenting with the first-person plural, and I had no idea whether it would work. I’ve seen it done very effectively, for example Alice Sola Kim’s excellent “Mothers, Lock Up Your Daughters Because They Are Terrifying,” and I wanted to give it a try. It just felt right for this particular story. In addition to what you pointed out about collective responsibility, I hoped it would give the story an uneasy, dream-like (or nightmare-like) quality and put the reader off their guard. I wanted things to feel uncertain, not knowing precisely who is talking to you as the reader, or even how many people are involved in a particular scene at any given time. While I do mention names, I like the idea that even the characters themselves aren’t certain who is part of the group at all times. This goes back to the idea of being caught in a dream where things and people suddenly appear and disappear, or the setting shifts without explanation, and unless you’re a skilled lucid dreamer, you are not in control and just have to roll with it.

The use of masculinity as a toxic system used to avoid thinking about feelings or accepting responsibility is woven throughout the story. That said, who is really responsible for the suicides?

Another good question, and in the case of this particular story, I’d say the suicides really are a matter of collective responsibility. There is definitely a supernatural presence out there making a point, but it’s about people, too. I wanted to evoke the feeling of a small town where everybody knows everybody, but where there are certain things that aren’t discussed. They all know each other on the surface, but they’re afraid to go deeper, check in and see if their friends and neighbors and even their family members are really okay, because at the end of the day, they don’t want to know. They want to preserve the illusion that it’s an idyllic town where nothing bad could possibly happen. So things get brushed under the rug; there are things everyone knows, but that they choose not to see, because it’s “not their business,” and because those truths are too uncomfortable. As a result, abuse goes unchecked, loneliness and isolation flourish, and people don’t get the help they need because they’re expected to tough it out and deal with their own problems.

What will this town look like five years after this event?

Sadly, I’m afraid it will look much the same. These are the kind of people who probably won’t learn their lesson. They’ll grieve for a while, they’ll hurt, maybe things will briefly get better, but then they’ll sink back into their bad habits. They’ll forget, tell themselves it was an aberration, and go back to pretending that everything is okay and they live in a happy place where nothing really bad could happen. Hopefully there will be one or two people at least who do finally make it out though, because there has to be some hope to counteract the bleak, right?

I’m endlessly charmed by American gothic in horror, and I feel intimate with Americana as an element in horror, even though I’m a Canadian. I see you’re also from Canada, although now living in the United States. Has this move changed your relationship with American horror?

It’s always nice to meet a fellow Canadian! Living in the US may have changed my perspective somewhat. Being immersed in the culture has probably given me more of an appreciation of, or more context for, the fears reflected in American horror. Similarly, looking back, I can probably appreciate more of the subtle differences in themes, as well as the similarities, in American versus Canadian horror.

This piece was my introduction to your work, which surprises me as I see you’re very prolific. For others new to A.C. Wise, would you say that “Sharp Things, Killing Things” is typical of what you usually write, or is it very different? In what ways?

Both? As I mentioned above, the voice/POV was a bit of an experiment and departure stylistically, but I think there are other elements, themes, and a general overall feel that carries from work to work. It’s horror, which I write a lot of. I’ve also written several stories with the small town American gothic feel. I like moody fiction, ghosts and hauntings, and stories where encountering something creepy—in this case, a billboard—infects the characters in a way and spreads outward from that first moment to become a larger haunting. So in that sense, it is typical of the kind of things I like to write.

I have a handful of upcoming short stories, but I’ll stick to mentioning the two where I’m relatively certain about the details. “Into the Green” will be included in the anthology Looming Low Volume II, which comes out in October 2022, and “The Dark House” will be published at Tor.com sometime in February 2023. Other than that, I’m working on a new novel and a novella. Hopefully they’ll both work out and someone will agree to publish them! 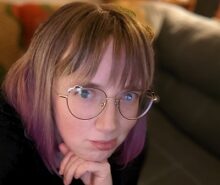 Dawn Davis (@playerprophet on Twitter) is a queer writer, editor, and storyteller living in Halifax, Nova Scotia, Canada. She spends her days juggling her interests in reading, writing, drawing, wildcrafting, playing video games, and rescuing cats. Her ultimate goal in life is to tell stories that make you cry.