This is the murderer of the two teenagers last Christmass on Lake Herman Road and the girl a few weeks ago in Vallejo. I phoned a lady dispatcher at the Vallejo Police Department, but she didn’t take me seriously. So as not to risk that now, I shall reveal the following details not available to the public:

1. The brand name of the ammunition for the Christmass killing was Super X. I fired ten shots, leaving the boy on his back with his feet to the car and the girl on her right side and her feet to the west.

2. For the more recent killing, the girl was wearing patterned slacks and I used Western ammunition. The boy was shot in the knee.

I hadn’t planned to write my first letter until I’d developed the proper voice and taken at least twelve or thirteen victims, but I saw something extraordinary tonight and it has me thinking big things.

A man just—walked—on the Moon.

I saw it right here on my mother’s awful television, as cloudy and grey as her left eye. A little man in a heavy white suit went down a ladder and he said that he was taking a small step for a man but a giant one for mankind. The news people helpfully put LIVE FROM THE MOON on the screen. I think they should have put GODDAM MOON there for good measure.

Like the rest of my neighborhood, I went outside afterward. Some kids down the street set off firecrackers and there’s a little boy marching around in long slow strides with a bucket on his head. Their parents are sitting out in lawn chairs with beer bottles heaped at their feet, staring up into space like there’s any hope of seeing the glint of that tiny lander.

I understand the impulse to look up, though. To wonder.

I wonder if there will be women on the Moon someday. They’ll have to be thin and pretty of course with all of that training, the kind who don’t look twice at the wrong men. What will they wear under their suits? Will their boots have heels? Will you see their flowing hair in their helmets or the curves of their breasts under the silver fabric like in all the movies?

I wonder who will be the first to kill one. Will it be the timid geologist who only wanted her soft warmth on his narrow metal bunk? Will it be the strapping Mission Commander whose heroic seed cannot be wasted lest it blast a hole in the Lunar Module? Or maybe it will be the man no one ever sees with the wrench in his hand and the grease under his nails.

I wonder how he will do it. There must be lots of ways. He can pull an air hose and let her life hiss away to a sleeping silence. He can drill a hole in the side of her helmet and let the plume of her decompressing blood and brains spray in a graceful arc to the soil. If he doesn’t want to fiddle around with that, he could simply shoot her; the bullet would go a lot farther if he missed the first time. Maybe she’d be watching it with awe and disgust when the second one got her in the lady parts. That is where he’d have to aim, with all the junk wrapped around her chest where the heart hides.

And then she’ll be there. She’ll be there forever, and as the Moon sweeps over our heads, we will know that she’s there, that there is a dead woman on the Moon, and the whole thing is nothing more than a giant glowing tombstone.

They’ll probably catch the man who does it. Maybe they’ll have a trial for him on the Moon, make a little courtroom on the Mare Crisium, the sea of crises. If he’s smart, he’ll ask for a death by hanging, but they could just as easily put him outside to pound frantically on the reinforced portholes until he totters like a felled tree into the dust.

We will know his name, though, and we will talk forever about why he did it.

I used to think the perfect crime was not getting caught. I was careful with those teenagers and they didn’t even see my face, blinded as they were by my lights. I came up on them quickly and they still had their hands deep in each other’s pants and skirts, having a ball; I had a ball, too. The ones who ran didn’t get far, going down where the bullets told them to. They screamed and thrashed and moaned a little, but no one heard.

The blue meannies will never catch me, and it wasn’t even hard. The ammunition is too common and the tire tracks too bald and smeared, and the guns I used are now broken into pieces and spread hither and yon. I didn’t know the victims. I live quietly in a distant neighborhood where the little old ladies invite me in for iced tea after I clean their gutters or patch up the front steps.

I used to think the perfect crime was not getting caught, but watching those men tonight changed my mind.

I will never walk on the Moon. When I am dead, my footprints will be gone.

I used to think the perfect crime was not getting caught and killing as many people as you can, but I’ll never reach the heights of Hitler or Stalin, Johnson or Nixon. I’d hoped to be known for the quality of my hunt—the drama and beauty, not to mention my own untouchable safety—instead of the quantity.

But right now, every wakeful eye on Earth is pointed in the same direction, toward the silver island in the dark, and what I’m learning is that an achievement is not an achievement if no one sees it.

The perfect crime is being seen going 240,000 miles farther than anyone else ever has.

This is my Moon. I shall walk in ways men have never walked and kill in ways they have never killed, and I shall tell you all about it so you can tell the world what heights we have finally reached.

I shall strike with such terror that my victoms will only fully know life at the very end, not just teenagers but adults and maybe some kiddies, too. I shall build death machines in an antiseptic room for my mission, flashlight gun sights and remote-trigger bombs, a black hooded spacesuit to recycle the tang of my own breath. I shall write ciphers that only computers can decode. I was going to write beautiful eloquent letters like a gentleman hunter, but now my words will froth on the page in ways that are not exactly mine.

I shall take my name from the eternally watching heavens, but I will not give it to you yet.

This is my Moon landing, and it will take your own room full of men in narrow black ties and horn-rimmed glasses to catch me. I will shift and wobble in parallax with the stars, not quite myself when I kill or when I write. And even if you do, it is enough to get to the Moon; coming back can only be disappointing.

This isn’t the right letter to send first, I see that now. There is too much of me in it, too much truth, and that’s no way to start a mystery. Much better for you to think that I’m insane, barely in control, my letters slashed on the page like knife strokes instead of neatly typed through three layers of carbon.

What I shall do instead is fold this neatly into a sealed black metal box and bury it so deep that only the ones who come after us can find it. They will live in the world we make, one that much more vivid and artistic, and they’ll want to know who to thank when they send back an expedition from their gleaming bubbled cities in space.

We are now the kind of people who can walk on the Moon, but I am the kind who can kill there. All it takes is one small step. 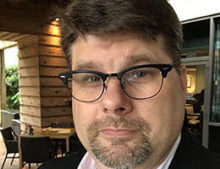 Will Ludwigsen’s stories of weird mystery have appeared in Asimov’s Science Fiction, Alfred Hitchcock’s Mystery Magazine, and many other places including his Shirley Jackson Award-nominated collection In Search Of and Others. He lives in Jacksonville, Florida with his partner, writer Aimee Payne, as well as three cats and a dog who might also be writers of some sort. He blogs at will-ludwigsen.com and tweets as @will_ludwigsen.