Where the Heather Grows

Clara drinks from water bottles so she doesn’t have to hear the tap running. She puts all the dirty dishes in the dishwasher and leaves the building until it’s done running, just so she doesn’t have to hear it. She does everything she can to avoid the sound. Showers, though—those are trickier. She can’t avoid washing herself forever. So she starts the tap, plugs the bathtub, and waits several rooms away until it’s full enough that she can shut off the tap. Then she gets in very, very slowly, disturbing the water as little as possible. With practice, she learns how to keep her movements silent.

Sorry, I just had one more quick query that I didn’t manage to ask when I came to see the apartment this afternoon. I just wanted to double-check that the apartment has no rivers.

I’m sorry, I’m not sure what you mean by rivers? (Might be an autocorrect thing, ha ha!)

I want to check that there are no rivers inside the apartment.

As far as rivers go, the closest is the Schuylkill, but that’s several miles away. You can’t see it out the windows or anything.

And there aren’t any rivers inside?

Every now and then she messes up. She’ll let herself hear water dripping or rushing or pouring or roaring and then the melody will come. The song will trickle into her ears, note by note, line by line. Once the song starts, it’s hard to remember where she is, what year she’s in, what name she has. It’s crucial that she stops it, that she stems the river. If she doesn’t, the flood will come.

The grocery store builds its own world of sounds: the tinny pop music from the speakers, the hollow chiming of the PA system, the rattling of the shopping cart’s wheels against the linoleum. Clara tries to keep those sounds at the forefront of her mind, to let them anchor her to this time and place. It reminds her of being a kid. There was never any song when she was a kid. Well. There were songs, sure. But not the song. Not her song.

She can’t say exactly what changed between then and now, to make her life like this. There was no sudden catalyzing event. It was a slow erosion. She suspects that the river was always there; it’s just that the currents have finally rusted her grip on the present moment enough that she’s become attuned to the river’s flow.

GROCERIES
milk
bread (ciabatta if they have it)
vanilla extract
pasta (linguine?)
brown sugar
maple syrup
eggs there were two sisters where the heather grows
where o’er the river a cold wind blows
a man rode to the sisters’ door
he traveled far to be their woo’er
he courted the elder with a golden ring

“But he loved the younger above all things,” Clara sings softly. Then she realizes what she’s doing and stops cold. Her tongue shaped itself around the syllables before she even knew she was speaking. She doesn’t remember typing that into her phone. Her hands are shaking. A low roar is building in her ears. And still the song is pushing against her teeth—

She clenches her jaw shut as tightly as she can, shoves the eggs into her basket, and walks stiffly out of the aisle. This is the twenty-first century, she reminds herself, not 1843. I’m in Philadelphia, not—not anywhere else. She’s been practicing self-control, and so she manages to hold it back until she’s alone in her car.

She thinks she’s gotten away, that the river has receded entirely, but when she lets out a relieved sigh, what comes out instead is melody. “She said oh sister won’t you walk with me / to where the river flows to sea? / And as they stood on that windy shore / the elder sister—”

Clara shoves her fingers into her mouth and pins her tongue between thumb and forefinger, hard enough that her nails draw blood. She waits there—breath jagged, tasting hot iron like a blade laid against her voice—until the unsung echo of the unfinished verse

stops roaring in her skull.

On the wall above Clara’s dresser are photos of her family. They used to be in picture frames, but the glass cracked during the move. She’s going to buy new frames soon, but in the meantime, they’re secured to the wall with tape. There’s her father, her mother, then both her parents and Clara all together, grinning at the camera. Then there’s one of Clara and her dog. Four photos, all in a neat line. And next to them is the fifth, which isn’t there. Last night, when sleeplessness was pulsing behind her eyelids and there was a roaring in her eyes, she took a pencil and drew a shaky rectangle on the wall where the fifth photo is not.

The fifth photo, which doesn’t exist, is a photo of her sister. She doesn’t have a sister. She never has. Clara’s sister never existed and never lived where the heather grows and never fell in love and never drowned in the river. No musician ever found the body. And there was never any song.

These things are true. Clara’s sure of it. She doesn’t even know what heather is supposed to look like, so she couldn’t have possibly grown up near it.

(except she did, she did)

The same goes for the song. She’s never heard how the song ends.

(except she did, she did)

It’s three a.m. Darkness crowds at the window. She has work tomorrow; she should be getting some rest. But instead, she’s huddled on her bed, frozen with fear, because the river is running through the kitchen. She can hear it. All night it’s been the only thing she can hear.

Eventually, dawn cracks itself open on the horizon. The rush of running water turns to a trickle, then a drip, then yields to silence. She waits, afraid to believe it, too frightened to move. But after an hour she unfolds her limbs, stiff and shaking, and creeps into the kitchen.

There’s no river that she can see. All the taps are shut tight. But the tiles are coated in a slippery wetness, like stones retrieved from a creek bed. She doesn’t notice at first. She finds out the hard way: she walks into the kitchen too quickly and her feet slip out from under her. She crashes down onto the tiles.

She stays there for several long minutes, stunned by the impact, mouth open like a landed fish, feeling the cold tiles pressing against the side of her skull.

She remembers, all at once, how her sister looked as she tried and failed to swim in the tossing waves. From a distance you could almost mistake her for a swan: the outstretched hand an arcing wing, the muffled cries a final song.

She remembers her sister’s shock. Her mouth opened in a wide O, like a hooked fish, as she looked up at Clara in terror and said

sister, reach to me your hand
and I’ll give you all my riches and land
oh sister lend me just your glove
and you shall have my own true love

The silvery notes resound in Clara’s skull, each string plucked singly, reverberating through years and lifetimes.

That didn’t happen, Clara reminds herself desperately. I don’t have a sister and we never lived on the riverbank and I never pushed her in. I didn’t. I didn’t.

Clara opens her mouth to repeat that aloud, to etch the truth into the empty air, but what comes out instead is—soft, lilting—“A musician walked upon the sand / and saw the body float back to land / He made a harp of her breastbone / whose sound would melt a heart of stone . . .”

With difficulty, she forces herself to her feet. She sways and clutches the counter for balance. The song is pouring out of her mouth, and it’s getting dangerous now. It’s too far along in the song. The river is roaring in her ears and, worst of all, she can feel the flood coming in her lungs.

But it doesn’t help. Water is filling her lungs. It burns, impossibly cold. “He went down to the wedding hall / to play the harp before them all,” she sings with her last gasp of air before the water spills into her throat and overflows from her lips. It tastes like silt. She doubles over the sink, coughing helplessly, trying and failing to clear her lungs. River water splatters into the sink. And still her lips move to form the words.

he laid the harp upon a stone
and the harp began to play alone
the first string sang a doleful sound
it cried, yonder the bride’s new ring does gleam
but she drownèd me in the cold, cold stream
and as long as the harp plays its truth so sad
its song will drive the eldest mad

The verses end there, but when the words die away, the plucked-string melody of the bone-harp grows clearer in their wake. Still the river floods her lungs. Black spots dance at the edges of her vision. She heaves, desperate for air but receiving none.

This is it, she realizes. She’s going to die. It’s the imminence of the end that lets her denials drain away. She did have a sister. She did drown her. It was another lifetime, but it was her. Her younger sister had always been so persistent, hadn’t she, and now she’d followed Clara from one life into the next. 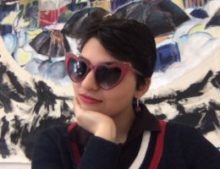 Shaoni C. White writes and researches speculative fiction. Their short fiction has appeared or is forthcoming in Uncanny Magazine, PodCastle and Fireside. Their poetry has appeared or is forthcoming in Fantasy Magazine, Augur Magazine, Apparition Lit and elsewhere. Raised in Southern California, they hold BA in English Literature and Linguistics from Swarthmore College. When not writing or conducting academic research at the intersection of postcolonial studies, queer studies, and SFF studies, they spend their time swing dancing and embroidering. Find them at shaonicwhite.com or on Twitter at @shaonicwhite.