When the Snowshoe Hare Turns White

I grew up at the southern edge of Ontario’s “near north,” and as winters got warmer and shorter, we’d hear stories of people going through the ice. As a kid, I worried about losing family members that way. This story is a response to the loss of northern ecosystems to climate change and how that loss is reshaping families who live in and love the cold.

I was two-and-a-half years old when I saw death for the first time: a snowshoe hare, its brown coat stark against the earth’s white blanket. I watched through the foggy halo of my breath on the windowpane as an owl—white, silent, and nearly invisible as it streaked low—clutched the hare with talons at the back of its neck and carried it away. The hare twisted and screamed as its blood steamed on the snow.

This was my first memory. I remember, too, the days of certainty that followed: I did not understand that the hares I saw the next day or the day after, or a week after that—each animal on a gradient from brown to white until they were all as bright as ice—were not the first owl-seized animal returned to finish whatever business it had started in our yard. A witness to my naive self-succor, my mother tried to explain it, but I only nodded, settling my forehead against the cold window.

These days, snowshoe hares keep their brown coats longer, well into the cold season. What used to be the cold season. Already it seems a long time since my sisters and I would walk to the General with our coats undone and hanging off our shoulders, learning to flirt with the spring breeze as it touched cool fingers to the backs of our necks. Since we unstitched the fox fur trim from the hoods and mom sold them through the mail to some rich southerner.

Well, she would have if the mail had been moving again. Nobody ordered fruit and veg anymore because it arrived black and stinking. But there was a greenhouse now by the community centre. Made from the reclaimed windows of bankrupted cruise ships and rammed-earth thermal mass, with a pellet stove to keep it warm if the temperature dropped. We harvested a bag of greens for every household every other week. But we still needed meat.

When we returned home empty-handed from the General that last day, mom shrugged her parka on. She didn’t do it up. Then she was in the garage, gunning the engine on her snowmobile. When we’d packed our bags for the hunt we knew was inevitable, we found mom picking clots of mud from the machine’s tread.

How long was it before I understood that the white hares that crossed between our house and the lake were not the sustained spirit-echoes of that first animal? That the tangle of tracks in the snow were not left to trick those ghost-white birds from performing their part in the death scene again and again? I don’t know, but it’s all I could think about as I dragged myself home from the spit, following the snowmobile’s caterpillar track across snow and slush. What would I see if I turned and followed that track the other way? Nothing like those meandering hare tracks in the snow—no, my mother had flown off the spit like an arrow as she always had before, my sisters right behind her on their own machines. There had been no warning. No gaping mouth of open water. Just ice that was thick enough to bear our weight. Except for where it wasn’t.

When I woke after a fitful sleep, wrapped in every blanket I could find and with my mother’s electric heating pad trailing out from under my shirt like an umbilical cord, I found myself still pressed against my bedroom door. Despite the heat of my self-made cocoon, I was frozen. What was the meaning of today after last night? Why had I woken up at all? I clenched my teeth, remembering the jaw-locking cold of the water as I rolled across the crackling surface of the ice. The shattering as my snowmobile broke through.

What trail had I made, dragging my half-frozen legs and feet through the snow? What would now follow me home?

Outside my bedroom, the sound of a cup placed carefully into a saucer crashed into my consciousness.

“Mom?” I whispered, rounding the corner into the kitchen. If not a scream, then a whisper seemed the next most appropriate vocalization for this moment. For this hope. What sound had come from my mouth—my lungs—when the breath was shocked from me by the ice cracking, by seeing my mother and sisters go under, by my own sudden immersion in ice-cold water? I can’t remember—in that moment I knew only the sound of the hare screaming as it twisted from those terrible grasping talons.

“Good morning, chèrie,” my mother said, ice flaking and falling from her lips as she spoke. My sisters, seated at the breakfast table, smiled absently at the sound of her voice. Melted ice pooled before them. “I’ve made you breakfast. Come, sit down.”

My mother and sisters established a cold rhythm. Every day, they were drawn to the icefloe. Their strange white skins impervious to the pulsing crush of ice, the black depths. I watched them from the window, my breath bestowing ghostly halos. Every night, they returned to me.

A snowshoe hare is born with eyes open, ready to run from its nest at the first sign of danger. They are creatures born to die. But for millennia, in defiance of death, the snowshoe hare’s fur has turned white. Those that remained brown, or stayed brown too long, were at a disadvantage.

But now, the world is irrevocably changed. Now, the ghost is a brown hare while the white creature slips through the cracks in the ice, into our porous bones, infusing us with its imperative: change and live, change as you breathe—in every moment of your brief existence—and live. 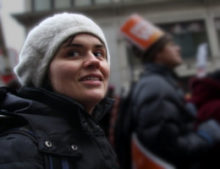 Eileen Gunnell Lee is a Canadian writer, educator, a PhD in English literature, and a child of the South Asian diaspora. She has stories published in or forthcoming from Escape Pod, Reckoning, Selene Quarterly, Fusion Fragment, and others. As Selena Middleton, she publishes academic research on speculative fiction and ecocriticism and is Publisher and Editor-in-Chief at Stelliform Press, a new press for long-form climate fiction and non-fiction. Living halfway up the Niagara Escarpment in Hamilton, Ontario, she regularly meets deer, foxes, coyotes, cloaked riders on horseback, and mushrooms of ambiguous intent. She can be found on Twitter @eileenglee and on the web at specfic.vaults.ca. Stelliform Press is on Twitter, Instagram, and Facebook @StelliformPress and on the web at stelliform.press.