There and Back Again

Published in Mar. 2020 (Issue 90) | 1563 words
© 2017 by Carmen Maria Machado. Originally published in Mixed Up: Cocktail Recipes (and Flash Fiction) for the Discerning Drinker (and Reader), edited by Nick Mamatas and Molly Tanzer. Reprinted by permission of the author.

My mother used to love the corpse reviver. She called it the perfect cocktail. “The thing that sends you away, brings you back,” she’d say as she laid out the ingredients on the dining room table before she went out for the evening. “There is only one door,” she clarified once, when I looked at her in confusion. “You can go out and you can come in, but you always have to pass through the same door to get there.”

I was too young to understand hair-of-the-dog as a concept, much less as an idiom, but there was some sort of clear alchemy happening on that table: the martini glass clear of smudges, the burnished aluminum shaker, the arrangement of bottles and their mysterious liquids, deep red maraschino cherries floating in a pickling jar at the end of the row. It was understood that I was not to touch this arrangement (“None of this is for little girls”), and she would know: my fingerprints on the glass would give me away. This didn’t stop me from inverting the jar to watch the cherries rise like so many jellyfish, and then wiping it clean on my nightgown. But I’d only do that after she left.

And she did leave, once a week. A kiss dropped somewhere in my hair, and she’d walk out the front door and into the humid, mottled darkness.

I’d wait for her. The house felt strange when she was gone; like it’d been shucked from the thing that gave it purpose. The air hummed with her many ghosts: skin cells, perfume, the cobwebs she’d ignored from when we first moved in. I listened for hours for the sound of tires, of the front door opening, of her inky voice exchanging murmurs with a stranger.

The men and women she brought home were beautiful. The women were always dark-haired and curvy—her type. The men looked like they’d been dragged through a dewy meadow. My mother would always offer them a drink, then she’d walk past the stairs to see if I was waiting. Then her footsteps would cut a path toward the kitchen.

“On the rocks?” she’d call. My cue. I’d step into the living room and walk slowly to the body, slumped loosely on the loveseat. Their gaze was always focused on the kitchen doorway through which my mother had disappeared. I could feel them listening to the comforting sounds of ice striking glass, hope stirring through the haze of alcohol.

They were easy to eat when they were like that. Soft. Fermented, almost. And when I was done, she would collect me and take me upstairs, and we would sleep two heavy, parallel sleeps: her besotted with alcohol, me with blood and bone. The next morning, I’d always find her sitting at the table, rolling a silky glaze of absinthe around the inside of the martini glass and staring at the place where the sunlight struck the floorboards.

It was that way for many years, the two of us. And then she died and I was alone.

Learning to feed myself was hard. I’ve never been good with people. Perhaps that seems like a bit of a joke, but I imagine it’s how certain men see the world, too: if all you want is a body, it’s difficult to confront the animated spirit within.

Even when I wasn’t hungry—even when I’d just eaten—it was hard to focus on the ethereal, flickering qualities that made humans individual: a smile, for example, or a voice. They were like crows—I’d been told of their intelligence, their distinctiveness, but couldn’t quite bring myself to believe it.

So I was lucky that I was beautiful, that people let me come home with them even after I’d spent a date barely looking them in the eye. Which is how, a year after my mother died, I ended up at Alma’s place.

I didn’t mean to follow her home. That is, I tried to invite her to my place, but she’d sweetly refused, and I found myself paying closer attention to her than I had to anyone in a very long time.

She smiled shyly and shook her head. I hadn’t been drinking much, but she had, and every tip of her—nose, ears, cheekbones—were slightly flushed. “I’d just feel better if we were at my place,” she said. “More, um, comfortable?”

In the cab she sat close to me, and a few blocks from the bar she opened up my fist—I didn’t know I’d been making a fist—and gently stroked her fingers over my palm. The sensation was so intimate I nearly threw myself out the door and into the street, but then we were in front of her building, and then we were upstairs, and she sat me down on the couch by clumsily pressing both hands on my shoulders. I was still unnerved from the feeling of her fingers in my palm; I so rarely touched people with anything but my teeth, my throat.

The apartment had a curio-cabinet charm, with stone figurines and candles and intricate, draped fabrics. A preserved crocodile head sat on the bookshelf, and the smell of incense—familiar, somehow—lingered in the air. She came out of the kitchen with something amber-gold in a tumbler. I started; I’d been planning on doing it when she’d been there, but I’d been distracted. I couldn’t remember the last time I’d lost focus like this. As a child, maybe.

I drank deeply. I hated seeing this apartment, the corners and tendrils of her life. I wanted to eat and then I wanted to leave.

“It’s fine. I mean, it’s good. My mom used to make really complicated cocktails when I was a kid, and I took secret sips out of a few of them. Never liked them much. This is easier.”

“What would she make?”

“Um, there was this one called a corpse reviver. Like, a hair-of-the-dog cocktail? Just, lots of booze with a cherry dropped in. Oh, and you had to coat the glass with absinthe, first. Really complicated. I don’t even know where she learned it.”

I drained my glass to the ice and set it down into darkness.

When I opened my eyes again, the ceiling rocked gently above me, like a boat bobbing against the tide. Alma’s face swam into view.

“I didn’t actually know if that would work,” she said. “But there you are.” She stood up and stepped over me, and her voice sounded like it was coming from the end of a long tunnel. “Do you know who I am?”

I struggled to make words. “G-girlfriend of a missing person.”

“Good guess,” she said. “Sister of a missing person.”

He’d had the smell of incense on his clothes. I remembered, now. He’d been early on, when I talked to them too much, learned too much. I didn’t remember his name, but he’d talked about his older sister, whom he adored.

“He was living with me,” Alma said. “Trying to get his life back on track after a bad breakup. Lonely, you know? Wanted to go on some dates. And then he went out one night and never came back.”

I turned and retched over the carpet.

“Loneliness is a door,” I said again. “You can go out and you can come in, but you always have to pass through loneliness to get there.”

“What do I have to do?” she said. “Stake through the heart? Silver bullet? What the hell are you? Where is his body?”

“What sends you away will bring you back,” I said. “I ate your brother. Every part of him.”

“Do I have to eat you?” she said. Her voice was low and sad.

“Hunger is a door. You can go out and you can come in, but you always have to pass through hunger to get there.”

She knelt down over me. She was holding a chef’s knife in her hand, both of which were trembling. “I just want my brother back.”

I grabbed her shirt and pulled her down close to my face. Through my disorientation, I opened my mouth wide enough, so she could see. So she could really see.

“Vengeance is a door,” I said, my voice rippling through cities of teeth, forests of muscle, miles of esophagus. “You can go out and you can come in, but you always have to pass through vengeance to get there.” I reached up and circled the knife’s blade with my hand. “So pick your door.”

She left me, alive, in an alley in a neighboring city, upright next to a dumpster. “There are always windows,” she said as she got back into her car, but I couldn’t tell if she was talking to herself, or to me. 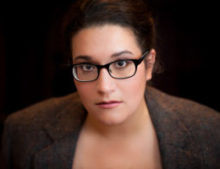