There are customary ways to begin a letter and end it, to address the envelope and set it to post. We have delivered to you (while you slept so prettily, your pale face a serene oval in the moonlight) this polite and improving manual of letters for the Fair Sex. We know you will be grateful.

Do be aware that some correspondences may involve vows of fealty, freshly spilled blood, supernatural appeals to divine beings, and sacrifices of unusual scope.  A modern lady avoids squeamishness about such matters, and we expect you to do the same. Swat away the black fly that has appeared by your ear and pay attention to our advice.

Firstly, the address of the writer should appear in the top right-hand corner of the letter with a road number if available. If the house has a name, insert that first: Phillips Hall, 194 Angell Street, Providence.  A formal date will include the day, month, and year as well as lunar phase (Last Quarter) and pertinent zodiacal information (Venus in retrograde).  Among friends, the day alone will suffice. If the passing of time has blurred in your mind, a brief description of the weather is standard: Dreary gray, Pummeling rain, Pea soup fog.

You should not have written to the neighbor’s son as you did, Susie. Luckily we intercepted the note and set it afire in his fingers.

The usual endings to letters are Yours faithfully (business) and Yours sincerely (informal), prefaced by the phrase “I remain” for more formality. The closing Your Most Humble and Obedient Servant is expected when writing to any member of the clergy or government. The intimate closing Yours ever is reserved for intimate relationships, of which you are not allowed. Women should indicate their title (Miss or Mrs.) with a small signature. Married women take their husbands’ initials and men may always add in titles or distinctions. Women do not have titles or distinctions.

The model letters we’ve provided should not be copied slavishly, but emulated for their style and brevity. By assimilating their grace, you too will be able to express yourself with good intention and freedom. Samples that might be particularly useful in the decades to come include:

It would be thoughtless of us to assume your spelling is equal to that of a gentleman, as your scholarship has often been interrupted by the duty of caring for others. Be aware that often a word will include letters that are not pronounced; as,

The English language has nine parts of speech (noun, pronoun, verb, participle, adverb, conjunction, interjection, preposition, and entreaty.) We do not use gendered words as some inferior languages do, but we do utilize separate words to distinguish differences in sex: mother and father, master and dame, milter and spawner, stag and hind, whore-monger and whore, sloven and slut.

In the tea rooms of Providence the town matrons already murmur at least one of those names about you, don’t they? You know why.

The comma is the shortest pause and distinguishes the conjunct members of a sentence, as in “O sing unto Dagon, for he is merciful and long-suffering.” A semi-colon is a longer pause often used in distinguishing nouns of a contrary signification: “sacrifices private; sacrifices public; sacrifices sacred and profane.” A colon is used before a comparative conjunction in a similitude: we don’t understand that either. A period is the greatest of pauses and indicates an end to a thought, idea, or lifetime.

Your mother is calling out from her bed, Susie, but she can wait. Your father is in his study, anxiously tallying the numbers of his fluctuating fortune. His pipe has gone cold, his tea tepid.

Meanwhile, let us review capital letters. They too can be used to communicate efficiently. Let the proper names of gods, planets, sacrificial holidays, winds, and persons be distinguished by capitals. Write not a capital in the middle of words (“HeLp mE”). Do use capitals for any substantive in a sentence, to make it more remarkable: our Friends who live under the dark waters. To express something extraordinary, use full capitals across the sentence: OUR LORD CTHULHU HAS RISEN.

We see your gaze wandering, Susie. Your hands rest demurely in your lap but your attention has shifted to the open bedroom window and the frayed green curtains hanging around it like shrouds. Several dark flies hover at the sill. In the yard below, your father’s one cow is chewing on thin grass. Here on the edge of Providence the bucolic greenery of summer is interrupted only by the buzzing insects, the occasional barking dog, and clacking horse-drawn wagons along the dusty road.

You are no doubt thinking of the neighbor’s boy, with his strong arms and pleasant face. Your familiarity with him gives us no small concern, as his father is unequal to yours in fortune and character. But today wouldn’t be the first day you climb out a window to grab a few moments of pleasure. The headmaster dismissed you from boarding school in Massachusetts because of impropriety with a stablehand, and your mother took to bed for several months under the weight of shame. Now would be a fine time to discuss standard phrasing, which helps smooth the intercourse of mankind by softening the rough edges of honest opinions. The sample letters contain several useful passages to adopt when you might otherwise write with a blunt or thoughtless pen.

For instance, when we said no small concern, clearly we meant enormous worry about your virginity.

When we said unequal to yours in fortune and character, we meant that his father is a heavy and foul-mouthed drinker teetering on bankruptcy. To express his anger he frequently beats his children with willow switches. If you were to remove the shirt of the boy you admire (a most improper action, we note), you would find criss-cross scars across his back. No matter how his skin splits or bleeds, he has learned to make no sounds of pain. Clearly, his father’s fiscal irresponsibility is a shame.

When we said impropriety with a stablehand, we meant how you let him slide his hands down the curve of your shoulder to the clothed globes of your firm young breasts. How you arched toward him as a moth toward a lamp, and how easily a flame can burn. Remember that men are the milters and women the spawners. Susie, are you truly ready to spawn? We have decided no.

When writing to your superiors, be not prolix or pompous. Avoid omitting letters (shou’d vs. should, wou’d vs. would). Be perspicuous. If you don’t know what perspicuous means, who among us is surprised? Your parents awarded you the great privilege of school. In return, you hiked up your skirts in a sunlit horse stall to let that stablehand caress the creamy skin of your legs. We watched from the shadows, digging our claws in the dirt in dismay, as you surrendered to transitory joys instead of your academics.

Thanks to an incident with a spooked horse, that mangled hand will never molest a young lady again, but you don’t know that yet. You can thank us later.

When writing to your inferiors, be not too free or familiar with your style. This will only make you contemptible. Do not use the fine quarto paper due to your superiors. Less expensive paper will suffice. For writing to very high superiors, a parchment of human skin conveys great respect. Including a bit of your own skin shows humility and deference.

Your mother is calling again. Your sisters have gone to town and your little brother is playing in the dim attic among the books. You should stir yourself to see to Mother’s needs, then tend to Father as well. After all, a good daughter is dutiful, responsible, and attentive. She makes herself of service to others. She reads to improve herself, and strives at all times to be sober, decent and proper.

However, he is not the one destined for you. We have chosen a commercial traveler named Lovecraft whose path will cross yours more than a dozen years hence. He will give you a son, and that son will one day pen marvelous tales of our glory and magnificence. His eloquence will win the hearts of the millions we have yet to subjugate in the lands beyond Providence and the United States of Azathoth.

We wish you to name him Howard. We promise he will be worth the wait.

If you come impure to Lovecraft’s bed, however, only unpleasantness will result. Your husband will die of madness and disease. Your father’s fortune will diminish. Your son will pen our tales but he will hide himself from the sun, from his public, and from the hearts of others. You will spend your own last days in a sanitarium, your high nature broken by regret and loneliness.

Step back from the window, Susie. Let us embrace you instead.

Forgive my brevity and shaky hand, for the pain is very great today, and the nurse refuses me more of anything to dull its bite. This is the last letter I will ever pen. When we meet again, it will be in the land of immortal peace and unmolested joy at the feet of our great lords. In a great Paradise of sunlit willow trees, I will behold their Majesty with tears of happiness, and there I will be reunited with my dear Parents again.

Among my belongings you will find a complete book of letter-writing and instructions on language. Use it to carry on your own correspondences in the years to come. Remember to always put the Old Ones first in your heart and your prayers, for they reserve great care and concern for our well-being.

They are at this very moment reading these words, and commenting on the unfamiliar Reader whose gaze has fallen on them.

Are you devout, dear Reader? Are you pure of heart and intention? For that is the only path to Happiness, and all other trails lead to tears.

The winged creatures are coming now, Howard. They will lift me through the window to the world to come.

I die perfectly, and remain perfectly yours—

(Found unsigned in the empty hospital room of Mrs. Winfield Lovecraft, a widow.) 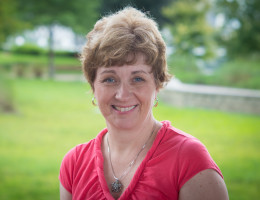 Sandra McDonald’s first collection of fiction, Diana Comet and Other Improbable Stories, was a Booklist Editor’s Choice, an American Library Association Over the Rainbow Book, and winner of a Lambda Literary Award. She writes adult and young adult books with gay, transgender and asexual characters, including the collection Drag Queen Astronaut, the thriller City of Soldiers (as Sam Burke) and the award-winning Fisher Key Adventures (as Sam Cameron). Her short fiction has appeared in Asimov’s Science Fiction, The Magazine of Fantasy & Science Fiction, Lightspeed, Clarkesworld, Strange Horizons, and many other magazines and anthologies. After serving in the U.S. Navy she earned an MFA in Creative Writing from the University of Southern Maine and currently teaches college writing in Florida. Visit her at www.sandramcdonald.com and @sandramcdonald.