Still Life with Vial of Blood

In 2006, I did an internship at the Museo Universitario Leopoldo Flores in Toluca, Mexico, my hometown. The museum itself was built on a hill, almost inserted in the rock that serves as canvas for some very interesting pieces of art. Our biggest mural—a behemoth of twenty-two thousand square meters—had to be seen from a window. It shaped my way of understanding art and artists.

A little over ten years later, I emigrated to California, where I witnessed fire season for the first time in my life. This story was written during one of those painful times for my community, as a way to turn the experience of watching the world in sepia and smoke into words and art.

Brief Notes on the Art of Juan Cavendra

There is something about Juan Cavendra’s art that makes me want to close my eyes. The same something that forces me to keep them open in order to grasp a slight portion of the vastness that is every single piece of his artistic production. A something I cannot label with a single word, and have not been able to name despite years of close study of Cavendra’s work.

If there is one thing I feel comfortable1 writing about these pieces, it is that they are of an utmost beauty. It is the kind of beauty that paralyzes2 and confronts the individual with thoughts of their own extinction. That beauty that is, at the same time, joy and agony. A kind of beauty that cannot be processed with a rational mind.

“I love gloomy days, but not gloomy fire days. The sky is made of smoke,” Cavendra wrote on the back of his hand the morning he started working on this painting. A wildfire had been burning for days, and several acres of forest near Cavendra’s home had disappeared. Despite authorities’ warnings, he refused to evacuate, and instead decided to stay and paint six large-scale canvases during his voluntary confinement among the flames.

This particular piece is not only prominent, it is loud in its play of light and darkness. Smoke and flames transform the black background into a sepia and ruby atmosphere, and then burst from the canvas. The fire dances and goes up; meanwhile, a single figure crawls from the center of the frame into the spectator’s point of view. The figure is so black, it almost shines3 like a dark, victorious sun.4

The seven prints that compose this piece may look like a single work copied several times. An untrained eye could irremediably fall for Cavendra’s trick of light and color.

What appears to be a bony human face5 stares deeply into the spectator’s eyes. Deep shadows overwhelm everything else in the frame. Even the eyes appear as if engulfed by darkness. But one must pay attention to what happens in those shadows, the subtle changes, the small figures, the shimmering eyes inside the eyes, the legion6 that lies in there.

These prints are, indeed, like raindrops. So similar and yet so different. A treat for the imagination.7

Much has been said about this piece that I have simply called “Still Life with Vial of Blood,” although it does not show such a vessel. It depicts, instead, a pile of human remains anatomically perfect and very much similar in proportion to Cavendra’s own body as it is shown in the series of self portrait photography Diary of My Scorched Life8.

The difficulty of conservation for the peculiar technique used in this piece of art has made it almost impossible to determine its size, which has varied from a dozen centimeters, to almost a meter wide.

It is a shame that Cavendra stopped working and disappeared from the art scene after producing this amazing piece of art, which is certainly his best—and hopefully not his last.9

4. Apart from Cavendra himself, only two people have been owners of this piece. Both died in fires. The first one was determined accidental; the other, arson.

In their suicide note, the second owner wrote: “This is the diary of my scorched life. From flames I come. In flames I go. Look at them dance.”

7. Several people have owned those prints, which have not been together as a whole piece of art since they were created by Cavendra.

8. A series of hundreds of photos show Cavendra tied, naked and covered in blood in a barely lit room. Tiny dark figures engulf the background, coming right towards the camera. He looks uncomfortable. He doesn’t dare to move.

He’s there. He’s that thing.

He’s coming, too, from the flames.

Look at him dance. 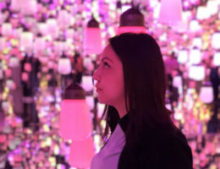 Nelly Geraldine García-Rosas is a Mexican immigrant and a graduate of the Clarion West class of 2019. Her short fiction has appeared in Clarkesworld, and anthologies like The Apex Book of World SF 3 and She Walks in Shadows. You can find her at nellygeraldine.com and on Twitter as @kitsune_ng.