My inspiration for this story combined two separate things: the idea of how terrifying it would be to experience a tornado warning without knowing what you were running from (shout-out to writer Sarah Hollowell!), and a keen interest in the staccato and visceral prose of writer Brian Evenson. These combined to create the story at hand. Written in a single evening, I wanted to see if I could wield language like a hammer and drive home in short, blunt sentences just how scary it would be to hear an alarm go off, not know what it was for, and realize too late no one told you. That it’s set at a school only makes the parallels scarier and more evident, given the horrifying norm most American students deal in with school shooter drills. Thank you so much for reading and I hope you find in it whatever you need.

The alarm goes off during math class. Its loud, clear bell chimes once, twice; by the third chime, the light from the windows is disappearing.

Most of us put down our pencils and stand, grabbing our backpacks before the fourth chime. Most of us know you don’t really get past six chimes before it arrives.

There’s a new kid over at the window who hasn’t moved fast enough, who’s making noise, gesturing to the dark, asking too many questions. His eyes are transfixed on the world beyond the window. We know he’s looking for where the dark came from so early in the day.

Too bad. He seemed nice; he wasn’t from around here.

But he was noisy.

His head drops forward, dead weight on a body that finds the mind suddenly gone.

Mr. Andrews is at the door ferrying us into the hallway when he notices new kid has gone limp. “Oh, dear,” he says, wincing as new kid’s body makes a sound; a long, hollow moan, finding itself empty.

We move out into the hall. Students from the other classrooms join us, clutching backpacks, checking phones, texting parents.

No one says a word.

That was the first rule drilled into our heads when this started happening, when we practiced on clear-sky days: no sound. Checking your phones was fine, writing notes to each other, reading a book. That’s all okay.

Mr. Andrews checks in with each of us, puts a hand on our shoulders, there and gone. He converses in low murmurs with other teachers. Points back to his door. The faint whisper of, “I feel so bad . . .” before the other teachers nod in sympathy. At some point in the last four years, they lost one, too. Maybe more.

New kid is still moaning. We hear him drift through the classroom, senseless. Bumping into walls, desks. Knocking things over, limbs dead, listless.

That’s what they all do. When the mind goes, the body doesn’t know what to do. Whatever takes them has no use for it, but it’s also not very considerate. No gentle note to the heart to stop beating. No kind word to the brain to stop firing. The driver of the car gets plucked away from the wheel. The car keeps going.

We text each other about new kid.

Maybe they can get him back. They got Susan back last year.

Susan looks at the sun without blinking. Ain’t worth it to come back.

Better than being gone. Has to be better than where the dark takes you. Right???

At that, the silence we’re sitting in thickens, becomes murky. We watch through the vertical glass pane of the door as new kid approaches the blackboard, little wisps of pale, grey smoke leaking from the corner of his blank eyes.

It has to be better.

One of us texts it, and we all hope it’s true.

The dark doesn’t usually last more than twenty minutes. We may even have time to get back to math class. Today was all about imaginary numbers. Complexity expressed simply, mysteriously.

Maybe that’s what the dark is, we wonder. Maybe whatever it is, it’s too big for the mind to handle. So, the mind goes somewhere else for a while. Maybe the mind will come back when it knows better, and can handle it.

New kid’s body slams into the door. Head cracks against the glass, hard, louder than a gunshot.

We hold our breath. The hall goes still.

Every window darkens, the deep indigo of the dark outside the windows becoming as all-consuming as a winter night.

New kid walks into the door again, head hits glass again. A moan throttles out of him, like something is shaking him between its jaws. There is smoke behind his teeth. From here we can all see him crying. The tears are normal. Human.

We hold our breath. Please, please, we think. New kid, please shut the fuck up. Please.

A new sound joins his moaning. The glass panes of the windows rattle, vibrating up and down the hall in unison. He’s being too loud, too loud!

We’re panicking. The dark has never done this.

He’s at a loss, but not Ms. Stabler. She’s always been a decision-maker.

She glides forward, heels not making a sound. She grabs the knob, twists it. Too fast, she swings the door open, face placid.

The sharp edge of the door hits new kid in the face. There is a broken sound, a spurt of blood. He crumples to the ground, goes silent.

Ms. Stabler closes the door with a whisper of displaced air and nothing more.

A feeble moan escapes new kid, but it’s soft enough that whatever’s outside can’t hear. The rattling of the windows stops. The night backs away. Soon, even the dark disappears.

Sunlight returns. But we wait. It’s been known to come back.

A soft chime chirps through the air. All-clear.

We all have to wait a little longer than the other classes. Some agents are called from the local 001. They shepherd new kid down to a black, unmarked van.

He’s stopped crying. His eyes are fixed on the sun, the sky, somewhere out there that we can’t see but he can.

Mr. Andrews leads us through mandatory catharsis. Some of us talk about feelings. Most of us don’t. Not worth it. It might just happen again next week.

Well. Back to it, gang, he says, writing on the chalkboard, hands trembling.

It could stand for anything, he says.

We watch new kid’s blood drip down the door’s edge, a little bit of darkness, hard to miss in the afternoon sun. 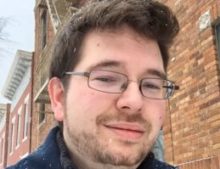 Martin Cahill is a science fiction and fantasy writer living in NYC and works as the marketing and publicity manager for Erewhon Books. He’s a graduate of the Clarion Workshop of 2014 and a member of the NYC-based writing group Altered Fluid. You can find his fiction in Lightspeed Magazine, Fireside Magazine, Beneath Ceaseless Skies and other places. His short story “Godmeat” appeared in The Best American Science Fiction and Fantasy 2019, and he is part of the writing team for Batman: The Blind Cut, out now from Realm. Martin also writes, and has written, book reviews and essays for Tor.com, Book Riot, Strange Horizons, and the Barnes and Noble Science Fiction & Fantasy Blog. You can find him online at @mcflycahill90.