I’ve always thought that the illicit hunting of baby seals was a cruel and horrifying thing. Putting myself in their position, being out on the ice, vulnerable to humans, their weapons, and their ill intents made me think of this scenario. The story: What would happen if humans were to experience a similar fate?

The morning was cold and overcast, and the few slivers of sunlight that caught on Marlon’s body did nothing to warm him in the slightest. He cursed under his balaclava and tried to listen for the sounds of helicopters and schooners over the groan of ice scraping alongside the boat.

They had been far out at sea; farther even than most fishing vessels had typically ventured this time of the season. He doubted anyone had followed them to this empty stretch of coastline; there was nothing out here but pain and emptiness.

Uncle Harrold jumped onto the ice first, wasting no time. When Marlon was certain everything was clear, he cocked his rifle and vaulted over the side of the boat after him.

As he landed, the ice beneath his boots cracked. “Fuck,” he whispered. He took a gentle step forward, using the rifle to steady himself like a tightrope walker. The ice shelf had appeared solid from out at sea, but now he wasn’t so sure it would hold long beneath his girthy frame.

“Hey, Biggie,” Uncle Harrold said, turning back at him. “Get your fat butt over here, kid. I count five seals. If we can corral them into a tight killzone, it’ll make our jobs easier.”

Marlon nodded and trudged ahead as a fierce gust blew in. The cold began to cut into his hands like a thousand razors. Forgetting his gloves at the docks had been stupid, even for him. He wiggled his fingers to keep the blood pumping, hoping he could still pull off a decent shot when the time came. The last thing he wanted was to screw this up. Hell, he couldn’t afford to at this point. He shrugged off the thought and tried to focus. If his uncle was to be believed, he was five well-placed shots away from paying off his bookies.

Apparently, there was a healthy illicit market for seal skins, meat, and blubber outside the watchful jurisdiction of the Canadian government. Sketchy buyers whose identities were best left anonymous. “Put it like this,” his uncle had told him, “if it exists, there’s a market for it.” Uncle Harrold knew all about stuff like that. He got to know some big players during his stint in prison.

Marlon spotted a pair of plump, spotted seal cubs meandering across the ice. Siblings perhaps. Their eyes glimmered like fresh snowpack in the distance as they bellyflopped playfully over one another on the edge of the shelf. He felt a tug at his heart. He wasn’t the kind to do this under ordinary circumstances, but he was in a predicament. A life-and-death sort of bind.

A few bad hands at poker could doom a man in extremely horrific ways.

Uncle Harrold brandished what resembled a pickaxe and brought it close to his chest. Only it was different. The club had a small, blunt hammer head on one end, and a long, curving hook on the other.

“What is that thing?” Marlon said raising his voice over the wind’s roar.

His uncle stroked his grey beard, keeping his eyes fixed on a solitary seal that had strayed from the pack. “A Hakapik,” he shouted back. “After you shoot the things in the head, I’ll come in close and smash their skulls with one end, and hook their bodies onto the boat with the other. You can guess which side does what.”

Marlon felt his insides churn. He was glad he was only going to be doing the shooting. A single well-placed shot meant a quick death. Hell, he wouldn’t even be doing the skinning. Still, he couldn’t help but feel dirty inside. He tried to change the subject. “What are you gonna do with your share of the money, Uncle Harrold?”

His uncle smiled. “Well, Biggie, I wasn’t gonna tell you until later, but I was planning on giving you my cut. I figured you won’t have much left after you pay off your debts, and you’ll need something to get you back on your feet. I mean, what’s family for, am I right?”

Before Marlon could respond, a loud crack filled the air. Uncle Harrold’s head exploded in a burst of hair, flesh, and red chunks before his body toppled to the ground. Another explosion. Something struck Marlon’s jaw. He fell beside his uncle’s corpse where his blood had canvased the ice like a bucket of spilled paint.

Marlon’s face flared with pain as he reached for his rifle. Then came another crack, and his right hand blew apart in a burst of bloody fragments.

He howled while his wounds throbbed to the beat of his racing heart. Then came darkness; a few moments in and out of consciousness elapsed before he heard the sound of crunching beside him.

“These two will do,” said a gruff voice. “Lots of skin between the both of them. Probably family.”

“Mm,” said another. “Plenty of nourishment and warmth to be had. The buyers will be pleased.”

Marlon managed to turn his head slightly. A Hakapik came down on Uncle Harrold’s spine, the hook lodging itself deep into his tissue. Streaks of crimson trailed his body as it was dragged across the ice.

In his peripheral he spotted the twin seal pups slithering off the shelf and into the sea. He thought about crawling for the edge. It couldn’t have been more than ten meters away. Through the pain, Marlon inhaled a deep breath, and with his remaining hand, dug his fingers into a crack in the ice shelf and tried to pull himself forward.

As he crawled, his head scraped along the jagged floor, the impact dislodging a few teeth from the cavity in his face.

The crunching of ice reared up in the distance again.

He lay still, crying. Warm tears streamed down his face, burning as they entered his wounds.

“That one’s lost a hand,” called out the gruff voice.

“Should still fetch a fair price,” the gruff voice added. “Lots to work with. Lots of skin.”

The cold began to numb Marlon’s body as he lay beside a pool of expanding blood. Before he blacked out, he heard the crunching of ice stop behind him. It was then that he was glad he wouldn’t feel much before the end. At least that’s what he’d hoped. 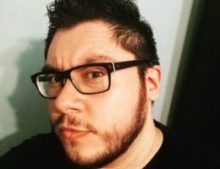 Pedro Iniguez is a speculative fiction writer who also enjoys reading and painting. His work can be found in magazines and anthologies such as Space and Time Magazine, Crossed Genres, Dig Two Graves, Tiny Nightmares, Deserts of Fire, and Altered States II. His cyberpunk novel, Control Theory (Indie Authors Press, 2016) and his 10-year collection, Synthetic Dawns & Crimson Dusks, (Indie Authors Press, 2020) are available online. Originally from Los Angeles, he now resides in Sioux Falls, South Dakota, where he is currently working on his second novel. He can be found online at Pedroiniguezauthor.com.