When I was a kid, I had horrible allergies (still do, actually) but I also caught a couple of skin infections that I won’t detail. This happened right around the time we moved to a new city where suddenly my “Asianness” also became front and center. With all this hitting a kid roughly at the same time, it wasn’t hard to feel absolutely helpless and alien.

When I was a boy, my left hand grew a cluster of tiny eyes on my pointer finger, right between the first and second knuckle, on the side facing my thumb, so I could always see them looking around, searching for something.

My father dragged me to the doctor, less worried and more furious: I have always had health problems. Our doctor had the same frustrations; none of my problems ever had solutions. He didn’t want to suggest surgery. I wasn’t in any pain, and he wanted to wait and observe. “Maybe it will go away on its own.”

On the drive home, my father remained furious. “It’s because you’re filthy, playing in the dirt with those friends of yours.”

“I’m supposed to play in dirt. It builds up immunity.”

“Where did you hear that?”

Children hear things, but they don’t generally cite sources, and thus have no standing in any debate. At the end of the drive, he told me that my allergies, eczema, and eyes growing out of my hand were due to poor character, lack of willpower. I just wasn’t tough enough.

My friends recoiled. Some vomited or fake vomited, which was worse. A few pointed out the eyes were blue, green, hazel. None of them had my deep, dark brown. None had that fold.

“You said it yourself,” one of them said, “a ‘banana,’ yellow on the outside, but white on the inside, except now it’s coming out.”

I tried to argue, but they pointed out the music I liked. The shows I watched. My Halloween costumes.

Maybe they were right?

How could I answer that? It happened to me, so logically it could happen to someone else, someone with my skin color, my hair, my eyes. The question felt wrong, but the proof was on my hand. I was wrong.

At school at least, I could get distracted by the teasing; teachers, lesson plans, reading. At home, sitting in my room alone, I couldn’t help but stare at the eyes. They’d look around, blinking, pupils dilating in the dark, darting back and forth from my face to whatever else was in the room. There were so many eyes that I couldn’t bend that finger. If I bent it too much, the eyes bulged out, as if they might pop.

Mowing the lawn (we only had a push mower), I had to favor my right hand. The eyes on my face watered and burned from my allergies. So the eyes on my hand also teared up, making my left hand slick. Of course, a blister formed on my right palm and I had to stop and go inside.

My father frowned, but took out a needle and some rubbing alcohol. He sterilized the needle and then poked the blister without warning me. With a tissue, he squeezed out the fluid. I was surprised it didn’t hurt. He glared at the eyes on my hand and left me to put away the needles, alcohol, and tissues.

Instead, I brought them all to my room. That night, when everyone was asleep, I held the needle in my good hand, sharp and thick, almost a toothpick. It hovered above my finger, the eyes all staring at it. But I couldn’t. How deep would I have to stab? I shivered at the thought of blood and maybe striking bone. I put the needle down and the eyes blinked.

A glob of medicine sat on my finger and again, I hovered over the eyes. They all stared at the glob, pleading, shaking, weak, helpless.

For a second, I hated them so much, I smeared the glob all across my finger. They twitched and spasmed, tugging and pulling against my skin, but I felt no pain. The whites of the eyes turned red and veiny. They cried.

“Sorry, sorry!” I rushed to the bathroom to find eyedrops and squirted it onto the eyes. They blinked, closed, and never opened again.

The next morning, my finger was clear, skin smooth, but I felt the eyes inside my hand, the meaty part between my thumb and pointer finger. I felt them blink and shift, looking about inside, pressing against skin, muscle, and bone. At least, no one had to look at me in disgust now. My father shook his head because the hidden eyes didn’t change my other problems.

My friends still talked about me behind my back. They didn’t care that I heard. I stopped hanging out with them. The rumors didn’t stop, but this way, I didn’t have to endure their stares.

Nowadays, the eyes tend to erupt from my skin when I’m stressed or anxious. They come out everywhere now. Usually my hands, but sometimes my back or my face, sometimes small, sometimes as large as my own eyes. I’ve learned to live with them. I just call in sick and disappear, tell people I’m contagious with a cold. Something mundane to keep people away.

My father still thinks my getting “sick” all the time is due to weakness, but I’ve never felt better. In fact, sometimes I talk to my eyes. They don’t judge me. They don’t tell me how wrong I am. They can’t hear me, but they see me. 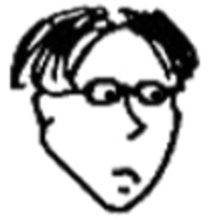 While being rained on adjacent to Portland, Oregon, Monte Lin writes, edits, and plays tabletop roleplaying games. Clarion West got him to write about dying universes, dreaming mountains, and singularities made of anxieties. He can be found tweeting Doctor Who news, Asian-American diaspora discourse, and his board game losses at @Monte_Lin.