When the woman flips the visor down, a weak glow flickers on around the mirror. She reaches above her head for the dome light.

“Turn it off,” the driver tells her.

“I have to check my makeup.”

“Off.” He squints at the road and the taillights smearing past like wet blood cells in the fog. “Can’t see where I’m going with that thing on.”

The driver lifts one fist from the steering wheel and finds the switch in the headliner. Behind him, tiny electronic voices chirp in the dark. Now a small human voice begins to sing along with them.

“What’s going on back there?”

“Don’t upset the girls. Not tonight.”

“Who’s upset?” The back seat is blurry, as if the fog has crept into the car. He wipes mist off the rearview mirror with his thumb. “Are you upset, Angela?”

“No, Daddy.” A young girl’s face shines in the dim light from a video game. Her hair is tied back tightly in the manner of a preteen ready for ballet class, and reflections of pink-and-blue fairies dance across her cheeks. “Um, can I ask a question?”

“Of course you may,” says the woman.

“How far is Princess Land?”

“Not far,” the driver mutters. “Soon as I find the street. What’s it called now?”

“I’ll be late for the contest!”

“How many more miles?”

The younger girl’s eyes open wide, as if she has been slapped.

The man grips the wheel and bears down. “What’s she doing reading in the dark? She’ll ruin her eyes.”

“What kind of picture?” says the woman.

Tracy holds up her composition book. All that shows is a hazy scrimshaw of lines in the middle of the page.

“He’s the only thing I like to draw now. I think he’s so beautiful.”

“Where do you think that’ll get you?”

“She’ll be on drugs before she’s out of high school. You’ll see.”

The woman takes a deep breath. “Take the next left, and then the first right.”

He rubs out a spot on the windshield and hunches forward.

“Why don’t you turn on the defroster?”

He grunts and jabs a button. “It doesn’t work.”

“Don’t start with that.”

In the back, the girls turn away from each other and rest their foreheads against the side windows, breathing on the glass. Angie’s lips are a thin, tense line. Tracy lifts one finger and traces a long-nosed face with two drooping dots for eyes. Then she opens her window a few inches. A breeze ruffles her eyelashes and the air begins to clear.

Colorful lights line both sides of the repaved street, like a landing strip for tourists. Most of the storefronts have been freshly painted, and banners depicting cartoon kings and queens are strung between lampposts, pointing the way to a pink turret that pierces the fog a mile ahead.

The driver squints. “What did they do, tear down Main Street?”

“Isn’t it wonderful?” says the woman. “Once the park opens, Santa Mara will be rich.”

“Where’s the tackle shop? And Moony Cobb’s Outback Diner? Remember when we used to go there?”

“All I remember is a lot of orange groves.”

At the end of the first block, a few aging stores remain in a strip mall that has yet to be made over: a mini-mart, a nail salon, a thrift shop, an antique dealer and a fortune teller’s parlor with a burned-out neon sign.

“Pull in there, Walter.”

He looks at her. “You’re kidding.”

“There are plenty of spaces.”

“Don’t tell me she’s still here,” he says in a low voice. The woman does not answer.

“Why are we stopping? I want to go to Princess Land!”

“Soon, honey,” the woman tells Angie. “First, I have a surprise for you.”

“You want to be chosen, don’t you? Well, guess what Aunt Masha found? A tiara, from the old country. And a necklace, and a beautiful gold belt. Everything a Princess needs. Tracy, come with us. I’ll bet she has something for you, too.”

He blinks at the soft horizon behind the mall, where a new Holiday Inn towers against the sky. Below the top floor fuzzy red letters spell out the words EXTENDED STAY. He lowers his head.

The woman and the little girl cross the strip mall, Angie scampering ahead, happy as a sprite. The fortune teller’s is closed and the antique store next to it is a jumble of dark shapes behind dirty glass. BRING THE MAGIC HOME, reads a tattered sign.

“Where are you going?”

“Here.” He reaches into his pocket and holds out a five. “You know, you could have at least tried.”

“What does that mean?”

“Look at you. What are you wearing? I’m sure your sister appreciates that. If you were nicer to her, maybe—”

“Maybe what? You wouldn’t all hate me?”

“She’s not even my sister!”

He turns in the seat to see her: the shapeless sweatshirt, the flat grey eyes, the short, boyish haircut. “Why did you say that?”

“I asked you a question.” When he places a hand on her arm his touch is almost gentle. “What do you remember?”

“I don’t remember anything, all right?”

“Listen.” He lowers his voice, as if afraid someone else might hear. “It’s nothing personal. But we all have our place in the world. Someplace where we belong. We have to find it. Otherwise, it just doesn’t work out. Can you understand that?”

He watches her leave the car, his face striped with pink and blue lights from the shops across the street. One will sell posters and framed lithographs of a fantasy land where elves live in snow-covered cottages. Another window is full of T-shirts and souvenirs and plastic jewelry with the Princess Land logo. His eyes glisten in the reflection.

When Tracy comes out of the mini-mart, the woman is carrying a cardboard box from the antique store. Angela pauses to do a cartwheel on the blacktop, her pink tutu fanning out like an Elizabethan collar around her waist. She spots Tracy and skips over.

“You have to be a Pixie first.”

“Is it what you really want?”

“Heck, yeah. Can I have some of your Monster Gulp?”

Tracy hands her the soda. “A lot of other girls will be there. Trying out.”

“So?” The younger girl slurps the straw down to crushed ice. “Now I’ll win for sure.”

Angie considers. “Then I’ll be in the show. And get lots of money. That’s what Mom says.”

“They’ll get it all.” Tracy nods at the woman loading the box into the car. “And you’ll be on your own.”

“When I get on the stage, you have to clap real loud and yell. Don’t forget.”

The older girl takes a few steps to catch up, then stops behind Angie and drapes her arms down over her shoulders.

Angie pulls away. “What are you doing?”

“I have to ask you something.”

“Could you take care of Mr. Muggles, all by yourself? Even if I’m not around?”

“Where are you going?”

“I don’t know yet. I haven’t planned it out. But this is very, very important. You have to walk him around the block in the morning, and after school, and twice at night. And let him sleep on your bed. Can you do that?”

“In the spring, probably.”

Angela’s smooth face tilts. “Are you running away from home?”

Tracy squats on the toes of her tennis shoes until her old jeans go tight at the knees, then leans in so that her head touches the other girl’s. She holds the sides of Angela’s face to keep her from turning away.

“Now don’t you dare cry. Your eyes will be all red. And don’t tell anybody. Do you hear? Or they’ll take Mr. Muggles to the pound.”

“Will you be there?”

“Don’t worry about it. You’ll be great.”

Tracy lets go of her as the woman walks over.

“Front seat,” she tells Angie. “You ride with Daddy.”

She turns to Tracy. “Come with me.”

Tracy gazes at the storefront. There is the outline of a heavy woman with black hair in the doorway.

“Just for a minute. She has something for you.”

“I don’t need anything.”

“She found a sketchbook and a set of oil pastels. All for you. Wasn’t that nice of her?”

“Then come along. Get rid of that cup. No food or drink inside.” She takes Tracy’s arm. “And stand up straight.”

Even in flat shoes the woman is taller. Almost sadly she shakes her head as she leads Tracy away.

Angie settles into the front seat.

She wriggles around, reaching for the cardboard box.

“Leave it,” the man says tightly.

Angie takes out her video game. “Can I play Nintendo?”

“When are we going?”

“When they get here.”

Angie presses her face to the window. A dark figure stands between the stores, watching as two people leave. They move slowly out of the shadows, the woman supporting the one next to her, who is having trouble in high heels. Without the woman’s help she would barely be able to stand.

The man does not look over his shoulder. “Put on your seatbelt.”

“Did Tracy get a makeover?”

Now bare ankles show above the shoes, and the hem of a pretty pink dress. It is a perfect fit for the tall, narrow-waisted body. The woman removes the shoes for her, then stands on tiptoes and reaches up to adjust the shawl over the girl’s head before they get to the car.

The back door opens.

The woman shoves the box aside and presses the girl’s head down so that she does not bump it when they slide in.

The man starts the car.

In the back seat, the well-dressed girl moans as if half-asleep or drugged. When the car rolls forward her head lolls sideways and long, shiny hair falls across her face. Before it is completely covered her eyes open halfway, glinting in the light from the dashboard. They are dull green slits.

The woman opens the box and holds a jeweled crown over the other girl’s head. “She’ll be the most perfect Princess anyone could imagine. Just like you, Angela. I’m sure of it.” As the eyes close again, she passes the tiara to the front seat. “Go ahead. You may try it on.”

The man reaches over and jerks the passenger seatbelt so tight that Angie can hardly breathe, while the woman fumbles in her purse.

“Here. Try a touch of my lipstick, this once. You’re going to be such a pretty Pixie, darling.”

“Oh, you’ll forget all about her. She was never really one of us. Was she, Walter?” the woman says angrily. “Was she? Was she!”

The man does not say another word as he drives on to the castle. 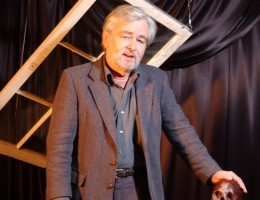 Dennis Etchison is a three-time winner of both the British Fantasy and World Fantasy Awards. His short story collections are The Dark Country, Red Dreams, The Blood Kiss, The Death Artist, Talking in the Dark, Fine Cuts, Got To Kill Them All & Other Stories and A Little Black Book of Horror Tales. He is also the author of the novels Darkside, Shadowman, California Gothic, Double Edge, The Fog, Halloween II, Halloween III and Videodrome, and editor of the anthologies Cutting Edge, Masters of Darkness I-III, MetaHorror, The Museum of Horrors, and (with Ramsey Campbell and Jack Dann) Gathering the Bones. He has written extensively for film, television and radio, including more than 150 scripts for The Twilight Zone Radio Dramas. He served as President of the Horror Writers Association (HWA) from 1992 to 1994. His latest books are It Only Comes Out At Night & Other Stories, a massive career retrospective from Centipede Press, and an expanded edition of Fine Cuts, a collection of Hollywood noir stories now available in its first U.S. publication from Borderlands Press. His e-books are available from David Niall Wilson’s Crossroad Press.