Ode to My Brother’s Sadness

The first draft of this poem was written in a haze of grief not long after my brother took his life in 2010. The only thing I could do to keep functioning at the time was take refuge in writing, and so I scribbled these verses down without thought to form. For reasons I’ll never fully understand, the music of R.E.M. was, and still is, a balm for my soul—something soothing about the bright tones that also carry undercurrents of sadness and dissatisfaction—and references to R.E.M. lyrics found their way into this piece as well.

he knew the elbowrooms and secret
rambling mind of bees about distance
and no one had time
for his blanched and careless words
about things he’d do someday
R.E.M. professed
to know him better than he knew himself
like the time in the backseat of a car behind a vacant
house he tore his shirt as she fucked him drunk
the speaker crooning
I need this 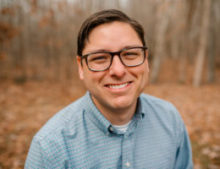 Franklin Ard is a graduate of Clarion West Writers Workshop and holds an MFA from Stonecoast at the University of Southern Maine. He is currently lead editor at Headless Hydra Press, a publisher of tabletop role-playing game supplements, and formerly served as editor-in-chief of Oracle Fine Arts Review and managing editor of Stonecoast Review. For over a decade, he has taught college-level writing in a variety of contexts, from beginner composition to doctoral dissertation writing, and he oversees the University of South Alabama’s Center for Academic Excellence. He and his wife, Stephanie, live in Mobile, Alabama, where they enjoy the humid frog weather. Find him online at www.franklinard.com and facebook.com/franklinardwriter.