Now Will You Listen

Growing up in Nigeria, I heard a lot of superstitious stories—from the rumors that the highest floor of our primary school building was cursed, to the tales that the mythical Lady Koi Koi was stalking some parts of our secondary school during the Inter-House Sports week. This story is inspired by the complex feelings of both wanting to see the supernatural yet feeling cautious about the stories you were told.

Twice, I have been instructed, by my mother and the state, to stay away from the boys who read. They stay on the far edge of town, isolated from everyone else, lost in the pages of their books. Once, I did manage to see one of the boys in a local corner store, face buried in another big book as his hand trailed the milk aisle. He had hair turning to dreads and a big forehead, but when I tried to talk to him, my mother pulled me away. On the ride home, she gave me my first instruction not to talk to those nothing but trouble boys, not to look them in the eye. Don’t start what you can’t stop. She thought she was talking sense, and she sure hoped I was listening when she said a word was enough for the wise.

I was not. I was angry instead, folding my arms and watching the trees from the windows instead of listening to her warnings. But here’s the thing at the end of the day: I’ve never been wise. And honestly, I don’t really ever plan to be.

The state has declared that all youth must have jobs this summer, which isn’t really good news for those of us who are idle. Maybe it’s because last summer, one of those gated community boys set fire to some people’s lands, but the state doesn’t want us out and about, shuffling from schools and universities, wrecking havoc to the town.

At first, I planned to get a job at the small laundromat to see those reading boys up close. They always used to gather there last summer, for some reason, eyes plastered to their books as they sat in awkward silence. But the small laundromat, I found out, had long been closed down, and since then, the little building was basically a glorified thrift shop. So I went and got myself a job at the corner store, the next best option.

I’m only in the 9-5 business so I can see the boys. Twice—morning time and before my shift ends—I take a walk ’round the block to see if the dreads boy might be living close. It’s just so fascinating to me, to be told I can’t do something. I love a risk.

Everyone in this dead town is as close to each other as hair clustered together, and just as much in everybody’s business. My aunties that are not my aunties are my blood. They’ll tell my mother if they ever see me going some place in uni that’s not class, and my mother would slap me if she knew I didn’t listen to their instructions. It’s just so frustrating sometimes, being pulled away from adventure after adventure, that sometimes I just wanna leave. Leave this place. Leave my aunties. Leave my mother and her nagging. What good did listening ever do anyone if it was only veiled by fear, and what exactly am I supposed to be afraid of?

“Your shift is finishing,” the manager comes to tell me. I’m about to get my things and go home when the dread-headed boy starts walking up the block. Sure enough, book in hand. I’m definitely not losing this opportunity.

“I’ll take your shift,” I say, and the manager takes the blessing I just gave him. He runs off without another word. A smart man.

“Lock up!” he shouts, throwing me the keys, entering his car and driving off. He shouldn’t be giving me this much responsibility as a new employee, but the manager’s never been one to think too much about the consequences of things. I like his style.

So it’s just me and the boy now, alone. He pays no attention to me, trailing his fingers, again, over the gallons of milk.

I bite my lip, shift my braids, then walk up to him.

“Need anything?” I ask. His eyes don’t even glance at me, as they’re too lost in the book. Just that forehead is all I see.

“No,” he says, walking past. I’m not usually one to push a conversation that doesn’t stick, but it’s also rare to get moments like this in town, when you’re alone with someone that you don’t know. When you’re experiencing an adventure.

“You’re always reading,” I say, but that doesn’t get him to open up. He grabs a cart though, going to the aisle where they sell pounded yam flour and beans, so I know he plans to stay longer than usual.

I keep following him where he goes, moving at his pace. That still doesn’t bother him. I block his path wherever he goes, but he just circles around. Nothing I do fazes him or snaps him out of his reading. But I can’t lose this opportunity. This one chance I have to do something that involves taking risks.

“Can I take a peek at your book?” I ask, finally, losing all my cool.

“That depends,” he says, giving the book to me. He presses it into my hands before I can stumble back, slamming me right into the weight of adventure. The book feels like fire on my chest, like a shackle against my leg, like temptation at my fingertips. “Are you willing to give up everything just to see?”

I don’t end up locking the store when my shift ends. Sue me, but I’ve got a lot on my mind. I don’t have a car, but I’m too flustered to be around anyone in a vehicle, too shaken, so I just walk home. As I walk, I listen to the sound of the trees and the birds, and the words of my mother in the past. I’ve never been wise at the end of the day, but I sure as fire know I’m not ready to give everything up. I love adventure, and the risk, but let me have a few more minutes with my mother and the nosy aunts and this town. The book burns with fire and furious temptation in my bag. But not yet. Not yet. I’ll see in my own time. 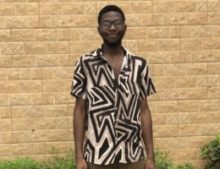 Osahon Ize-Iyamu is a Nigerian writer of speculative fiction. He is a graduate of the Alpha Writers Workshop and has had stories published (or forthcoming) from magazines such as Clarkesworld, Strange Horizons, and The Dark. You can find him ranting on Twitter @osahon4545.