As a fan of true crime, I’ve thought a lot about how death is consumed, the dead often reduced to props in their own story. I wrote “In the Water” to explore that same loss from the perspective of the victim, returning some autonomy while maintaining the truth of death’s passive nature.

They dump her body high in the Wicklow Mountains. The river takes her downstream, pushes her under, floats her back to the surface. Her greying skin shines like crystals in the midday sun. Her hair spans out around her head in a wispy fan, tangling with branches and leaves caught in the current. They become a part of her, knotted into the mass of light brown her mother used to braid when her hands were too small to do it herself.

Her mother will be missing her. Worried, a sickness deep in her stomach. The missing person report won’t be taken seriously by anyone but her. She was a teen girl last seen with a handsome boy. Kids run away together all the time.

“Maybe,” they’ll say, “she just wanted to get away from you. What was your relationship like, Mrs Rice? Was Dani a good girl?”

Her mother won’t know how to answer. She was good sometimes, others not. She was seventeen. They’re all like that; a light flicking on and off, fast until the bulb blows.

The water hasn’t filled her yet. She’s still mostly air; the strange mix of gases and goos we call human. It’ll slip inside soon enough, river water flowing into her ears, down her Eustachian tubes and into the hidden nooks and crannies of her face. The river will give her new life. It will fill her, asking her to be whole again.

For now, she floats aimlessly through the mountains, a lane of wet silver bringing her around the bend, past scout troops and couples who fancy the quiet. They don’t see her; don’t smell the death she’s carrying. They don’t know there is someone out there missing her. Or about the boys with blood on their hands.

Dani can still remember—not everything, but some things. Little snippets of what life used to mean. The warmth of it. How it sounded. She can remember the cold smell of the shed at the back of her nana’s house, of oil and rust lingering.

She doesn’t remember how she got here; how come her memories are few and far between. She doesn’t recognise the feel of the water. Doesn’t know where in the world she is.

She learns the new feel of her skin, bloated and blue beneath the water. She learns how the fish sound when they speak to her, asking for bites, pieces of flesh she no longer needs. She gives each who asks all they want. It’s easy now, her grip on the world so light it’s barely there.

She is alive again, in a way. An almost-there ghost life. The river’s water fills her in new ways, shifts her death into something else. It didn’t save her—nothing could. But it gave her something that’s good enough.

The water takes her slowly down the mountainside, deviating and doubling back at the will of the fallen trees that block its path. For once, life is unhurried. She spares no thoughts or concerns for the world she left. She knows only the blinking of the sky above, the rush of the water in her ears.

One day, she learns the sound of people again, laughing close by. They wouldn’t be laughing if they saw her. No longer a sight for sore eyes, she is the stain on their tranquillity.

By the time the river slows to an almost stagnation, a strange crab-like creature makes a home of her mouth; its tail wedged at the back of her throat, pincers bracing between her teeth. It speaks to her in whispers, delicate sounds that are not whole words, not spoken in any language she understands. It is a beautiful sound, one that lulls her to sleep on starry nights when the day’s sun has been cruel to what remains of her flesh.

In what she thinks are dreams, she remembers a woman’s beautiful aging face, her smile like comfort. She dreams of arms wrapped around her middle, the smell of cotton fresh deodorant. When she wakes—she thinks it’s waking—she can’t recall the smell, she only remembers how it felt inside her; a strange belonging she wished to escape.

She reaches a patch of rapids that take her for a ride, tossing her body around with such joy she can hardly tell what is sky and what is water. When the river levels out, water deep and green beneath her, she looks up through the surface, through the dazzle of the sun, and sees people.

Their faces are put together in ways that seem odd to her now. She is used to what lives in the water. The fish and eels and strange spindle-legged things that dance from edge to edge. She does her best to catch their eye, hoping the river moves her into their line of sight, hopes an overhanging branch will tug what remains of her clothes, raising her arm out of the water in a wave.

The first group don’t see her. She drifts by on her way. She wonders what they are doing so far out in the wild. She hopes they know it well enough to leave when it is time.

She misses them when she passes, the night falling around her like a smear of coal dust. When it clears, she hears more of them; young voices full of wonder and awe.

They scream when they see her, sound rising high above the trees. She doesn’t need to remember what it means to know she isn’t welcome. They run from her, arms waving wildly, calling for help. If help comes, she never meets it. The river continues its ancient twist through the trees. She moves on to the next thing, the sky always the same above her, blinking back.

In her might-be-dreams, she sees horror in flashes. She learns these are memories, locked in the knit of her skin. The trauma of her death holds her cells hostage, begging some truth of it to remain for someone to find.

For someone to know what happened to the girl she was before the river. The person before the body and the life before the loss.

When they find her, they think she’s fake. A CPR dummy aged by the sun or a Halloween decoration far from home. They poke her with a stick, sharp tip piercing her skin as easy as boiled meat. When they realise she’s as real as they are, they stumble away. Screaming, they leave her alone again.

Death has made her a monster to them. There is no place for her now but the water. She is safe in its flowing care, a friend amongst the jumping salmon and silent, lurking eels. They do not fear her. Do not run from what she tries to give them. They accept her as she has become.

There are worse ways to be than new, she thinks. Worse things to be than a vulnerable thing, now feared.

There is safety in it—in the screaming that’s no longer hers. 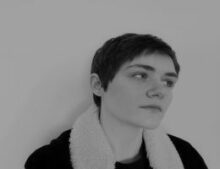 Born and raised along the Irish coast, Rowan Wren is no stranger to salt-whipped villages and the strange stories they hold, making her interest in speculative fiction inevitable. Her work has appeared in or is forthcoming from The Magazine of Fantasy and Science Fiction as well as several anthologies. When she isn’t writing she enjoys listening to records, watching documentaries, and searching for the perfect brown jacket. Online you can find her talking nonsense on Twitter @rowan_wren or deleting poetry on Instagram @rowanwren.