After half a barrel of foaming sour pulque, Ignacio and Hector start the long stumble home. The night is cold but they’re still warm, still cocooned, and they talk in circles about the business, the vermiculture that will turn Oaxaca’s gardens into jungles and fill their pockets besides. Their families’ futures in a tub of worms. If the shadows on the street are deeper than usual, if the barking of the dogs is more desperate, if the waning moon is unnaturally sharp, a shard of bone from a desecrated grave, they do not notice.

Not until they hear the baby crying. Hector hears it first—his ears are attuned from endless nights taking shifts with his wife Luisa to rock their foul-tempered little Soledad back to sleep. Ignacio and his wife are still childless. Hector thinks, blearily, that someone is outside walking with their baby, hoping the cool air and motion will put them to sleep.

But as the cobbled street slopes upward and they follow its curving spine, the noise grows louder. Ignacio’s eyes are keener than his brother’s. He sees the baby first, the tiny bundle lying in the middle of the road where any unwary taxi driver could run it over, where any hungry dog could strip its flesh. He sees no mother and he sees no lit windows.

They look at each other, then hurry forward. Ignacio is the one who scoops the baby into his arms, as he often does with his niece, and bounces it against his chest. The baby’s wailing stops abruptly.

But the street is silent. The shop shutters are metal teeth clenched shut, and there is no light or even blurry radio coming from the houses. The distant dogs have stopped howling. The air is cold and the sky is black and Hector feels as if they are alone at the bottom of a deep well, the slice of moon their only glimpse of daylight.

Ignacio sniffs. “Shine your phone,” he says. “You smell that?”

Hector thumbs the screen of his phone and casts a pale blue light over the wrapped baby. The cloths are stained dark. The smell of gasoline burns up the insides of Hector’s nose. And there’s something else, something that makes Ignacio stiffen and hiss. The baby has no eyes, only small crusty craters.

The sight of it pushes icy fingers against the back of Hector’s neck, and he knows this is why the desperate mother left her baby here in the street, because of this deformation. The baby’s head turns to him, and for a moment he wants his brother to fling it back down and leave it to the dogs, because even though the baby has no eyes, it is watching him.

“We’ll take it to my house,” Ignacio says. “And in the morning, to the hospital.”

“Of course,” Hector says, feeling foolish and guilty. “Of course. To your house, and then to the hospital.”

Ignacio tucks the baby up against his shoulder—it makes no sound—and they walk on. The slope steepens and the narrow streets wind in and out of each other like the guts of an animal.

Hector lights the way with his phone, soft blue screen bobbing through the darkness, and he listens to his brother’s breathing grow louder and louder. Oaxaca is cold once the sun drops, but when he turns around he sees Ignacio’s forehead is drenched in sweat.

“Heavy,” he grunts, sagging forward. “Soledad is so light. This one, he must be a boy.”

Hector realizes that Ignacio is drunker than he is, legs still jellied from the pulque, and that he fears tripping on the jagged cobblestones and dropping his bundle. So he holds out his arms. As he takes the baby, his skin turns to gooseflesh. It is heavier than Soledad—Ignacio was right about that—but Hector cradles it tight, penance for when he wanted it flung to the ground, and they continue on.

The streets are empty. Once a stray dog comes sniffing after them, then backs away, whining in its throat. Once they hear a distant firecracker from some party down the hill, but the sound is strangely muffled. Hector adjusts his grip on the baby over and over again. Ignacio rubs his hands furiously against the backs of his pants, trying to clean the dark fluid off them.

They reach Panorámica del Fortín and go left, towards Ignacio’s small house and bursting garden. Hector is stumping along slowly now, bent nearly double. His lungs are heaving. His legs ache. The baby is heavy as a corpse, but he can feel its heart thrumming through the cloths. He thinks he can hear bones stretching and knitting, fat burbling, flesh layering on flesh. But that is impossible.

His pulse pounds in his ears. He heaves the baby up onto his shoulder and keeps after his brother, dogged. Ignacio is walking with quick twitching steps, nervous even though they are on his very own street. Hector can smell his sweat, the stink of sour pulque and sour fear even though there is nothing to be afraid of.

The baby wriggles and nearly slips from his grasp. Its legs are dangling free now, not the chubby limbs of a baby but strangely skeletal.

The voice is not Ignacio’s; it is high and sickly sweet and comes from the bony body cradled in his arms. Hector stops in his tracks. He looks down into the dark craters where the baby’s eyes should be. He is dimly aware that Ignacio has stopped, too, that both of them are unable to move or even breathe. The baby’s black lips peel back.

And it does: an ancient animal’s teeth, jagged and rotting, too many for its tiny mouth. Hector comes unfrozen; he hurls the thing to the ground and then he and Ignacio are running, running like madmen, until they reach the gate to his house.

“Do you remember that night?” Ignacio asks.

Hector’s phone is on speaker, sitting on the concrete floor beside him while he works. He can hear the shift in his brother’s voice, even through the distortion, and he knows which night. The night they haven’t spoken about for months and months.

“I remember,” he says. He rakes his hand slowly through the loamy soil, thick and damp with compost. “Yes. I remember.”

“What did you do when you got home?” Ignacio asks. “That night.”

Hector shuts his eyes. “Soledad was asleep for once. And so was Luisa. But I couldn’t. I felt ill. I was shaking. So I went to the garden and I wrapped my arms around the lime tree. I wanted to smell it, I remember. I spent the whole night that way, and in the morning I felt better.” He pauses, opening his eyes. “But the tree died. You helped me tear it out the next week. Remember?”

“You never said it died that night.”

“Maybe it was a few days later.” Hector buries himself wrist-deep in the soil, imagining his arm is a growing tree. “Maybe it had nothing to do with it.” He pauses. “What did you do, Ignacio? That night?”

“I tried to wash,” Ignacio says. “Then I got into bed and tried to sleep. In the early morning, Valeria kissed me and told me I stank like alcohol. And we had sex.”

Hector watches the skin of his arm turn to gooseflesh again. “And? What else?”

“She’s pregnant,” Ignacio says. “It’s good. We’re happy. We’re very happy. I wanted to tell you earlier, but we waited to be sure.”

“Yes.” Ignacio’s voice is stretched taut as a piano wire. “It’s just that she’s having dreams. She’s having dreams where she gives birth to something that is not a baby, and the only thing she knows to do is douse it in gasoline and set it on fire.”

Hector remembers the pungent smell of the stained cloths, the sharp bony body underneath. “I’m sure everything will be fine,” he says.

They talk about the business then, while Hector scrabbles his hand beneath the cool soil. He feels the shape of a seed. When he pulls it out, it looks more like a tooth. 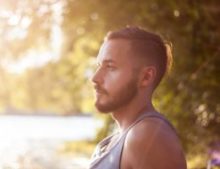 Rich Larson (patreon.com/richlarson) was born in Galmi, Niger, has studied in Rhode Island and worked in the south of Spain, and now lives in Ottawa, Canada. He is the author of Annex and Cypher, as well as over a hundred short stories — some of the best of which can be found in his collection Tomorrow Factory. His award-winning work has been translated into Polish, Czech, French, Italian, Vietnamese and Chinese. Besides writing, he enjoys traveling, learning languages, playing soccer, watching basketball, shooting pool, and dancing kizomba.