You’ve enjoyed a few of his stories and you follow each other on Twitter, so when you see that horror and weird fiction author Gordon B. White has started a Patreon, you think, “Sure, I’ll throw him a couple of bucks.” You pick the $7 tier—Postcards of Lesser Known Haunted Houses—thinking it might be a lark to get a picture and a microfiction each month for your modest contribution.

You missed the first month’s maildrop, but it’s just $7. In fact, you’ve forgotten about it until the next month, on the thirteenth, when your first perk arrives: a 3 1/2 x 5 postcard, postmarked in Seattle with a Forever stamp from the USPS’s Spooky Silhouettes line, this one with happy and sad drama mask ghosts framed in orange foil windows. It’s kitschy, but the picture on the front is just a normal house.

Craftsman-style, one story. Blue siding, red door, white curtains. The picture was taken at dusk, but the walkway lights give it a vibrance. In a cramped hand in blue ink, the back reads:

1247 Sawtuck Road. Haunted by a boy with the face of a stillborn Janus kitten and scissor blades protruding from under his eyelids. When he cries, he goes snip-snip. He is more often heard than seen, but whisker clippings are common in dusty corners or matted into unattended hairbrushes.

That’s it. Not without its creepy charm, but for $7? Inside, you leave it in the mail pile with the bank statements and explanations of benefits that you tell yourself you’ll read but will really just throw away next month. You forget about it there—the postcard, the boy with the kitten faces—but that night you wake from dreams of soft blade sounds and the sensation of thick hairs falling across your face.

Next month, on the thirteenth, the second postcard comes. The house on the front is two stories, boxy, with Tudor-style trim. The lawn is unkempt and a pink bicycle with training wheels is lodged in the hedges. Why, you wonder, would someone leave it like that if they were having a photo taken?

329 Mantooth Dr. A ghost of a bird resides in the attic; a ghost of a mouse in the pantry. A little girl with a mouth like a dripping bloom of wilted carnations hunts them from three a.m. until dawn. She doesn’t like to be looked at.

Preposterous. What are these, repurposed Tweets? Still, when you take it inside to throw it away—along with the card about the whisker clipping ghost—you can’t find the previous one. You set down 329 Mantooth to look through the pile, but when you turn back, the new postcard is gone, too. All night, you are sure you hear scratching in the cabinets, and when you wake up in the morning, you catch the hint of a sweet smell that could be flowers or rotting meat or just your imagination.

You cancel your Patreon pledge. You’re not scared, of course, but these dribbles aren’t worth $7. That’s the reason: value. And when you go to unfollow Gordon B. White on Twitter, only to find that his account seems to have blocked you and his DMs are closed? Well, that just proves you were right. There’s nothing worse than an “artist” who doesn’t take at least some small personal interest in his followers.

But next month, sure as the full moon, the thirteenth arrives and with it a postcard of an old Victorian, crumbling outside, the photo taken from behind rusted gates.

14 Continental. The final owner left three severed heads from bearded men on a closet shelf, radio speakers in each one’s mouth. They’ve never made a sound, but sometimes they appear in inappropriate places, eyes rolling left to right like a dial. The refrigerator is a typical hiding spot on hot days, the oven on cold.

You throw this one in the trash outside, but even so, you hesitate before opening your appliances to make dinner. Instead, you order out for Thai. While you wait for the delivery, you contact Patreon support and also confirm with your credit card company that the charges have stopped. You haven’t made any contributions in well over a month.

1415 W. Cherry. This house is fine except for one step which is heard on one stair at one o’clock every morning. Children say if you stand there, when the clock strikes, you can see Old Lady Winter coming. Adults, however, know you’ll die.

And on and on:

765 Warwick with its Confederate general who can find neither his boots nor his feet, cursing the medic that cut them off.

198 Chesham with the young maid stitched of spider-silk wedding veils, who hides in cupboards, desperate not to be married.

250 Hampton and the family. The whole family, tangled like a knot, rolling behind the walls.

All of them, still coming and coming and coming. Despite your best efforts, the stupid little made-up ghosts infiltrate your dreams, scratching and crying and prowling through the night until they threaten to spill out into the daytime hours. The scent of crisping beard-hair when your oven preheats; smeared lip-print streaks across the foggy bathroom mirror; impressions like cats’ feet across your comforter, but with too many toes that are too thin and long. You haven’t even opened the bedroom closet in the two weeks since it dawned on you that you’ve never owned a hatbox, much less that red one with the lid so loose that when large trucks drive past, the box trembles and whispers.

Then the card without a stamp arrives. It has no postmark, of course; no indication it was sent from the safe distance of Seattle. It has only an exterior photograph of your home. There you are, wearing yesterday’s clothes and frowning, framed in one window, while the other window, though empty, somehow feels full of gleeful malice. But is that a shape, there in the shadows, in the bushes just beneath it?

With sinewy fingers, stained blue, he pried the window open and crawled inside. Would he hide under the bed? In the hatbox’s closet? The crawlspace? He waited in darkness, yes, but not alone. For months he’d been sending his friends ahead to meet him there, until the beams were rotten with ghosts and nightmares grew like black mold in the walls. They would live here. Forever.

Shaken, you go back inside, turning on all the lights. And there’s your laptop, sitting on the living room coffee table where you certainly didn’t leave it. Its screen is dark, waiting.

As you lower yourself onto the couch, the floorboards bend beneath you and their knotholes open like mouths to groan. The air is thick; your cheeks are flushed and breathing labored. You reach down to wake the computer, but the trackpad is cool and greasy and leaves an inky smudge across your fingertips. As you look around for a paper towel or a rag to wipe your hand, you could swear a bulge in the wall quickly flattens as if embarrassed at being caught. A heavy truck rumbles by outside, and down the hall, from the bedroom, something snickers.

Back on your laptop, the browser is open to Gordon B. White’s Patreon page and has been scrolled down to highlight the notification that he now offers two new support tiers. For a recurring $8 donation, Gordon can take one ghost per month, put it in a postcard and send it away. It can find a new home far from you. However, for a single, much, much larger payment, he’ll take care of all your ghosts at once. He’ll put them into a single story and send them out into the world to haunt other readers wherever they may.

As you sign into your Patreon account, the sound of scissors, the smell of carnations, the creaking stair, the shuffling beneath the floor, all of it pauses. They wait for you to enter your credit card information. 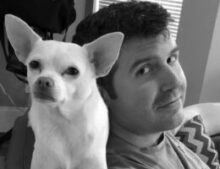 Gordon B. White is a Seattle-based author of horror and/or weird fiction. He is a Shirley Jackson Award finalist, a Clarion West alum, and the author of As Summer’s Mask Slips and Other Disruptions; Rookfield; and And In Her Smile, The World (with Rebecca J. Allred). Gordon’s stories, reviews, and interviews have appeared in dozens of venues, including The Best Horror of the Year Vol. 12. You can find him online at gordonbwhite.com or on Twitter @GordonBWhite.