During the lonely summer of 2020, I went on a long bike ride and saw a pair of egrets in a marsh; at the time, it was a beautiful and comforting sight. That evening, I watched trail cam footage of California wildfires blazing through a forest. This story knitted itself together quickly.

On sunny days, when the warmth placates the wildlife downtown, I watch the egrets on Camera Six. They live in a marsh north of the metro area, where the Osborne River widens after snaking through the small city. I used to go there, away from the hustle and bustle, to do watercolor studies of the willows. Occasionally, a chipmunk or frog would inspect my travel easel, and I’d freeze my hand and hold my breath until they scampered away.

Now the egrets’ white plumage slices through the gray camera feed as they emerge from the riverbank reeds and fan their wings in a glorious display. These two are a breeding pair, the last of their flock. Their pencil legs stalk through the river shallows as their ribbon necks flick into the muddy depths. And today they’ve brought a surprise.

But I’m getting ahead of myself. I must do the survey in order.

Camera One is nestled underneath the Thompson Bridge and has a view of the Osborne River’s west bank. The Conservation League board wanted a way to record erosion trends, so we drove distance markers into the bank to take measurements via camera stills.

When the shockwave hit, I didn’t know what to do besides hide under my desk and watch the last cup of Earl Grey I’ll ever have (in my British Museum mug!) smash onto the concrete floor. But afterwards, once the sirens stopped and the lights came back on, I used those markers to note a two-foot loss of river bank from the swell.

That time in the dark was unnerving, disorienting. Lonely, without the feeds. But everything’s alright now.

Camera Two was originally pointed at a large storm tunnel to track flooding, but the blast knocked it crooked to point at an office building instead. It’s fascinating what the bomb did and did not touch, since its target was the military base to the east.

I initially wrote this feed off as a loss, because there’s nothing interesting about street animal habitats. But recently a murder of crows has taken up residence in the brick shell. When the sun hits the building’s scarred face, the crows billow in and out of the blown-out windows and weave their own storm patterns against the pale sky. They’re only black specks on a silent screen, yet I get emotional picturing their cozy nests and remembering their friendly squawks.

Between this and the egrets, I decided to re-launch the Audubon Society with myself as President—but some screaming outside cut my inauguration short.

Camera Three monitors a popular fishing spot, where the Osborne River turns east and yawns calm and deep. This camera was closest to ground zero, so the radiation has eaten away at the delicate sensor. The picture is too grainy to read the graffiti on the boulders or the sign warning against eating certain types of fish. But the sign is no longer necessary, as the fish are safe at last.

I never cared for fishing or camping; I never understood the point of exploiting what I am trying to save. My colleagues claimed to love nature, but they trampled insect burrows with their expensive hiking boots and smothered scent trails with their designer tents. I told them we should be observers, benevolent guardians who retreat away from nature’s beauty and make penance for our sins upon it. That the only way to truly conserve nature is to remove ourselves from the world.

Perhaps that’s why my desk was moved to the Conservation League basement, where the state-mandated earthquake supplies were stored.

Camera Four was broken by the new wildlife.

Camera Five faces one of the city reservoirs, and there’s a street animal here. It’s hunched over on all fours, its pale limbs a mess of rags and oozing sores that leave dark stains on the cement edge. There’s no audio on the camera feeds, but I promise it’s moaning and gibbering as it dips its pathetic, twitchy hands into the cool water. The water doesn’t need any more filth.

At first I didn’t mind the local wildlife, especially when they restored electricity to my monitor room. Even the endless, cacophonous days of trucks and loudspeakers begging for able-bodied survivors to take up the cause were amusing in their novelty. But now the useful ones are gone, and the remaining ones spend their time polluting the public fountains, rubbing their stumps on their dead herd mates, and gurgling outside the basement wing door when they stumble their way downstairs.

Luckily, I have plenty of supplies, and the streets should be quiet by the time I need more.

Which brings me back to Camera Six. The egrets have emerged from the underbrush, and with them is a juvenile. It’s nearly indistinguishable from its parents, save for its odd, disjointed wavering between the flowering cattails. After studying it for a while, I realize the cause. One of its wings is shriveled and bare, tucked close to its chest and affecting its balance. This egret will never fly away. It will stay here, in the marsh, with me.

My beautiful family feeds and preens until the sun sets behind the twisted skyscrapers. The camera image is grayscale, but I still remember the colors: first persimmon, then crimson-laced pink, next a deep scarlet, and finally black. 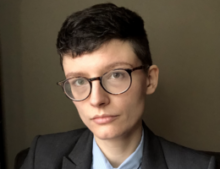 A.L. Goldfuss is a speculative fiction writer and software engineer. Xe lives in the Pacific Northwest with xir twin collections of tea and carnivorous plants and looks forward to riding trains again someday. In the meantime, you can find xem on Twitter (@alicegoldfuss).