The Saints saw nothing but rock and scrub, the one lone Joshua tree dead, its arms defeated. They traveled by wagon, the four still alive, their clothes stiff with their own stink and with the smell of dirt. The dead they buried or thought they buried along the way. The animals gone, all but one, and that one fading. They tied casks to the wagon, dragged the wagon themselves, the wagon lighter now because mostly empty. They carried hopes and rough blankets and hardtack. The desert blazed. They walked, their boots torn, their hats soiled, nothing soft on them, all the skin an itch, no sweat on their brow. There is a heaven upon the Earth and also a hell and they were upon it, near its rim. They all dreamed it. They moved because the face of the waters moved beneath them. They could feel them, could feel the waters, could feel the face. They moved toward the water, all the men, all men. They lost the women, buried them. They lost their children, too small and too weak to survive. They moved toward water.

The child came in the night and sang. She knew all the songs. They knew her, the daughter of an elder, a girl dressed in calico and bonnet. She followed them. Her shadow stretched long into the horizon.

They tried chasing her away but the child would not be chased. They prayed but the prayers fell short of the heavens and did not have their intended effect. The child prayed with them. When they told her that she should not pray she pointed to the ground and smiled, her teeth all needles, her mouth moist and pink.

She wanted to shake their hands and they had so far managed to keep her at a distance by throwing rocks. She had been dead, they saw her die, but she returned, and walked where they walked. If they could walk elsewhere they would, but the casks were too light and they walked toward water, and the child walked with them, smiling, praying with them, singing to them.

They knew they walked near the rim of hell, but they thirsted and had no other place to go. The child sang “Abide with Me.”

They were followed by a bird whose shadow crossed theirs, but they did not know whether to take it as an omen of providence or as a sign of the face slumbering beneath them. They had been walking for days and dreamed of the face and dreamed of an eye whose pupil dilated as they repeated the words of the Prophet.

The face slept, the men dreaming its dream. It was no angel, no thing of God, nothing sanctioned by Smith. When one of their own said it was a thing of the other side, the child said, There is no other side. She said, All creatures great and small.

Then she stuttered, could not stop repeating the last word, so they walked and dragged their wagon in the awful wake of her voice. The child said, Small, small, small, small.

They feared for the life of the horse past any real logistical concern. The horse grazed, the horse was given water from the cask, the horse was tended and cared for. Brushed. Petted. The elder whispered, There, there, there. The child suggested that they slaughter him. They could use him for food. Or they could consider the killing a great kindness. Or both. She pointed to the ground and said, Abraham. An offering pleasing to the nose.

The face slept, the men dreaming its dream, but the men knew, could not help but know, the face was waking up.

In the morning the earth itself shook, the landscape convulsed, the red rock of the far-off range coughing a fit of dust, the underbrush puffing, birds startled into low panicked flight, cloud and sun recoiling. They walked toward the heart of the convulsion. They could feel the face beneath the plume of dust. They could feel their own faces drawn toward the distant ridge now fractured and bloodied and rusted with sheared rock. They walked, days away still, the child with them, the thick skin of the ground beneath them uneasy and rumbling.

Let her, one of the Saints said, thinking of his own dead child. Let her come over. He pulled out a knife and said, Let the abomination come over.

They thirsted, their tongues swollen, the morning heavy and sour. Their feet cracked inside their boots. Swollen. A nail broke into skin and grew. Blisters burst but grew anew. All wounds pustulent. At night by the fire they drained the carbuncles and wounds of their feet with a long needle they heated to the red of the sunset, the red of the rock, over the fragrance of the camp. They burned sage and scrub and it all smelled of heaven. Their own bodies took on the sweet smoke of the campfire but in the morning the stink of infection rose from the rub of wool and leather on men.

Let her come over, Jacob said. He was the youngest of the men. His own daughter was a full week gone, buried.

They threw a blanket over her and trussed the bundle with hemp rope. She screamed. The needles of her teeth tore through the homespun. The morning fire glowed and insisted on its smell of heaven, and the men threw her on the pyre with gloved hands. The noise she made deafened them to the convulsion of the land around them, but they could see it. They looked away from what they had just done because for miles and in all directions small puffs of dust rose from the cracked earth. The ground moved beneath them once more. The child grew quiet. First the homespun lit up, the flames as white and parched as the sky, then the calico dress and the bonnet, then the child. The smoke grew dark. The earth trembled, the world groaning from distances a full week’s walk away, the distance and the sound troubling the joints of their jaws, the base of their spines. The child screamed but creation screamed as well and the latter drowned out all else. Even their prayers. Even their song.

The child was naked and in flames and screaming. Her flesh blackened and turned rosy and white again in the flames. Her arms poured out of her bones like the petals of a flower, the skin on her back and torso growing spiny like a cactus. Her flesh shivered out of her but returned. She turned into a mass of flesh-colored snakes. She was all worms and teeth.

She would not die.

The one who said Let her come over took his knife to her in the flames. Jacob sang while his arm dipped into the smoke, the flames, the worms. He jabbed the knife into her neck. The flesh recoiled and surrendered. He sank his knife into her neck and when the head was finally severed and his own arm was burned and blackened from the pyre and when the shivering parts of her body settled back into the bones, that is when the world shushed.

Then they heard the desert winds dying into the blue void of morning.

Then they heard the rush of sky overhead like the voice of the Angel.

The head of the child rolled off the pyre and took on the red dust of the ground. She blinked, and she spoke, but they could not make out the words, and the man who had torn her on the pyre could do no more, his arm charred and red and wet, the knife black from its work.

The horse they had saved looked stupidly on. The body of the girl fed the heavy flames but was not consumed. One of their own had not stopped singing, but they could not hear him in the din of creation turning on itself.

The rain that fell on the camp fell from a cloudless sky. The water drenched the misery of their clothing and awful sores of their body, the men bowing to the cold and mercy of the heavens. They stumbled and struggled for half an hour to set the cask aright, to undo the seal and open it to the new water, but it did not matter because the rain would not break for days. They shivered and huddled close in the mud, Jacob the youngest dying but still holding the knife, while beneath them the heavy earth waited for the face beneath to wake up, to wake up completely. A giant bird sloped on its long legs from scrub, a vision of Eden, the red of its feathers all wrong for the wet red of the desert. The head of the child had not stopped blinking. That was all right, they supposed. One of their own had not stopped singing. The men huddled and sang “Abide with Me.” The head of the child mouthed the words. They all sang together. 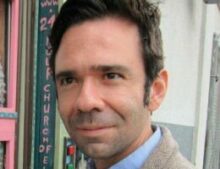 Juan Martinez is the author of Best Worst American, a story collection published by Small Beer Press and the winner of the Neukom Institute Award for Debut Speculative Fiction. His novel Extended Stay is forthcoming from University of Arizona Press’s Camino del Sol series in 2023. He lives near Chicago and is an associate professor at Northwestern University. His work has appeared in many literary journals and anthologies, including Ecotone, Small Odysseys, McSweeney’s, Glimmer Train, The Sunday Morning Transport, Shenandoah, Huizache, NPR’s Selected Shorts, Mississippi Review, and is forthcoming in Norton’s Flash Fiction America. Visit and say hi at fulmerford.com.