All My Princes Are Gone

When the world was young, it was filled with monsters.

He was born from the sky and I was made from the earth. I was shaped from black mud into a convex structure of dark space and hard dips. The brunt of two thick palms around my waist made a place for them to fit comfortably later. The inside of my thighs were dimpled with thumb marks; two, where he pressed just deep enough to feel the vein throb. Deep enough that my husband could trace the pulse when he pulled my legs apart. Our first child was born like this. He was born swathed in mud, his heartbeat a delicate thing that beat down the walls of his ribcage like desperation. His father held him up by one leg, crushing his ankle until the soft child-flesh bubbled up around his angry fist and turned bone white. On his tiny foot were four black claws. In his mouth, teeth that could shear; his head bore a wolf’s coarse fur to cradle him from the wind’s chill. I had given him these gifts. I had birthed him the best I could.

“This is an animal,” my husband said.

I asked him: “Why shouldn’t our sons have teeth and claws?”

“For the same reason our daughters should not,” said he. And then he struck my child’s head against a rock and came to embrace me with his bloody hands. He marked the day with two slick handprints at the base of my spine.

All of my daughters were born with teeth.

My first daughters were born together, a bloody tangle of smooth rolls, boneless fingers tugging at each other’s fat, grasping for purchase. When first I saw them I thought of two goatskins filled with water—flabby things that would change shape and burst if you held them too tightly. The first ones hid their teeth. We were not yet timid, but we were careful. Ishtar’s tooth was in her heart, and Ereškigal’s in her mind. They were every star in my sky: the brightest, the strongest, the swiftest of all my children. Ereškigal learned to be subtle early; she crawled back into the womb when she was grown enough, making her kingdom in a cradle of dirt where our power is strongest and her tooth would always be hidden. Ishtar wanted for conflict and walked beneath my husband’s sun. Ishtar wanted for the fear in a man’s eye when she cut open her chest between the second and third rib and twisted free a sharpened fang. She wanted for the way it glistened in the light.

To Ereškigal she would brag, “Weren’t they surprised.”

My husband’s new wife was born from his flesh and all of their children were born toothless.

“There is no need,” she said to me. “This world is soft,” she said. “It is soft, as fruit is soft. We don’t need fangs to taste its juice.” The way her thumb carved a shallow bruise into the fruit reminded me of my son’s head. I curled my nails against her knee and leaned over her; I licked the tangy juice from the groove beneath her lips. I found the dimpled flesh inside her thighs and rested my thumbs there, pierced the vein with loving precision and watched her eyes go black. Listened to the keening noise that fluttered inside her throat.

But when I licked the tangy blood from the groove beneath my thumb, she made no sounds.

“Ishtar is careless,” Ereškigal said to me, “Ishtar is salacious. Ishtar is unsubtle. When Ishtar speaks, I claw my ears raw and bloody. Ishtar would war on mortal men. She would have them war upon each other for her amusement.”

Ereškigal slept inside my ribcage and whispered such things directly into the thin skin of my lungs.

“No,” Ereškigal replied, “I have no interest in Adam’s world. I would have us do nothing at all. I would sleep until they were all dead and their rotting flesh made a blanket of filth for me to wash my feet in. They will not last.”

So I put a tooth into the fruit.

When he found out what I had done, my husband came for me. He came for me with a hundred of his soft sons and a hundred of their spear-teeth to pierce the places where my flesh had grown hard and thorny. They pried the plates of bone and hair from my belly and found where the flesh was stretched taut over my bloated womb, spongy thin and quivering like the membrane of an egg. I lay in the dirt and laughed as my skin burst and the black blood bubbled out of me—bog-thick, sharp on the tongue—and washed over their feet.

For I am the mother of monsters and when they split me open, weren’t they surprised.

A tooth for her tongue would thirst for light and blood. She would ask, “Which does a man need more?” Adam’s sons will always choose light.

A tooth in her hand would make her a trickster. She would hold it out for Adam’s sons and they would grab for her eagerly. They would make a pact with her and tear each other to strips for bloody gold. They would not see that her face was a beast’s.

Be careless, my daughters.

When you speak let the world claw itself bloody.

When my womb was empty, Adam and his sons peeled the rest from me. They took the entire length of my mud skin and stripped my bones bare.

“No more monsters from your poison womb,” my husband said. “From your corpse I will grow wheat to feed my children.”

He took my skin and stretched it over the world like the rind of an orange.

Ereškigal wished to sleep. She went to Ishtar and said to her, “Our mother has been killed. Our father has fed her body to his sons.”

“Then I will eat his sons,” Ishtar replied.

“Then you will be killed as well, and your heart will be used as kindling for their sun.”

“Then I will eat their sun,” Ishtar replied.

“You will burn from the inside and never stop burning.”

“Then I will eat myself,” Ishtar replied.

“Sister,” Ereškigal said. “Have you ever seen my tooth?”

“No,” Ishtar replied, “You hide it away as if you are ashamed. You would bow to Adam’s sons. You would allow them to tame our savage world as you have been tamed. You were born tamed.”

Ereškigal reached behind her eye. She found the place in her skull where she hid her tooth and twisted it free with two pointed fingers. She held it up to the light and wanted for the fear in her sister’s eyes when she placed it between her lips.

“A disease of the feet against your feet,” she said, and Ishtar’s feet curled into clubs and she fell to the ground.

“A disease of the hand against your hands,” she said, and Ishtar’s fingers withered to ribbons.

“A disease of the eye against your eyes,” she said, and Ishtar’s eyes turned black and wept blood.

“A disease of the mouth against your mouth,” she said, and Ishtar fell silent.

Ereškigal stroked her sister’s hair and cleaned the blood from her face. “We will sleep,” she whispered, “We will sleep until their soft bones turn to water. We will wait until their corpses make the earth a throne.”

All my princes are gone. But my daughters. 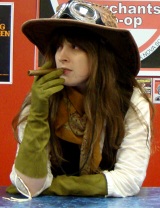 Jennifer Giesbrecht is a native of Halifax, Nova Scotia where she is earning a degree in History and Methodology. She currently volunteers her talent as a dramaturge at a local theater company. This is her debut publication.