A Girl of Nails and Teeth

One thing I find fascinating about parenthood is the fact that protecting your children too tightly from the monsters in the world can sometimes become, in itself, a monstrous act. I wanted to write a story with this kind of double vision, where viewed through one lens, the mother is protecting her daughter, but viewed through another lens, the mother is hurting her daughter, and it’s hard to say for certain which version is true.

The girl trims her fingernails carefully, dropping each pale crescent into the glass jar in front of her. Her mother stands next to her. Watching, waiting.

It’s the middle of summer and the girl steams in the heat, anxious to finish her task so she can go outside and play with the other girls in the neighborhood. She can see them through the window, their shiny bikes propped against the telephone pole, their laughter riding the wind like birdsong. Half her mind is on the nail scissors, the other half on the laughing girls.

On the third finger of her left hand she rushes, cuts too close to the quick. Blood beads up under her nail. The clipping falls to the hardwood floor with a muted plink and scuttles under the couch.

Her mother gets down to her hands and knees to look for it. She is no longer young, and the movement takes visible effort.

You’re always so careless, she says as she crawls. You’re old enough to know better.

The girl sits on her chair, enduring her mother’s quiet scolding, which ceases only when the lost nail clipping is recovered and dropped safely in with the others.

They have glass jars all around the house, of all different sizes, carefully labeled and stored. Jars of the girl’s hair, collected each time her mother gives her a haircut over the kitchen sink. Jars of her blood, from the phlebotomies her mother conducts once every six weeks, which are followed by a carton of apple juice to restore the girl’s blood sugar level. Jars of shed skin she’s peeled away from the pads of her thumbs, the callouses on her toes, the chapped layers of her lips. A jar of all her baby teeth, except for the one she accidentally swallowed while eating an ear of corn, after which her mother pulled out the rest with pliers.

Her mother leaves the jars in plain sight to reassure herself of their progress. The only occasion for which she puts the jars away is when someone comes to visit. On those days, the girl and her mother pack everything into the pantry: teeth buried inside sacks of rice, blood concealed behind cans of condensed soup. Only after the jars are safely tucked away do they unlock the front door and greet their neighbors with close-lipped smiles, holding in all the things they cannot say.

Sometimes, the other mothers burst into tears in the living room, mourning what they have not yet lost. The girl stands in the hallway and watches her mother comfort the other woman with sugar-spun lies: yes, I feel you, yes, I know what you’re going through.

We can’t tell them the truth, her mother reminds her afterwards. It won’t work if someone else tries the same trick.

The girl is too young to understand. She waves through the window as the other mothers walks away.

The simulacrum sits waiting in the back of the mother’s wardrobe, hidden under a spare bedsheet, a life-sized doll made of wood and linen and desperation, faceless and unfinished. It has been sitting there for longer than the girl has been alive. The mother started building it the day the doctor first told her she was expecting a female child. The same day she first put her hand on her swollen belly and felt the baby squirming inside her, a wild thing, desperate to live.

The girl has not yet seen the simulacrum. She has only caught glimpses of the blueprints, which her mother takes out once a year to update the necessary measurements: the size of her feet, the circumference of her skull, the length of each arm.

When the time comes, the mother will finish the simulacrum alone. It will have a perfectly painted face that mirrors the girl’s own. It will have the girl’s real blood pumping through its limbs, her real hair stitched into the pale cloth of its scalp, her real teeth drilled into its gums. Her real fingernail clippings glued onto its fingers and toes, lined up like the tiles of a mosaic.

The mother will leave the simulacrum outside their front door and wait. Even now, even after all her planning, she does not know for sure if it will work.

She will spend the whole night waiting, her arms wrapped around the girl, her pulse hot and fever-quick, listening to the weeping and wailing of the other mothers in the neighborhood, who were not clever enough to save their daughters this way. 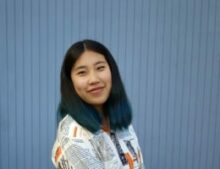 Hannah Yang is a speculative fiction writer who loves all things strange and surreal. Her stories have appeared or are forthcoming in Analog, Daily Science Fiction, The Dark Magazine, Nightmare Magazine, and other marvelous publications. She has a BA from Yale University and lives in Colorado. When she’s not busy writing, you can find her painting watercolors, playing her ukulele, or hiking in the Rockies. Follow her work on hannahyang.com or on Twitter at @hannahxyang.