It’s difficult to make sense of death. Intellectually we understand it, but emotionally there is uncertainty and fear and grief and anger. This essay was an attempt to process those feelings.

Since writing this essay, we lost two more cats, one to old age, the other to lymphoma. Both were euthanized because that’s how you show mercy to animals in pain. One of them suffered an allergic reaction to the sedative and in his final moments he was dizzy and vomiting, yet the other nestled in his cat bed and drifted off. Two more deaths, two more dead who continue breathing.

In the coffin, my father’s chest rose and fell, gently, as if he were sleeping. He could be dozing as he often did on the living room couch, only this time dressed in a suit and without any cat curled in the crook of his elbow or on the center of his chest.

He was dead—I’d witnessed the heart attack that crumpled him to the floor—yet I was watching him breathe.

A gentle rise and fall.

Everyone spoke in hushed voices. Someone blurted a ripple of laughter and someone else honked a nose-clearing bleat. People took turns staring into the long box where my father laid, hands joined across his stomach, eyes and mouth permanently closed.

If I placed my eleven-year-old hands on his chest, would I feel his dead lungs fill with air?

Twenty-four years later, my mother struggled to breathe from a hospital bed where she’d lain for weeks. During that time, the doctors had conveyed a gradually deteriorating sense of optimism and the short, bearded doctor on call that night already asked me about a DNR and a morphine drip.

All her life she battled bouts of bronchitis and pneumonia, and her greatest fear was suffocation. Over her open mouth, a BiPap breathing-machine mask forced air down her throat. The strong airflow pushed her lips off her teeth in a grotesque grin.

On a Saturday in June four months later, I was running down the driveway. A neighbor spotted a cat in the road and knew we had five. We used to have seven. One went into the woods behind our home and never came back, and the other was killed in the road just beyond our driveway—the exact spot where I was running right then.

That other cat had been killed the previous October, and when I scooped her into my arms, she was heavy, heavier than she’d been in life. I screamed my wife’s name over and over and stumbled back to the house with our poor, dead cat held against my chest. Her head hung in a terrible, peculiar way, and her pink tongue jutted from her open mouth.

All her breath was gone, but this time when I darted into the road, I found our cat sitting Sphinx-like, head up, legs stretched before her.

She was dazed, blood filling her left eye and bubbling from her nose and mouth—but very much alive, breathing rapidly. I cradled her just as I had our slain cat, but this time there was hope.

In the car speeding to the emergency vet’s, the cat’s breathing slowed, and I shook her. “No,” I said. “No. You stay with me. Stay awake.”

Her face was skinned, her eye blinded, but she kept breathing. Still does.

In that hospital room on a February night, the BiPap machine was turned off. We’d been summoned back in the middle of the night, it was cold and sleeting, and my wife, best friend, and I stood witness.

My mother’s breath caught, as did mine—

Ten years before, my aunt tugged down her oxygen mask and said her final words between gasps. “I just want to live,” she said.

And for a little while, she did. My mother at her side, weeping. I was unsure what to do. My aunt’s eyes were wide and fearful—those ragged breaths just kept coming.

The brain cancer killed her a day later, and the next time I saw her, she was a bag of cremated ashes inside a white biodegradable box.

For my mother, it was cardiopulmonary and kidney failure, not cancer. Months of hospital visits, surgeries, physical rehab, all of it ending here in a hospital bed, my wife and best friend holding her hands, me kissing her forehead—and when the final breath left her, it was so slight and peaceful, and the sun pushed over the mountains along the horizon and bright morning light splashed the windows.

A moment of grace.

That’s how it should be, you should die peacefully with your loved ones around you and the sun rising as if in heavenly blessing, except it’s months earlier and I’m on my knees in the October cold, scooping out clumps of dirt, my hands sore and cramping from shoveling rocky ground. My throat is sore too, because I had been screaming accusations, damnations, and threats at every passing car—and at the darkening sky above.

When I placed our cat in the ground, wrapped in her favorite green blanket, the one she would knead and suckle on, white paws flexing, drool slipping off her muzzle to blot the tattered cloth, I found it was too final, too absolute and irrevocable, to cover her and fill the hole. Too much like forgetting.

Yet I did fill the hole, smoothing over the dirt. The ground was cool, and beneath my hands it lifted just slightly and dropped.

A gentle rise and fall.

My father in his coffin. My mother. My aunt. And a cat. 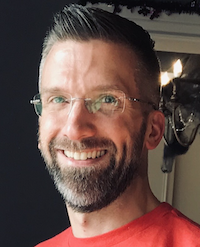 Chris DiLeo is the author of several horror novels, including Revival Road, Dead End, and The Devil Virus. He is a high school English teacher in New York. Follow him @authordileo.