Let Me Be Clear

I saw Nightmare’s call for creative nonfiction very close to the time that I saw a tweet (from @shiraisinspired), reshared by someone I followed, describing obsessive-compulsive disorder in a way I recognized, in a way that made me feel seen, made me feel not alone. And I’ve often embraced open communication as a form of exorcism, so I thought writing openly about my experience and how ultimately nightmarish it has sometimes been, would be healthy, and maybe helpful to someone else in the way that tweet was to me. So this little essay is an intensely personal piece. It scares me a little to share it, but it seems the right thing to do.

There is the moment when you burn down the church during Christmas Eve candlelight service.

But they didn’t know what would happen, did they, when the greeters handed you the slim white candle with its paper guard, when they fed the small flame from their own. And your parents didn’t listen when you said you wanted to stay shut in the bathroom, crouched on the faded pink carpet. So it was no one’s fault but your own.

There is the moment when you place the can of corn just so on the high pantry shelf, and it falls, and it cracks open someone’s skull.

But they didn’t know what would happen, did they, when your parents asked you to put away the groceries, when they lugged in the cloth bags of food and let them thump to the linoleum floor. They did not even imagine the potential of canned vegetables. So it was no one’s fault but your own.

Let me be clear, I never murdered anyone.

I read a Twitter post earlier this week. It was by no one I followed, no one I had heard of before, but it came across my feed by some happenchance of a retweet. It explained OCD as I had experienced it. Not as a neat freak, though I won’t say that I don’t find right angles comforting. Not as a germaphobe, though who doesn’t wash their hands a little longer nowadays? It was comforting to read this account, to see someone exclaim that they “would not wish it on [their] worst enemies.” Yes, this is what it was, what it is like for me, I explained to my husband. Exactly like this. How can two people who know nothing of each other experience the exact same mental landscape?

There is the moment when you swerve over the yellow line into oncoming traffic, when you aim for the headlights of the other car, not by any accident.

The tweet introduced a term for understanding my particular experience of the anxiety that I had not encountered before. OCD anxieties like my own, this tweet explained, are ego-dystonic. They are explicitly counter to one’s concept of self. They act out visions of things you will never do, that you never want to do. And they are incredibly hard to share with others because of that. It sounds laughable to tell someone, as you participate in a writing workshop on a sunny white porch in the summer, that you are worried you will burn down the church on Christmas Eve, that you will cave in someone’s skull with a can of corn. I don’t want to, you could clarify, but that becomes awkward, doesn’t it? Glad you don’t want to, I guess someone could say. That’s another thing that tweet got right—how can you open up about this?

There is the moment when you disavow your faith, you embrace the devil like a Puritan woman in a Hawthorne story. Perhaps the room smells of brimstone and you find it hard to pray. Jesus turns away from you when you take the mark of the beast.

My OCD, as I know it now, hit me most acutely as a teenager, thanks no doubt to the chemicals that make teenagers teenagers. And my only way of coping was to ask again and again, Am I the villain? And to hear constant, softly-spoken reassurances. No. No. But the problem with intrusive thoughts is that they are intrusive. DAMN IT.

There is the moment when you cheat on your husband. You could feel the warmth of the other man’s skin. You laughed with him.

There is the moment when you stand to write so as to avoid sitting too long and aggravating your sciatica. You write about the way that OCD has haunted you, unforgiving and illogical. You write the fiction of your anxieties as the fiction they are. 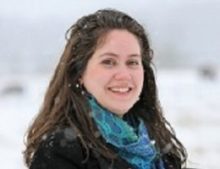 Erin K. Wagner (also E. K. Wagner) is a professor by trade, a medievalist by discipline, and a writer of speculative fiction by design.

She lives in upstate New York, a storied and story-making place, but her roots are in Appalachia, since she grew up in rural southeast Ohio. Presently, she teaches an array of literature and composition courses in the SUNY system as an associate professor. Her interests, both academic and creative, lie in examining how the human responds to the nonhuman (whether that be AI, religion, or nature).

Her short fiction has appeared in Clarkesworld, Apex, and a number of other spec-fic publications. Her novella The Green and Growing is available through Aqueduct Press. An Unnatural Life, her second novella, is out from Tor.com.