Growing up in Alabama, our teachers presented a version of the state’s history that resembled Disney’s The Song of the South. It was easy enough to realize that we were being lied to, but without the facts of history we were left to fill in the gaps. We colored in the local haunted house with our own fables and the fables passed down from older siblings. In so doing, we reproduced in symbol if not in word the truths of hoped-for horrors, poisonous wealth, and unimaginable agony. Our heritage isn’t being lost by removing statues of men from cities those men never visited; our heritage is being knocked down to make way for another stupid strip mall.

Twenty years ago, they tore down the old Greenleaf Mansion, the former residence of the manager of the Profile Yarn Mill that became the Union Yarn Mill that became the Fruit of the Loom Yarn Mill that became a discarded pile of bricks after NAFTA finished with Alabama. Twenty years ago, without so much as a second thought to the phantoms that dwelt there, they tore down the Greenleaf Mansion; I’ve no idea what happened to the abandoned and stripped-down World War II fighters that sat in the overgrowth behind the place. They tore it down and, in its wake, we got a CVS, a Huddle House, a Captain D’s, and a new hotel.

I don’t shop at any of those.

“Well, I like the CVS,” a defiant neighbor says when I share my disdain with her. “It’s convenient!”

Another neighbor looks me in the eye and, through his false teeth and farmer’s tan, tells me, “Them woods was full of druggies and homeless people.”

A town councilman rolls his eyes and shakes his head when I lament the loss of the local legends. “What do you mean?”

So, I tell him. I tell him about the stories we told as children—the ghost of the slave woman who walks the grounds not far from General Beauregard’s headquarters as she searches for her drowned infant—the legend of the lost Indian mound full of sleeping rattlesnakes guarding a treasure greater than King Tut’s—the gasped myth of the Confederate soldier who died too young, preserved spotless like a saint in his crystal coffin (walled away in the crumbling residence that wasn’t completed until the early twentieth century) and ready to rise again like the half-remembered chorus from a song by Charlie Daniels. I try to convey how people need these things, need stories and myths and ghosts and urban legends to manifest the collective Shadow of a place, to give the darkness an external form.

“Them woods was full of drunks and homeless junkies,” he laughs as he goes back to preparing a Sunday School lesson. “Besides, having those businesses there? That’s real convenient.”

He snorts, tosses down his pen and glares at me from behind puffy red lids and half-moon spectacles. “Where the Hell’d you hear that?”

“Just some guy,” I say as I leave. “Some guy who was always right about everything.”

Twenty years ago, they displaced the local ghosts. Last I heard, they’d moved to a nearby clump of trees where, out of convenience, they’d taken up drinking and drug abuse. 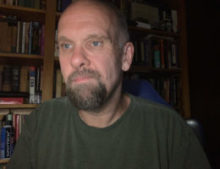 Victor T. Cypert is a writer of short stories, essays, and poetry. He holds a Master of Fine Arts in Writing Popular Fiction from Seton Hill University. His work has appeared on toolband.com and in Lamplight Magazine, Wild Musette Journal, and Illumen. He is the second place winner of the 2017 Parsec Ink short story contest. He lives in Alabama.