As a kid, I found my mother’s childhood home both exhilarating and terrifying. Mysterious humps bulged beneath the kitchen tile. Doors along the shotgun hallway opened reluctantly or not at all. My grandmother’s mirrored closet reflected her skirt suits, floral scarves, and Sunday hats in a strange, bluish light. But nothing delighted me more than the room at the shotgun’s barrel, where my youngest aunt, Eunice, had slept as a girl. This room, my mother said, had been haunted once.

Every time I went in (never by myself) I looked for evidence of the haunting: a chill on the air that did not belong, outlines of the posters that had once smothered the walls. As a teenager, my aunt had loved heavy metal bands. They inspired her own drumming; the walls of her room bristled with posters. Her parents weren’t amused—the typical incompatibility between teenage interests and an earlier generation’s sense of decorum. Harmless, really, until the night when, as my mother tells it, Auntie Eunie started to scream.

The family found her in the hall, sobbing. “There’s something in my room,” she said. “Something woke me up.”

In the dim streetlight, with Eunice’s screams still ringing through the house, the bedroom had turned eerie. Sheets shoved aside, the bed ringed in elaborately painted faces, eyes dark and mouths screaming. A chill that had not been there before, in that sweating Arizona night.

My aunt took all the posters down. My grandfather, a minister, prayed over the room. But there was always something off about it. No one could sleep in it for years.

I had an early attraction to horror, despite my cowardice: Deborah and James Howe’s Bunnicula: A Rabbit-Tale of Mystery, a tape I borrowed from the library and listened to at the kitchen table, scared stiff by the fuzz of the narrator’s voice; Alvin Schwartz’s series of Scary Stories to Tell in the Dark, with Stephen Gammell’s original, horrifying imagery: grinning, smoking skulls and faces white and hollow-eyed, gory reds and haint blues, terrifying even when viewed in the bright, afternoon sun. But my attraction did not begin with these books. It began with family stories.

My mom and dad’s scary stories formed the backbone of our family’s folklore. My mother’s stories focused on her family: the haunted posters of heavy metal drummers; the night a young niece dug a massive, clawed hand into my mother’s back, while my mother lay paralyzed in bed, unable to scream. My father’s stories pulled from a creepy cast of neighbors: the werewolf next door; the lady veiled in a swarm of wild bees; a witch who beckoned to passing children with a spectral hand.

I’ve heard these stories so often, the terror has worn off. Still, the memory of it lingers. To know that my parents once experienced the creeping sorts of terrors I had only seen in movies and books was thrilling. Through them, I was only one degree separated from the supernatural.

The back room of the little adobe house of my father’s childhood was an add on. It had no windows, though it overlooked a backyard. The wiring was faulty, lightbulbs burning out in days. If you had business there, you did it fast.

One day, my dad and his youngest brother, David, were playing outside. Eventually David went inside. My dad followed minutes later. As my dad came into the house, a wail rose up from the back room. My dad went toward it. His mother was already there. David was in her arms, sobbing, bleeding from the head.

He looked at my dad with teary accusation. “You pushed me,” he cried. The story came out in leaky sobs: David had gone into the back room to fetch something and my dad had sneaked up from behind and pushed him. My dad denied it. He had just come into the house.

My grandmother looked between her boys, in search of an explanation. “But I could tell from the way she was looking at me that she believed me,” my dad said. “She knew I hadn’t been in that room, that I hadn’t pushed him,” my dad said. “There was something off about that house, and she knew it.

“But we didn’t talk about it,” he added. “You can rationalize a thing if you’re the only one who experiences it. It’s harder to do if there are other witnesses, too.”

But there are always witnesses.

My father remembers how his mother would wake him and his siblings at night, sprinkling them in tap water she’d blessed with a prayer, protecting them against the unclean spirits of a restless house. Meanwhile, my mother remembers how her own mother visited a witch. My mother sat quietly in the front room of the house, while her mother conferred in the back room. Of these sessions, my mother only remembers the dark.

Both of my grandmothers were devout: regular churchgoers, my mother’s mother a pastor’s wife. And yet there were corners where God could not reach them, places where witches, rootwork, and spells could provide the only light.

My parents told these stories of roots and witches more rarely. They were not horrifying, but they carried a sense of dread that followed me longer than the jumpscares of other family stories. Because for me, these stories—of women standing against an unseeable darkness with nothing but tap water and prayer to protect them and their children—drove at a deeper truth: that when my parents spoke of witches, roots, and haints, these fantastical terrors were not necessarily what they meant.

I once wandered into my parents’ bedroom while my mother was cleaning the bathroom. She’d emptied the cabinet beneath the sink, excavating eons of contents older than me: crumpled bottles of pink lotion and cratered jars of Vaseline, hot combs with tight singed teeth grinning against the carpet. But it was the bulging gallon Ziplock bags of dense, black hair that stopped me in my tracks.

There were several, all swollen, the plastic seams pink and slippery. “What’s this for?” I asked. My mother made an odd gesture, rueful embarrassment mixed with amusement. “You and your sister’s hair,” she said. I knew my mother swept up our hair after every hair-care session. I had never realized she was saving it. She kept it as a memento, she said. But it was outgrowing the cabinet, and she was finally getting rid of it.

Years later, I asked her about the hair again. At first, she gave me the same answer. But then she paused, considering. “There was this idea,” she added, eventually, “that you didn’t want anyone to get a hold of your hair. That strangers could jinx you if they got a hold of it. So you kept yourself safe. You didn’t throw your hair away.”

Every scary story my parents shared can be broken down to its rational parts. The stories lose their frightening edge, once logic and rationality intervene: my auntie’s possessed posters mere nightmares; the scratching hand of my mother’s niece a sleep paralysis dream; the presence in the add-on room of the adobe house the fault of poor wiring. But there are other stories that my parents recounted only once my sister and I were older, stories that have nothing to do with witches, roots, and haints. My mother and her siblings crouched outside, hiding as their father threatened to shoot their screaming elder brother; unacknowledged pregnancies and miscarriages kept secret, a baby buried in a shoebox in the backyard; a neighbor gunned down point blank, dragging himself across the street to my dad’s house for help; my grandmother firing on a burglar through the kitchen window. My parents have dozens of these stories. However horrific, this was the stuff of their childhoods. But it took them years to tell it.

So until then, they gave my sister and I ghost stories. In their mouths, the supernatural became a language by which they spoke about the unspeakable. The supernatural was a way of seeing the very real horrors of their childhoods for what they were: a vine so big, the entire house must be dismantled in order to dig it out, an infestation that required exorcism, not fumigation. This was how they shared themselves, before my sister and I were old enough to understand: through witches, roots, and haints. 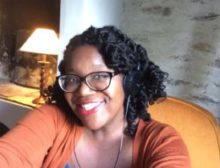 Stephanie Malia Morris is a graduate of the 2017 Clarion West Writers Workshop, recipient of the Octavia E. Butler Memorial Scholarship Award, and a 2019 Kimbilio Fellow. Her short fiction has appeared in FIYAH, Pseudopod, Nightmare, Apex Magazine, and Lightspeed. She has narrated short fiction for the Escape Artists podcasts, Uncanny, and Beneath Ceaseless Skies. You can find her online at stephaniemaliamorris.com or on Twitter at @smaliamorris.