The H Word: Why Do We Read Horror?

When I was asked to contribute to this column, I thought I’d probably write about cosmic horror — after all, I edit and publish a Lovecraftian magazine (The Lovecraft eZine). That article was almost completed, however, before I realized that my heart wasn’t in it. So for better or worse, I jotted down what was really on my mind.

It’s not fun stuff, but we are talking about horror. Which the dictionary defines as “an intense feeling of fear or shock.”

I’m a child, standing in a line with my friends. The boy at the front of the line enters a room and closes the door. Moments later, we hear him being beaten. Sometimes the boy screams, sometimes he cries.

Crying is better. They don’t like it when you scream.

The beating will be extremely painful — I know because this has happened before, many times. Standing in the line, waiting for my turn, is torture. I used to crowd near the end, but I’ve learned that that makes it far worse.

Physical abuse. Mental abuse. Emotional abuse. Sexual abuse. I endure it all . . . for years. I used to be a talkative kid, but saying things without thinking gets me into trouble, so I become stoic, mute. I frequently go entire days speaking less than ten words.

As bad as everything else is, this unconditional domination is worse.

I endure all of this for over a dozen years . . . until I am old enough to leave.

So . . . what’s my point? Simply this: Having grown up this way, why in the world would I read horror? Why would I choose to publish, edit, and write horror?

I’m honestly not sure that I have the answer. But there are some things that occur to me, and perhaps what is true for me may be true for others.

Maybe one reason I read horror is that it makes me feel less alone. These people have had it bad, too. They’ve gone through terrible things. Yes, they are fictional characters . . . but it still helps somehow. Because of what I’ve been through, I feel broken, and in horror stories, I find broken people like me. It’s comforting.

Like I said, I don’t have the answers. I’m thinking out loud.

It isn’t easy for me to write about such intensely personal things. But in light of how I grew up, why I read horror and why I chose it as a profession is something I’ve been asking myself lately.

In the 2001 film Vanilla Sky, one of the main characters tells another that “the sweet is never as sweet without the sour . . . and I know the sour.” He meant that he’d had a hard life, so when good things happened to him, he appreciated them more.

Perhaps when I read a horror story, on some level I feel that — yikes! — that guy has had an even harder life than me. There’s some perspective for you, bud.

And perhaps if someone has had a good life, horror gives them a contrast. Bad day at the office? Well, at least zombies aren’t after you. Behind on your bills? Could be worse: You could be dealing with the end of the world. Maybe your life isn’t so bad, after all.

A contrast. The old “I cried because I had no shoes until I met a man who had no feet” line of thinking.

Or maybe, just maybe, I — and you — enjoy reading horror because it’s manageable. If it gets to be too much, we can close the book. Unlike real life, it can’t touch us.

After all, there are terrors in real life that are every bit as ghastly as anything you’ll find in a horror story. There are thousands of nuclear weapons on Earth. At any one time, there are between thirty-five and fifty serial killers in the United States. Over two million children a year die as a result of hunger-related causes. Children.

And there is more. Much more. As we all know. As individuals, we can’t do anything about those terrors, so we try not to think about them.

Sometimes, though, a good horror story isn’t just chilling — it’s also thrilling. We enjoy it not because it frightens us, but because it suggests that there is more to life than what appears on the surface. If you’re reading a ghost story — even a scary one — there’s another message there too, isn’t there? It says that after this life, there is more. There’s another adventure beyond the veil. In the story, at least.

It’s comforting to pretend that it’s so. And that’s what we’re doing when we read a book: pretending.

I recently published The Sea of Ash, by the ultra-talented Scott Thomas. There are some scary moments in that novella, to be sure. It certainly classifies as a horror story. But at the same time, when I read it I found myself wishing (hoping?) that life could be more like that. That there could be more to explore than what we currently understand. That perhaps behind a boarded door I walk by every day, mysteries await. Or around the corner, another world.

We’re explorers. We’re always searching for more. Maybe the reason why we love cemeteries and scary stories and Halloween is less about being scared, and more about a yearning to discover unknown realms.

Or maybe I’m wrong about all of it. I can’t know your reasons for reading horror, and apparently I can only guess at mine. In answer to the question of why he writes horror, Stephen King wrote (in one of my favorite forewords to any book, Night Shift): “Why do you assume I have a choice?”

A question that haunts me sometimes is: Who would I be if those awful things hadn’t happened to me? What would I be doing now? Almost on the spur of the moment, my parents made the decision to move a thousand miles to join a cult. Everything that happened afterward hinged on that one choice.

Would I be working in the small press as a horror editor and publisher? Is that why I read horror? Did that one decision guarantee that I would be forever haunted by darkness?

I don’t know. I will never know.

So. Why do you read horror? 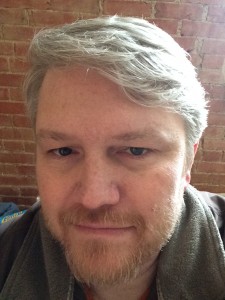 Mike Davis is the founder and editor of The Lovecraft eZine. He lives in Texas with his wife and son, one dog, five cats, and lots and lots of books.