The H Word: When Danger Is Announced

In my final year of grad school, I rented a one-room apartment, and the cheeky geography of the sidewalks and hills funneled rain directly to my stoop. The first time my home flooded, it was two a.m. A puddle swelled from the crack under my front door and expanded across the entire wooden floor.

The next big storm was thoughtful enough to happen in the daytime. I used my phone to record the inevitable flood for my landlady. This is how the video goes:

I film my stoop. It’s bright outside, the clouds already scattering, but water threatens to spill across the threshold of my open door.

I tentatively step outside, filming my foot as it sinks to the ankle. Heavy raindrops fall. Plip plip. Faraway thunder rumbles. I pull my foot back inside and

an intense flash of white.

I leap back, but the lightning bolt is already gone before I land. Later, I’ll find char marks just thirty feet away from the apartment. It is the first time I’ve been so close to electrocution, but my body thrums with a familiar fear.

It’s that part of the horror movie when the tension is taut enough to snap with Norman Bates’ dullest knife. Character A is kneeling to peek under the bed or approaching a dark room or rounding a corner. Maybe the eerie background music builds to a crescendo, or maybe it’s quiet: too quiet. You know what’s coming. This is a horror movie, after all, and it’s been awhile since the last fright. Your friend covers his eyes but peeks through his fingers; he also knows what’s coming, and he hates that the knowledge just makes it worse. Character A lifts the bed skirt or steps through the doorway or peeks around the corner, and—

With the speed of a lightning strike, something pops onto the screen, accompanied by a harsh, loud pulse of sound. All but the most stoic movie watchers flinch. Love them or hate them, jump scares are a prominent tool of audio and visual horror. They exploit our startle response, the run-now-think-later physiological mechanism that protects Earthlings from sudden danger.

That said, there’s a second type of fear-inducing technique that’s gradual, cumulative, and a hallmark of great horror. It builds brick by brick, entombing us in growing dread until the terrible revelation of the final brick (For the love of God, Montresor!) The foreshadowed scare exploits our instinct to consciously or subconsciously notice little details about the world that hint at wrongness, at danger. As these warning signs accumulate, our sense of dread builds.

When I was an intern in Massachusetts, the program housed me with another twenty-something woman in a drafty, four-bedroom house near the sea. As our first order of business, Roomie and I explored the property inside and out. The front porch overlooked a quiet road, high dunes, and a long beach that few tourists ever visited. The back door opened to a dense forest of trees with waxy leaves. Near the forest, we found a ring of stones filled with charred wood, somebody’s makeshift fire pit. There was also a crawl space under the house, the highest I’d ever seen. I shone my keychain flashlight into the dim maze of cobwebs, wooden beams, and cement blocks. To my horror, somebody had discarded empty soda cans in the crawlspace.

“We need to recycle them,” Roomie said. She and I went spelunking in the three-foot-high space on our knees and elbows, collecting cans. In our defense, we were environmental science interns.

On December 25, 2018, a trailer for the movie Us (Jordan Peele, writer/director) was released. As of this essay, the official trailer has almost 15 million views on YouTube; at least eight of those are mine. I rarely watch trailers more than once, but the preview of Us fascinated and unsettled me more profoundly than most full-length horror movies. I was compelled to watch the trailer a second, third, fourth, fifth, sixth, seventh, and eighth time all in the same night, as if spellbound. Every viewing helped elucidate the source of my fascination. The two-minute-and-thirty-second trailer is densely seeded with imagery that hints at strangeness and danger. Although it took effort for me to consciously notice all the hints, I suspect that I subconsciously recognized many of them during viewing number one. How else can I explain the way the trailer made me feel? On high alert, like a bird in a cat café, and intent to uncover the source of my fear.

All of my favorite horror books are masters of the foreshadowed scare and consequently linger in my thoughts long after I finish the final page. I revisit the character behavior, dialogue, and events in my mind, making an inventory of clues. Good horror haunts the reader like an unfinished task, and it’s a joy to search for every instance of foreshadowing. Wolves play-fight when they are young to develop social and survival skills. Maybe humans enjoy analyzing imaginary danger in order to prepare for the real thing.

Not long after we cleaned the crawlspace, my Roomie took a quick vacation, leaving me alone for the weekend. That Saturday, after a walk along the beach, I returned to the seaside house and settled in the dining room, which was surrounded by windows. The house had bad reception and zero Wi-Fi, so I’d rented a DVD of Lake Mungo (Joel Anderson, writer/director) for entertainment. In my bathing suit, I watched the movie with a growing sense of dread. Like many of my favorite horror works, Lake Mungo is wonderfully layered. The structure and subtle clues of the movie support a sinister interpretation of the plot that’s easy to miss in the first viewing. Furthermore, (spoiler) a replay montage before the end credits reveals a ghostly figure lurking throughout unassuming scenes.

As the credits rolled down my laptop screen, I looked up. There was a man standing in the woods. Looking at me. How long had he been looking at me? He ducked out of sight when we made eye contact, and I quickly drew the curtains.

Just when I felt safe in the now-dark cave of a house, there was a knock at the front door.

I looked at my cell phone (no signal)—

—and shouted through the door, “What?”

The stranger responded, “I’m a friend of Sam. Can I come in?”

If he’d been watching me, he knew I was alone.

The stranger lingered a moment longer before ambling up the driveway; I watched him leave from the peephole. Not much else to say about that incident, except for one thing.

Weeks later, I peeked at the crawlspace under the house. Nothing lunged at me with a screech, but I witnessed something even creepier: there were new cans scattered among the beams.

Sometimes, danger jumps from the shadows (or stormy sky).

Other times, it announces itself (e.g., through soda cans in strange places).

Good horror fully exploits our instincts to survive both inevitabilities. 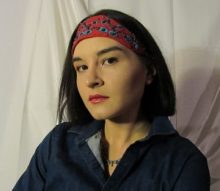 Darcie Little Badger is a Lipan Apache geoscientist and writer with a PhD in Oceanography. Darcie’s debut novel, Elatsoe, will publish with Levine Querido in fall 2020. Her short fiction, nonfiction and comics have appeared in multiple places, including Take the Mic: Fictional Stories of Everyday Resistance, Strange Horizons, The Dark, Love Beyond Body Space and Time, and Moonshot: the Indigenous Comics Collection (volumes 2 and 3). She co-writes Strangelands, an ongoing comic series in the Humanoids H1 shared superhero universe, with Magdalene Visaggio.