Although my parents might deny allowing their young daughter to see movies such as The Exorcist, The Omen, and many of Stephen King’s adapted books (Cujo, Carrie, Christine), images and scenes from those films have been indelibly burned into my memory like the starkest nightmares. And I did get nightmares immediately after watching these and other horror movies: the rabid dog nightmare, the demon child nightmare, the attacking birds nightmare, the girl with blood running down her face nightmare. You would think that such experiences would have turned me off of horror early on, because who likes to be frightened to the point that it chases you into dreams, a la Freddy Krueger?

But in tracing back my influences as a writer, I was a little surprised to discover that horror has been an enduring staple of my creative life. Though I have been published primarily in science fiction and fantasy (thanks to an early love of Star Wars and the The Chronicles of Narnia, which carries through to this day), the middle grade and YA books that I dove into as a child were in the suspense and horror genres—and romance. I grew out of romance, but still enjoy horror as an adult, and my focus in the genre hasn’t deviated much. I was never into slasher films, or any kind of gore, but ghost stories and Hitchcock-style psychological horror? I still love those, and I suspect one of the keys to that is in the idea that horror stimulates the problem solving parts of the brain. In 2010, Dr. Thomas Straube conducted brain scan research where forty subjects viewed threatening and neutral scenes from scary movies, and the results showed activity in the less obvious regions of the brain: the visual cortex, insular cortex (associated with self-awareness), thalamus, and dorsal medial prefontal cortex, the last of which is associated with planning and problem solving.

Though not as obvious an element as in mysteries, all storytelling utilizes an aspect of problem solving for the reader or viewer. How will the couple get together (for romance)? How will the heroine save the galaxy (for science fiction)? While stories in general also offer some examination of a protagonist’s psychological state, the extreme circumstances depicted in horror tend to test the characters in unique ways—forcing them, and thus the audience, to confront deep-seated fears that might even reside in the unconscious mind. The horror filmmaker or writer who can tap into these unspoken and often avoided fears can force the audience on some level to untangle the reasons why and how they are reacting so viscerally to the narrative. Perhaps more in horror than any other genre, the audience asks themselves: How would I handle that situation? How would I get out of the dark cabin, zombie-infested building, or vampire’s lair?

There are many psychological theories as to why people could be attracted to horror. Some like the “snuggle effect” (being scared, and the adrenaline or excitation of it encourages a positive response after, a sense of safety); some enjoy the illicit nature of viewing often taboo images; yet others (mostly unconsciously) enjoy the vicarious experience from the safety of a movie theater or living room (ideally surrounded by others). In his essay, “Why We Crave Horror Movies,” Stephen King surmised that it might be our common insanity and the ability to purge that insanity vicariously that draws us to horror—and who can debate that? We’re all a little mad here. If there is any sort of consensus as to the ongoing attraction to horror, it is that there isn’t just one reason. We sit through visceral fear and disgust, even if it is at a certain distance, because the human brain is complicated and often influenced by the unconscious (particularly if you subscribe to Jungian psychology).

However, there is general agreement that having that distance is essential. To see someone brutally killed in real life is different from seeing it on a screen, even if our emotional responses are on the same spectrum, and the visual or experience of it can still affect us on both conscious and unconscious levels (like in nightmares). In 1994, a study on disgust conducted by Haidt, McCauley, and Rozin found—not surprisingly—that many of their subjects could not make it through documentary footage showing real life horrors, such as animals being brutalized. Yet these same students wouldn’t think twice about going to a horror movie and enjoying themselves. There is a psychological distance in viewing a movie where you are cognizant of the fact those are actors on the screen (some of whom we might even recognize from other works), and that it took a team of filmmakers to construct what you are seeing. Add to that a musical score, the possibility of dark humor, and a certain level of absurdity to the action, and our brains engage with fiction in a different way than with real life. Watching horror offers us such a full experience that it is similar to lucid dreaming since we can control, to some extent, our interaction with it (by shutting our eyes, getting up to leave, or making a joke to our friends in order to diffuse tension). So even if we are thoroughly drawn into a film experience, we are always aware on some level that it is a safe experience.

The kinds of horror I gravitate toward from such filmmakers as Guillermo del Toro and Alfred Hitchcock, and stories by Stephen King, present to me as a puzzle. Rather than cheap shocks or an overabundance of gore, these storytellers take you on a journey that often reflects and examines our inner world and our society. This idea goes hand in hand with a 2013 article in Vulture by Warren Ellis, where he states that violence in fiction (and by association, horror films) is a way for us to “de-fang our monsters,” an attempt to understand our darker natures, and that we do ourselves a disservice if we do not. He wrote:

“. . . it seems to me that we don’t begin to understand something until we talk honestly and directly about it. Difficult topics must be engaged with, and in the way that fiction invites us to engage but numbing news-porn deliberately does not, because news wants us only to witness and have our buttons pushed, and denies greater emotional and intellectual immersion. The news doesn’t want us to think, only to react, like plants.”

My fascination with horror—whether it’s a good old-fashioned ghost story in the vein of The Others, a religious and cultural examination as in The Witch, or the common theme of the monsters among us, as in Pan’s Labyrinth or The Shape of Water—endures precisely because the best in the genre hold up a mirror to our own worlds, both interior and exterior. Once we see ourselves in the characters and their situations, we are no longer just passive observers who can easily brush aside what the experience makes us feel, how it encourages us to think and analyze. Our perception is a crucial element in our interaction with The Others, just as our ideas and reactions toward the concept of “the other” dictates how we empathize (or not) with the creature, and thus the love story, in The Shape of Water. When we witness violence enacted upon the “monster,” it makes us question our own possible reaction to the “others” in our own society. Del Toro draws a direct correlation between the seemingly obvious monster (the creature) and the subtle, hidden monster of Michael Shannon’s character. An effective horror story pushes us to engage with it; that is the thrill, satisfaction, and fear of diving into a horror narrative. We are confronted.

All of speculative fiction, whether in literature or film, is intrinsically an art of metaphor, and perhaps it is no more obvious than in horror. Our world might not be overrun by zombies, but the consistent obsession with the undead in our popular culture would suggest that these stories are telling us something about ourselves, whether on a personal or societal level. I know that no matter how many horror movies or TV shows follow me into my dreams, or make me sleep with the light on for a few nights even as an adult, I keep going back to these stories because they expose some truths about our human nature. As a writer and human being, I feel it’s my personal responsibility never to shy away from these truths—especially the unpleasant ones. 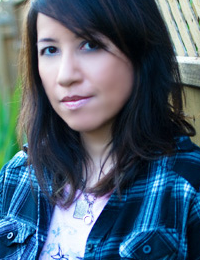 Karin was born in South America, grew up in Canada, and worked in the Arctic. Her first novel Warchild won the 2001 Warner Aspect First Novel Contest. Both Warchild (2002) and her third novel Cagebird (2005) were finalists for the Philip K. Dick Award. Cagebird won the Prix Aurora Award in 2006 for Best Long-Form Work in English. Her books have been translated into French, Hebrew, and Japanese, and her short stories have appeared in anthologies edited by Nalo Hopkinson, John Joseph Adams, Jonathan Strahan and Ann VanderMeer. Her fantasy novel, The Gaslight Dogs, was published through Orbit Books USA.She can be found on twitter @karinlow.