The H Word: The Melancholy Beauty of Terror

For the longest time, I’d searched for a proper definition of horror. That whole, “defined by emotional response” never sat well for me, and felt lacking as a descriptor. Mostly because people think that emotion should be fear or fright, but at the same time the word horror doesn’t automatically mean fear, does it? Something can be horrible, and yet not scary.

Add to the fact that some of the best horror digs in under the skin and does something else, something far more disturbing than simple fear. Maybe it’s another emotion, then. Maybe it’s disgust? But at the same time, what of the gothic? What of the creeping dread of classic horror? Stories where there may not be any disgust at all, but only a bright terror that changes you? Not fear per se, but rather this sense of wrongness in the world.

So, is horror as a genre indescribable? Is it something that can’t be boxed up and placed into a simple descriptor?

I was never a fan of the whole, “It’s like pornography, I’ll know it when I see it” definition of the genre. I’ve always felt that this wasn’t helpful to anyone at all, and allowed the person making the statement to define horror according to their own personal whims. That’s great for a singular reader, but as a classification for a genre? Not so much.

For what could possibly combine the classic with the contemporary? How could one match splatter punk and 80’s sleaze horror with MR James and Machen? How do Poe and Hitchcock fit into all of this? Is Silence of the Lambs horror? So many people seem to think so, and why is that? What could possibly unite all of these things together?

And then, dear reader, it struck me. Peering over each and every text, through Poe to Kathe Koja to Stephen King to Clive Barker. Even from Daphne du Maurier to Shirley Jackson to Kelly Link to Laird Barron and beyond. Machen? Yes. Charlotte Perkins Gilman? Most certainly.

Death was at the center of it all, death like a beating heart in the wooly darkness, death, death, death. Horror at its core is all about death. The fear of death, the celebration of death, laughing at death, and loving death. Even when the horror in a story is caused by the unknown and uncanny, it’s still about death, for what greater unknown is there than the pale lands beyond the veil? And what’s more uncanny than the uncanny valley of a corpse? Death makes haunted dolls of us all.

Horror finds a melancholy beauty in that terror, a bittersweet kind of thing, embracing the rot and ruin of the world. Look on my Works, Ye mighty and despair! For we are all transient and suffering in the heart of a dying universe. Entropy slowly eroding and decaying, sending us into a long, slow death spiral with no escape. Horror embraces this death, shoves death in our faces, forces us to consider it in all of its facets and discovers splendor in the transient nature of time.

And horror does not sugar coat our impending demise. It does not lighten the blow, or offer hope, or give us an escape hatch to the great beyond. In horror, death carries weight, fear carries weight, and that weight results in terror and beauty. This is how we can transcend the fear, by confronting it and not shying away, but instead going through the fire and out into the other side.

That other side, where only unknown shadows wait beyond dying, with a hoarse whisper of rot and echoes.

But horror shows us that there is something to this whole experience, to these fears and these moments and the ache and pain of being alive. Here is a truth that no other form of media can speak, that no other genre can claim to get as right as the horror genre gets right.

That we were all real once upon a time, and that we ached, and we were hurt, and once loved with a burning love. That this bit of dirt here contained the bones of a human, and they lived. They lived. Through pain and sorrow and memory and night, they lived. Even if for only a short while, and even though they would be forgotten, they lived. And in the end, that quick death and long forgotten hours made it somehow worthwhile. And that the shortness of our lives added to the fleeting beauty of the universe.

That is how I define horror as a genre, love it or leave it, ignore it or press it against your flesh. Death is the crux and crucible of it all, for better or for worse. Death and the melancholy terror it brings. See the loveliness in despair? See the gorgeous horror that awaits us all? There is a tantalizing call to shake off this skin and bone and ache of living. And horror just simply asks what if . . .

What if we were to answer that call? Oh, how beautiful that would be. 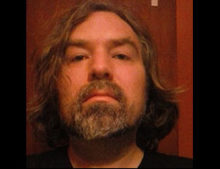