The H Word: The Charm of the Old-Fashioned Ghost Story

After the real estate agent took my husband and myself on the grand tour of the 1870’s Italianate Revival house, I asked the owner, before inquiring about taxes, or pipes, or the age of the roof was: Is it haunted? The owner, a classic silver-haired little old lady type, familiar to anyone who has read a ghost story or two, said “Yes. Ruby’s still here.” Of course, we bought the house.

Neither my husband nor I are particularly “sensitive,” so if our house was haunted, at first, we remained blissfully unaware, ascribing any bumps in the night to mice, pervasive cold spots to the lack of insulation and the double-sashed windows that rattle in their frames when the wind blows. When the locals at my hairdresser or the grocery store heard I had moved into “The McLaren Place,” inevitably they asked, almost in a whisper, “Is it haunted? I heard that it was haunted.” As soon as they saw I wasn’t going to scoff at them or get angry at the impugning of my fine old house’s reputation, they would tell me the stories they had heard about the spectres I shared my new home with. Friends of ours—city dwellers who live in shiny glass-fronted condominiums, or hipster rescued loft spaces with exposed brick walls and rough wooden floors inevitably asked: “Is it haunted? Have you seen a ghost yet?” Though my friends asked with a smile, it was in deadly earnest that they then leaned forward and shared their own stories, their personal ghosts.

After rummaging in the town’s archives, listening to the local whisperings, and experiencing a few unsettling and not easily explainable incidents in the house, I pieced together my own ghost story. It is a lovely ghost story of the type that has its roots in domestic history, is genteel, primarily concerned with the interchange between the dead and the living, and exists almost exclusively to be shared. In other words, a “traditional” ghost story to exchange around the metaphorical fireside.

Ghost stories have always been a part of the human condition. The earliest ghost stories were essentially morality plays. An individual who sinned or transgressed the rules set by society, the gods, or God was sent to warn the living of their fate if they should follow in the unhappy shade’s footsteps. The spirit appeared as an image of suffering, scared the daylights out of whoever encountered them, and disappeared, leaving the beholder sufficiently frightened to presumably mend their wicked ways. Not very satisfying as a story.

Later stories began to include what are known as “residual hauntings,” leftover impressions of traumatic events. Battles still heard long after they were won or lost, anniversaries of hangings or murders that brought the players out to re-enact them, but there was still no interaction between the two worlds. The dead went on with their mummery, and the living watched helplessly or locked themselves away until the show was over, and everyone could get on with the business of life. Like witnessing a disaster, the stories of these supernatural events made one think briefly about mortality, gave a momentary thrill of fear, but ultimately had only the most minute of personal meaning. Move along, nothing to see here.

It was the idea of “intelligent hauntings,” apparitions who could interact with the living, feel emotions, linger or leave as they saw fit, that gave rise to what we consider the traditional ghost story. With this development, ghost stories moved away from being an illustration of a standard punishment for transgression, or re-enactments of grim historical acts, to telling the story of an individual. Now spectres could manipulate the living in ways they never could before. They could ask for vengeance, or solace, they could drive people away from places they wish left undisturbed or draw them to their haunts, they could call up resonances with the living’s own experiences. The bond between the living and the dead was established, understood as one that was a two-way street. The possibilities from a storytelling point of view were endless.

This type of ghost story, the kind we view as traditional, reached its apotheosis in the Victorian era when all the tropes were established: where the stories were usually set (manor house, country house, vicarage), the acceptable limitations of interaction (pity—yes, love, especially sexual love—no), even where they were best told (around the fire Christmas Eve, men’s paneled club rooms while sipping brandy, chambers at a venerable educational institution—Oxford or Cambridge, preferably).

The ghosts in these stories are both strange and familiar. They have been where we have not, and they have come back. They have come back, because despite the promised delights of death, whether paradise or oblivion, we, the living, are still the most important things in their world. Even the malevolent spectres, that hated while alive, and continue to hate after death, cannot and will not keep away; their business is still earthly. Their appearance is often dreadful; they are dressed in their grave clothes, or their aspect is one of a decaying corporal body, but after all, they are were human. Telling the stories of how we have interacted with these entities—what they wanted, what the outcome was, is, as really all stories are—an elevated form of gossip. And like gossip, we are alternately a bit ashamed to ask, and at the same time dying to hear the full account.

Therein lies the charm of the old-fashioned ghost story. Boundaries have been set, both through the inherent characteristics of the story type, domesticity, individuality, communal sharing, and through the Victorian tropes which still hold sway. Within these limitations, both listener/reader and teller/writer can safely call down the dead, interact with them, and still be assured that the natural laws governing life and death are not breached. We can explore the nature of regret, love, hate, obsession, revenge; all the great dramas of life with the distancing factor of a premise that is sometimes dismissed, sometimes fervently believed, but almost always hoped for: that of life after death. These are the tales we need to hear when the horrors of the world are no longer following any known rules, when the social contract has been broken, when we feel that we are no longer individually able to influence our surroundings or direct the arc of our lives. Stories we want to hear preferably on a dark night, when rain lashes the window panes, and there is no light but a few candles guttering on the table beside the teller; we listen, understanding how the dead love us, and we love the dead, and that is something that will never change. 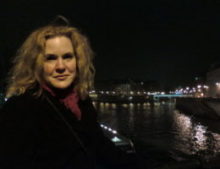 Halli Villegas is the author of three collections of poetry (Red Promises, In the Silence Absence Makes, and The Human Cannonball). Her book of ghost stories The Hairwreath and Other Stories came out in fall 2010 with Chizine Publications. She is the co-editor of the anthologies Imaginarium: The Best Canadian Speculative Writing 2012 and In the Dark: Tales of the Supernatural. Her genre work has appeared in anthologies that include Cli-Fi: Canadian Tales of Climate Change, Chilling Tales 2, The White Collar Anthology, Girls Who Bite Back, and Mammoth Best New Horror, 25th anniversary edition. She is a professor at Georgian College in Barrie, Ontario, and also runs an editing and manuscript consulting business called In the Write Direction.