There is too much about the animal that attracts us. They have abilities and priorities we don’t have. While many shapeshifters are portrayed as bestial and mindless when in their animal form, animals have other instincts that make them terrifying, cunning, and anything but mindless: territorialism, pack dynamics, and mating urges. These traits are accentuated by the superior senses and abilities (climbing, swimming, flying) that animals have. Superior sight allows the beast to watch for interlopers; superior smell allows the beast to sniff out others of their kind and where they are in their cycle; superior hearing allows the beast to hear the beating of the prey’s heart. All of this excites and frightens the reader, drawing them deeper into the story.

However, there’s a rich world of shapeshifting creatures out there to create and explore that are not werewolves. Some of the more interesting that have already been done include: JK Rowling’s Harry Potter animagus shifters; Laurel K. Hamilton’s Anita Blake series’ numerous non-werewolf shifters including swanmanes and wererats; Seanan McGuire’s October Daye series’ roane, selkies, Gean-Cannah; and M.L. Brennan’s Generation V series’ kitsunes and were-bears. Every shifting legend of myth, and every creature in the animal kingdom, has something different to offer.

When I took over the Beast Within anthology series (Predator & Prey, Oceans Unleashed, Gears & Growls) as the editor, I specifically looked for non-werewolf stories because I wanted something other than the usual. I wanted something I had not read before and I got it. For Predator & Prey, I received an amazing were-buffalo story by Kenneth Mark Hoover that astounded me. For Oceans Unleashed, I was treated to a were-jellyfish story from Nisi Shawl and a were-horseshoe crab story from Wendy N. Wagner. Both of these stories left me chilled. In Gears & Growls, it was a multi-shapeshifter story from Caren Gussoff that has refused to leave my mind years later.

With all of these stories, I don’t think they would have had the same impact if they had been your standard werewolf shifter. The unusual shifters made the story. They brought forth a different line of thought that I appreciated.

Prey animals have a different perspective. While they do run on instinct, they tend to work more towards the good of the whole—the herd—rather than the individual. They also have migratory instincts, and some have hive mind instincts. The needs of the herd outweigh the needs of the one. There are acceptable sacrifices—usually in the old, the infirm, or the very young. This shifts the priority and point of view of the non-predator shapeshifter, thus influencing the story into a non-standard shapeshifter path.

Rather than focusing on the fight or holding territory, the story can focus on becoming part of the whole or bringing another into the herd—or what happens when one is culled from the herd. This isn’t to say that non-predatory shapeshifters aren’t fierce. They are, but they are fierce for different reasons. The instinct to migrate can outweigh the need of safety. The protection of the herd can force the shifter into the hardest choice of their lives. It all depends on the focus and point of view of the animal the shifter becomes.

Shapeshifters will always fascinate and entertain. As readers and writers, we like to explore the mystery of becoming something other than human. We want to know what it is to become a primal force, running on instinct rather than reason. We like the sexiness of it, the permissive loss of control, and the violence of being the animal. Shifting from human to animal is the perfect escapism for the stresses of modern life and allows us all to put down the rational, reasoning restraints of civilization.

I love shapeshifter stories, including werewolves. I don’t see them going away anytime soon. But I want to encourage authors to look beyond the wolf and into the other creatures around us. 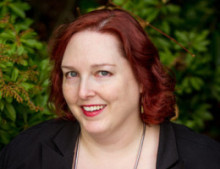 Jennifer Brozek is a Hugo Award-nominated editor and an award-winning author. She has worked in the publishing industry since 2004. With the number of edited anthologies, fiction sales, RPG books, and nonfiction books under her belt, Jennifer is often considered a Renaissance woman, but she prefers to be known as a wordslinger and optimist. Read more about her at www.jenniferbrozek.com or follow her on Twitter: @JenniferBrozek.