In 2017 my phone rang, I picked it up, there was some fumbling on the other end and then a laughing female voice said, “Sorry, I dropped my headset. Are you still there?”

She laughed again, “I’m just having one of those days. Anyhoo, do you mind if we go over that credit card issue you emailed us about again?”

It took me a minute to realize she was a recording, one that was designed to cover the pause between when the robo-dialer heard my voice and when its software was activated by pretending to drop its headset; one with volume and EQ levels that sounded natural on an earpiece, one that used social engineering to phish for my financial information. A chill of paranoia wrapped my brain in Icy Hot. Trapped on a hard drive somewhere was this splinter of a human personality designed to make me lower my guard. Compared to that, The Conjuring is downright adorable.

That a fabricated personality could trick me, even for a second, into mistaking it for real is the least of my problems. Because while I wasn’t looking, reality was colonized by an entire fabricated world, governed by the tenets of horror.

When I was a kid, conspiracy theories were my safe space. I had a couple of books that collected the addresses of different groups and I’d sit in my room, writing away for literature from UFO cults like Unarius and the Raelians. The United States Postal Service was a cornucopia of crackpot conspiracies, disgorging pamphlets from Minnesota’s Warlords of Satan, Christian comics from Jack Chick, apocalyptic photocopied newsletters like The Crystal Ball, catalogs for underground books from Loompanics Press, MK-Ultra exposés from Finland, shocking revelations of CIA weather control photocopied by whistleblowers on company time.

I lost touch with the conspiracy community around Y2K, but in 2016 I checked back in to research my new book and walked into a horror movie, already in progress. The boards were full of talk about Pizzagate, bots, groomers, Beta alters, QAnon, and birthers. Nothing was funny anymore. Everyone felt out of control of their lives, they felt angry, they felt like drones enslaved by the one percent, and freedom wasn’t an ideal but a delusion for the sheeple. Basic human compassion for murdered children was snuffed out beneath talk of crisis actors and false flag operations. Individuals in the grip of psychotic breaks channeled their desperation into discussions of gangstalking. It’s one thing to say that people who believe the president should be impeached live in an online echo chamber. It’s another thing to see people who believe that hundreds of strangers are coordinating air traffic patterns, television broadcasts, and random street encounters in an effort to gaslight them into killing themselves getting those fantasies validated in an online echo chamber.

Horror is the only fictional genre that claims to be true, going all the way back to at least The Castle of Otranto in 1764, which is supposedly based on the translation of a 1529 manuscript recounting a very unlucky family’s history. “The Turn of the Screw” is positioned as a true story that happened to a friend, and Dracula pushes against the boundaries of the novel with its fake transcripts, letters, and diary entries. Some folks still swear The Blair Witch Project was a documentary, or at least inspired by true events, or at least kind of based on an urban legend that was real. Honest.

If horror fiction aspires to be indistinguishable from reality, then horror’s greatest achievement is the digital facsimile of reality that exists parallel to our analog world. Here, crowdsourced narratives, steeped in fear, despair, and paranoia have become viable alternatives to the truth. Fiction comforts us with a pleasing narrative neatness and by satisfying emotional needs left unfulfilled by reality, and now fictional devices have become weapons of mass delusion. Reporters are taught to “craft a narrative,” while PR firms try to “control the story.” Movies aspire to “worldbuild.”

Real events and personalities are cut and pasted into fictional contexts to augment fiction with the grit of reality. Real events are burnished with the pleasing symmetry of narrative. Mentions of black sites and medical studies are sprinkled over fictional stories of mad scientists and first contact until these fictional conspiracies sound real. Catfishing, a form of weaponized storytelling in which a completely artificial online personality is cobbled together out of social media accounts and emails to con innocent people out of their money and their dignity, is what this looks like on a personal level. Pizzagate, the anti-vaxxing movement, and the reduction of global warming into a war of dueling narratives is what this looks like on a global scale.

It’s been happening for decades. A totally fictional story about weapons of mass destruction led to the invasion of Iraq in 2003. Aum Shinrikyo cultists gassed the Tokyo subway system because they believed their leader had comic book superpowers. Just as some engineers are so fully invested in one fictional narrative, Star Trek, that it inspired them to invent cell phones and QuickTime, Timothy McVeigh’s belief in another fictional narrative, The Turner Diaries, inspired him to blow up the Alfred P. Murrah Federal Building in Oklahoma City.

Conspiracy theories have been around for centuries, but never before has the technology existed to let this fiction mesh so seamlessly with real life. Recently, Congressional representatives signed a letter stating the Muslim Brotherhood had infiltrated Washington, D.C. It hasn’t. Two congressmen in 2017 talked about the dangers of One World Government, something I only used to see in homemade pamphlets duplicated on color copiers. In the 2016 election, presidential candidates blamed the country’s problems on vast right-wing conspiracies, on vaccines, on illegal immigrants, on the Deep State. All fiction.

The desired emotional states this parallel fictional world seeks to produce are pain, anger, alienation, and despair—the horror palette. But the old metaphors we have—vampires, zombies, ghosts—don’t feel strong enough to counteract what has become the culmination of a few thousand years of horror fiction: an alternate, hopeless world that exists over, around, and beside this one. We’ve lost control of our creation, and while it runs amuck we play with our toys on the beach, not noticing how deep and treacherous the sea beside us has become. 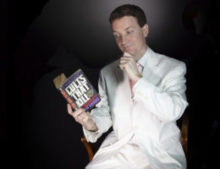 Grady Hendrix is a novelist and screenwriter living in New York City. He’s the author of Horrorstör, My Best Friend’s Exorcism, and the Stoker-Award-winning history of the horror paperback boom of the Seventies and Eighties, Paperbacks from Hell. His latest book is We Sold Our Souls, a paranoia-inflected, heavy metal riff on the Faust legend, due out in September from Quirk Books.