Today’s mail brought the current issue of Famous Monsters of Filmland, which I ordered because S. T. Joshi wrote two articles for it. The issue amazed me, because none of the articles cover film adaptations of Lovecraft’s Works. Two articles (“Lovecraft’s Acolytes,” by Robert M. Price and “The New Mythos Writers,” by S. T. Joshi) discuss those writers who were influenced by his fiction and have written tales therein, from the time that Lovecraft was alive to the present day; and one article (“The Language of Lovecraft,” by Holly Interlandi) looks at Lovecraft’s prose style and sentence structure! The Lovecraft influence thrives today, as can be seen from such amazing anthologies as Lovecraft Unbound (edited by Ellen Datlow), Black Wings (aka Black Wings of Cthulhu, edited by S. T. Joshi), New Cthulhu: The Recent Weird (edited by Paula Guran) and The Book of Cthulhu (edited by Ross E. Lockhart).

When we think of Lovecraftian horror, or the Lovecraft Mythos (as it exists in Lovecraft’s works alone), we need to differentiate those stories from what has come to be called the Cthulhu Mythos, a name invented by August Derleth. Lovecraftian horror incorporates aspects of the Cthulhu Mythos (which oozed forth from Lovecraft’s influence), but Lovecraft’s horror fiction is much more than cosmic entities that filter to our planet and corrupt our dreams and sanity. Indeed, Datlow and Joshi, in their anthologies, requested that Cthulhu Mythos tropes not be a feature of submitted stories. Black Wings, for this reason, has a carefully chosen subtitle: “New Tales of Lovecraftian Horror.” The word “new” is as significant as the word “Lovecraftian.” It seems astonishing to realize that this sub-genre came into being in the distant 1920s, around the time when radio was becoming a new entertainment medium. As he discovered himself as a writer, Lovecraft was touched by many influences. Poe was paramount; Dunsany and the Decadents tugged his interest for a moment; and the burgeoning new genre that has come to be known as science fiction began to color Lovecraft’s imagination, perhaps in part because he was beginning to contemplate writing for the new SF pulp magazines due to sudden and repeated rejections of tales submitted to his regular publication outlet, Weird Tales. Both “At the Mountains of Madness” and “The Shadow out of Time” were initially published in science fiction pulp zines (submitted to those zines not by HPL but by friends to whom he had loaned copies of his stories).

One of the fannish criticisms aimed at Datlow’s excellent Lovecraft Unbound is, “These stories ain’t Lovecraftian!” So what is Lovecraftian horror? Some of those who deride this sub-genre may evoke a sentiment voiced in “The Dunwich Horror”: “As a foulness shall ye know Them.” This was actually the opinion of Joshi until, as an editor hunting for new books to be published by Hippocampus Press and other houses, he discovered that Cthulhu Mythos books sell rather well. Joshi asks this very question in his introduction to Black Wings II: “What defines a ‘Lovecraftian’ story? This seemingly simple question is in fact full of ambiguities, perplexities, and paradoxes, for the term could encompass everything from the most slavish of pastiches that seek (usually unsuccessfully) to mimic Lovecraft’s dense and flamboyant prose . . .” The first and foremost acolyte to attempt this nameless replication of Lovecraft’s style was August Derleth, but he did it for a very specific reason. Derleth fell under the shadow of Lovecraft while the older writer still lived, and he sent HPL his early attempts at writing Lovecraftian horror. Whatever may be said about Derleth’s success as a Mythos writer, his initial keen sincerity cannot be doubted. He loved H. P. Lovecraft. He spent much of his own money establishing, with Donald Wandrei, Arkham House, publishers with the sole intent of preserving the weird fiction and poetry of Lovecraft in handsome hardcover editions. In 1943, Derleth and Wandrei published their second Lovecraft omnibus, Beyond the Wall of Sleep, in which they published “The Commonplace Book,” consisting of entries that Lovecraft recorded of dreams and suggestions for stories. These entries, plus the discovery of notes for a story that Derleth eventually wrote as “The Survivor,” and the two chunks of text that helped to formulate the novel The Lurker at the Threshold, inspired Derleth to begin writing what are called the “posthumous collaborations,” which were published under the dual byline of H. P. Lovecraft and August Derleth. Part of Derleth’s approach in the writing of these things was to try and mimic absolutely the prose style of Lovecraft, which he proclaimed wasn’t easy, adding, “I should know,” as a way of suggesting that he thought he had succeeded, which in fact he had not. Many reviewers of Lurker found that it was far less successful than anything else they had read from the pen of Lovecraft. One gent wrote that it was obvious that the first two-thirds of the novel were the work of Lovecraft and the final third the writing of Derleth. The novel is often published in paperback with just Lovecraft’s name on the cover, when in fact he had nothing to do with this book that was written after his death. These posthumous collaborations have long been abused by Lovecraft scholars who see them, for various reasons, as a criminal act. I decided to read the first collection of these stories, The Survivor and Others, and do a story-by-story commentary on YouTube; and what I found was that these stories, although not in any way as fine or as original as Lovecraft’s own work, weren’t bad at all, and that some few of them (especially “The Survivor”) were genuinely Lovecraftian in tone and substance.

I have become an obsessed writer of Lovecraft horror; it has become my chosen profession. Part of the method of writing this kind of story is going back and reading Lovecraft’s original tales, becoming intimate with his work, and letting those stories and poems sink into one’s being. Doing this has shewn me that the Works of H. P. Lovecraft have depths of originality and power that may constantly be culled for inspiration in writing one’s own fiction. It is fruitless to try and “write like Lovecraft,” and why would anyone want to do something so boring anyway? We pay homage to the Gentleman from Providence by writing stories that evoke his genius without ripping off his ideas, however keenly our tales may conjoined to HPL’s originals. We can, while “being Lovecraftian,” write horror fiction that remains audaciously our own. It’s fucking rad. 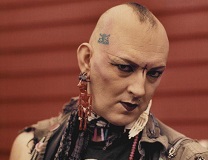 W.H. Pugmire has been writing Lovecraftian weird fiction since the early 1970’s, determined to show that one can write in the Lovecraft tradition and still remain original and audacious. His many books include The Tangled Muse, Some Unknown Gulf of Night, The Fungal Stain and Other Dreams, and Gathered Dust and Others. 2013 will see the publication of two new hardcover collections, Encounters with Enoch Coffin (Dark Regions Press, written in collaboration with Jeffrey Thomas) and Bohemians of Sesqua Valley (Arcane Wisdom Press). Willy also has many tales in numerous forthcoming anthologies.