Short of physically walking through a haunted house, there is no narrative experience more immersive in the horror genre than modern video games.

I grew up playing video games. I received an Atari 2600 when I was three years old; Nintendo captured my imagination the way Disney films captured earlier generations. I’ve seen the technology around video games grow and change along the course of my life. I’ve had the pleasure of working as both a tester and copywriter for the game industry, and I’ve geeked out over my passions with fellow enthusiasts from all over the world. My interest in horror grew alongside my love of gaming, though I always viewed the two as distinct and separate. I could never have imagined the bright colorful worlds of video games and the gaudy darkness of horror fiction interacting, until the day I lead the intrepid members of the Special Tactics and Rescue Service into an abandoned mansion deep in the woods . . .

Good horror hinges on identification; the more you can sympathize with the innocent babysitter, the nervy cop, the obsessed antiquarian, or the other beleaguered protagonists of the genre, the more you can vicariously experience their terror. Unfortunately, there’s a built-in limit to how close you can get to their story. Characters live and die for our voyeuristic thrill. Their victories are their own and their stories end without our intervention. Conversely, when I hide in the closet from the deformed Scissorman, when I dart between the trees frantically trying to collect pages before the Slender Man snatches me away, when I struggle to keep the lights on at my guard station knowing that malevolent animatronic nightmares are creeping through the dark to tear me apart, I’m in the story itself. The characters have their stories, but they can’t earn their happy endings without my direct intervention. Their struggles become my own.

The horror genre often occupies a strange niche in gaming. Most video games are power fantasies. Push a few buttons and you have the same skill level as a Navy SEAL, the starting line of the biggest NFL teams, or Batman. Horror is dependent on vulnerability, and many gamers view vulnerability as the antithesis of gaming. In order to experience the terror that your protagonist feels, you have to share their limitations. Often, this vulnerability is built into resource allocation. You never have enough ammo, healing is hard to come by, the smaller monsters can do tremendous damage, and you’re forced to think carefully about how you defend yourself.

Most early examples of the genre had tricky control layouts, most famously Resident Evil’s notorious tank controls, which only heightened the tension. One of the core philosophies behind game design is the seamless integration of technology with player so that control becomes almost instinctual. But the design of many early horror games took a lot of getting used to. It inadvertently helped to capture the feeling of how a real person would react when confronted by a supernatural threat. Nothing is quite so terrifying as watching a wall of zombies shamble forth from an unexpected corner as you struggle to line up a shot that will do real damage before they get you.

Finally, one of the most compelling aspects of horror games is how they confront the concept of danger and death that lies at the root of the genre. It’s easy to sit back and mock the teenagers on the screen or the disbelieving saps on the printed page; it’s quite another to put yourself in their shoes and be forced to make split-second decisions to stay alive. In horror gaming, you have to earn your happy ending through death after death, each time becoming a little more prepared to face the monster at the heart of the labyrinth. Much like Tom Cruise’s beleaguered military officer in Edge of Tomorrow—a film whose source material was directly inspired by video games—your character winds up trapped in a hellscape of endless repeating nightmare. Your efforts represent their only chance for escape.

As I transitioned from horror enthusiast to horror creator, I found that I kept drawing from my experiences with video games for my stories. There’s something of the immediacy and relentless tension of gaming that works well in horror fiction, and I’ve met a lot of fellow writers around my age who were influenced by video games in the same way, much like EC Comics influenced Stephen King and his generation of writers. Gaming certainly has made its influence shown in popular art. Jhonen Vasquez, creator of the deeply macabre Invader Zim television show, credits his angular, jagged art style to the 8-bit video games he grew up with. Obviously, it’s easier to show video game’s influence in a visual medium, but video games can teach tremendous lessons to horror fiction writers.

First, video games are ultimately about agency. Your avatar’s success or failure is directly in your hands, which can be a tremendously empowering experience if you’re deeply invested in their struggle. While a reader cannot actually influence events in a piece of prose, making a protagonist both identifiable—if not necessarily likable—and having them affect the narrative in compelling ways will help the reader slide into their shoes. This doesn’t mean that every horror protagonist needs to be a two-fisted action hero (horror always works best from positions of vulnerability) but it does mean that the protagonist needs to make the most out of the opportunities that they are given. As Alan Moore wrote in his seminal V for Vendetta graphic novel, sometimes we’re only given an inch to move in, but within that inch we are free.

Second, techniques of horror video games can often be reasonably simulated in fiction by the use of close perspective. The vast majority of games put you in command of a single perspective, and you interact with the game world through their eyes and through their limitations. As you start playing any game, you’re quickly taught what your character can and cannot do, and you gain a sense of the character’s personality through those actions. This was true even back in the primitive 8-bit days of gaming, where Mario’s motions and sound effects gave the impression of a character filled with unbridled enthusiasm. Let your readers get a sense of who your characters are immediately, infuse their personality into their smallest interactions with the world around them, and you will have the foundation for that close perspective. This will be endlessly useful for when the monsters come knocking.

Finally, the most horrifying moments in games often come when a character is out of control. Whether it’s a non-intuitive control scheme stifling action in moments of panic or a monster that is invulnerable to a character’s attacks, there are always moments in horror video games when a character struggles to control themselves as the threats start closing in.

I find there are a lot of horror stories that are simply action/adventure with a ghost mask on. We have all read books where monsters are put in their place with a cocky attitude and an AK-47. While those stories are fine, they often undercut horror’s need for vulnerability. In a recent interview, horror author David Nickle said something that really struck me: “Strength, resolution, courage all negate fear—turns a nightmare into an adventure, or maybe just a tough job. They might all have their place in a good tale of terror—but not until weakness, indecisiveness, and cowardice have done their work.” [For the rest of the interview, see sfsignal.com/archives/2015/08/mind-meld-using-fear-fiction.]

If a writer truly wants to create a work exploring fear, they need to remember what being vulnerable is like. The video game Doom 3 was often startling, in that monsters were constantly jumping out in the dark and screaming in your face, but it is hard to be scared of something your Space Marine protagonist could easily blast away. Conversely, the game Fatal Frame cast you in the role of a terrified teenager in a haunted house with only a ghost-capturing camera to protect you. You heard the character’s panicked breathing, controlled her as she stumbled through the mansion, and every fight was a life-or-death struggle to align your camera against the flitting grotesqueries set against you. I’d never been so terrified of a fictional work in my life, and I’ve strived to simulate that sense of fear in my writing.

Video games are really important to the future of the genre both because the medium has grown exponentially in our lifetimes and because they’re going to be part of the material that fuels the next generation of horror creators.

Video games are often maligned by the older generation who either think of them as disposable entertainment like Pong or assume all games go to the excess of titles like Grand Theft Auto. As a result, many of them miss the fact that video games have developed deep, immersive storytelling techniques over the last few years. Generations of people have grown up with these shared experiences and they will fuel their imaginations the way disturbing radio crime stories, ghastly horror comics, and gruesome heavy metal music have influenced previous generations of horror creators. There are a wealth of ideas and techniques that horror creators can borrow from video games to enrich their own narratives.

But, as the original Resident Evil game warned, these games often contain scenes of explicit violence and gore. 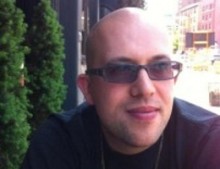 Justin Bailey took his pseudonym from a video game cheat code. He was born in San Francisco and currently lives in Brooklyn like a big hipster cliché. He holds an MFA in writing popular fiction from Seton Hill University and his fiction has been featured in Old Scratch and Owl Hoots: A Collection of Utah Horror. For more of his thoughts on the horror genre, check out CreatureCast.net.