What scares you, Justin? What is it that you’re trying to say?

I was halfway through the first draft of “One Hand in The Coffin” (Strange Horizons) when I discovered what my story was really about. It had just turned midnight on July twenty-third, the anniversary of my cousin’s murder, and one of the main characters had his name. The horror wasn’t the possessed therapy puppet. It was a society that demands multiple jobs from a single mother to make ends meet. It was the lack of access to mental health services in black and brown communities. It was loss and hopelessness. The puppet just gave it all a name.

The black experience of racism, I found, is horrific. Why make up monsters when there are so many to fear in real life?

Of course, this wasn’t always the case for me. As a child, I enjoyed a good horror story as much as anybody. My love for the genre started with R.L. Stine’s Goosebumps series. I devoured these fun little stories about evil dummies, cursed cameras, and monster’s blood. As an anxious kid who worried about death and dogs and the dark, I looked forward to being “safe-scared.” It felt good to exhaust my fears on something I knew couldn’t actually harm me. Did I notice that none of Stine’s main characters were black like me? No. At least, not consciously.

As I grew, so did my tastes. Gremlins, Arachnophobia, Child’s Play. Stephen King, Clive Barker, Peter Straub. Surviving a horror novel was like conquering the big-kid rides at the amusement park. An uncomfortable self-awareness crept in, however, while watching Scream 2. I instantly aligned with the opening scene’s young black couple. When they were killed off in the first five minutes, it left me with a feeling of “oh . . . this wasn’t made for me.” Suddenly, I wasn’t “conquering” the ride after all. I was the kid crying inconsolably from just outside the gate, my distress meant to add to the triumph felt by those who stepped past me and onto the loading platform. Perhaps before I had protected myself from this by inserting my brown skin into the written narratives. Now, in full color on the big screen, it was undeniable: I was either a prop for white entertainment or watching from the sideline.

This epiphany tainted the genre. Where were the people who looked like me, after all? I wouldn’t like the answer. All too often, horror has been a tool to reinforce the principles of white supremacy. Monsters in fiction and film—from King Kong to Xenomorphs to Freddy Krueger—represented the unknown and the misunderstood, stripped of history or context, there only to frighten and justify any measures required to defeat them. They allowed the irrational but ubiquitous fear of black people to fester unchecked in society’s imaginations without triggering white guilt. Once the monster was suppressed, society could return to a “normal,” safe existence.

These portrayals have lasting psychological impacts. I saw it when I ended our family outing early after my five-year-old son’s white playmates chose him to be the monster in a game of playground tag. I felt it when my Uber driver loudly refused me service at a New York airport and for a second I thought that maybe—just maybe—I really was the villain. I see it continuously in the news every time someone “feared for their life” when faced with a black person just trying to live.

Lacking this crucial understanding of race in horror at the beginning of my career left me stranded in the genre. Although I had grown up in a black home, went to black schools, and lived in black neighborhoods, my first attempt at a horror novel centered on a white family. I crafted what I thought was a standard haunted house, replete with gruesome ghosts and capped off with the mandatory twist ending. Only it wasn’t scary. As I reflected, I wondered how I had gone some hundred thousand words and multiple drafts without incorporating my blackness. No black main characters. No inner city setting. No community pride mixed in with societal fears. A recurring song throughout the novel was from a genre I didn’t even like. Fiction writing can be a window into one’s psyche, revelatory in what’s put on and left off the page. What exactly, then, was I trying to escape?

I came to horror as a naive tourist in a xenophobic world that centered whiteness. Now, as an active participant to the genre, I challenge myself with two questions: One, what scares me, and two, what do I have to say about it? When I was first starting out, I thought it was ghosts and the undead. But they were only as frightening as the human experience that inspired them. Stephen King once commented that the idea for Pet Sematary came from just barely stopping his young son from chasing a loose ball into highway traffic. What if he hadn’t been able to grab that shirt? What if he’d been a second too late? The horror isn’t having people come back from the dead. The horror is in losing a child and not being able to deal with that.

The black experience is frightening, cutting, and can evoke a level of discomfort only the truth can assuage. Who needs monsters? Well, we do, to make our experience more digestible. Horror—and speculative fiction in general—allows art to relieve us from the hard truths of our reality by juxtaposing with both the supernatural and the macabre. They warn us in “safe-scared” spaces what humanity is capable of. What racism is capable of doing to black and brown bodies, legacy, and mental wellness. My upcoming novella Spider King (Serial Box) is my blackness’s answer to The Fly. It takes the historically demonized “other” and makes society the monster. I attempted something similar in The Perfection of Theresa Watkins (Tor.com). I took two things usually seen as menacing in America—black people and those struggling with mental illness—and made their experience of society the horror. By the end of my stories, the so-called “monsters” are the least to fear.

It’s all also a bait and switch, to be sure. Maybe I want you to learn something about my experience, because a world with a little more understanding is a little less horrifying for those who are historically and chronically misunderstood. How popular would Lovecraft Country be if it were just about racism in the Jim Crow South? How about if Watchmen was just about the Tulsa Race Massacre? Horror, in a sense, may be my way to lure you onto a faulty plane and give you something familiar as you buckle your seatbelt and settle in for the ride. And during the flight I’ll attempt to give you a little bit of me through some tough-love turbulence. Hopefully we’ll land safely on the other side, together. 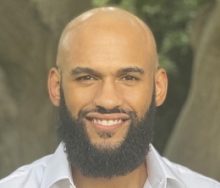 Justin C. Key is a speculative fiction writer, psychiatrist, and a graduate of Clarion West 2015. His short stories have appeared and are forthcoming in The Magazine of Fantasy & Science Fiction, Strange Horizons, Tor.com, Escape Pod, and Interstellar Flight Magazine. He is currently working on a near-future novel inspired by his medical training. His novella, Spider King, is set to be released by Serial Box in early 2021. When Justin isn’t writing, working in the hospital, or exploring Los Angeles with his wife, he’s chasing after his two young (and energetic!) sons and marveling over his newborn daughter.