Every house is haunted. The question is, by what?

Walk into a new house; some are happy, some are not. Like a fine wine, old houses are much more complex.

In the summer of 2013, I was sent to Ireland to serve as the resident faculty member for the Stonecoast MFA in Creative Writing program. I was grateful for the chance to travel and eager for the experience, but I have to confess that prior to arrival, Ireland had never been on my bucket list. Wasn’t Wales supposed to be more picturesque? And closer to London to boot?

Yet within the span of an hour, Dublin had possessed me. I was engulfed by an overwhelming feeling of yes, of something in the air and the land that was connected to me. I was supposed to be there. So it was with deep regret that I left Dublin the following day and traveled to Galway.

But the feeling remained, just as strong. Galway, yes: the cobblestones, the sea, the lace curtains, and the air-conditioned bus. Yes.

And then to Dingle, my home base for a week, living and working in a seaside guest house with my ten students, and the staff. And the feeling only grew. There was such a pull, a yearning, that I began to investigate ways to live there once my daughter went off to college and I could move out of San Diego. I was stunned by how much I loved Ireland. I had in some way let Ireland in. And it changed me as a writer, profoundly. It made me truly accept that my time was finite, and that I should write what mattered to me—the book of my heart.

As soon as I knew that, I knew that the book of my heart was a haunted house novel.

I didn’t know why. My students suggested that my decision was influenced by the pervasiveness of Irish ghost stories and legends. But my first book purchase in Ireland had been The Asylum, a “neo-Gothic” novel written by the Australian writer John Harwood. I gave a talk on the uncanny in Irish literature, but I talked about leprechauns, selkies, and pookas along with changelings and ghosts.

Nevertheless, 2013 would become “my year of haunted houses.” I would keep a diary of all the haunted house stories I read and watched, and begin sketching out my own. I purchased a beautiful latched notebook at the Dingle Bookshop on Green Street and set to work. And of course, I did research.

Here are some things I learned about haunted houses:

The earliest report of a haunted house is found in a letter written by Pliny the Younger (61-c.112.) He described a villa in Athens plagued by the ghost of a man in chains; the phantom’s bones were dug up and given a proper burial, and the ghost never troubled the living again. Haunted house tales also appeared in One Thousand and One Nights (first translated into English in 1706).

The seventeenth-century Pre-Raphaelite “Graveyard Poets” laid the foundation for the Gothic and Romantic periods, leading us from Dickens’ Great Expectations (for, as blogger Julie Bluntin explains, Dickens shows us how a house becomes haunted via Miss Havisham) to Shirley Jackson’s The Haunting of Hill House, Stephen King’s The Shining, Susan Hill’s The Lady in Black, and The Little Stranger by Sarah Waters. There are hundreds of haunted house novels. And stories. And movies.

Some of us court ghosts. We want to live where they dwell. Forensic psychologist and ghost investigator Katherine Ramsland slept in the murder room at Lizzie Borden’s Fall River house in Massachusetts; the members of the Haunted Mansion Retreat in North California have recorded their experience in a series of books. Michele Hanks investigates the phenomenon of “ghost tourism” in the UK in her book, Haunted Heritage: The Cultural Politics of Ghost Tourism, Populism, and the Past. There are ghostcams streaming from “haunted” locations all over the world.

“Scare specialist” Dr. Margee Kerr, the staff sociologist at ScareHouse in Pittsburgh, says some people love haunted places because they enjoy the rush of dopamine that accompanies the fear response. It’s a well-curated response: There are between 3,500—5,000 commercial haunted houses on any given Halloween, as well as Christian-based “Hell houses” designed to put the dread of damnation into parishioners who might be tempted to stray.

For me, it’s strange that the book of my heart is a haunted house novel, far stranger, actually, than the sensation that I’m “supposed” to be in Ireland. For all of my being a horror writer, I avoid most horror movies. They’re too frightening. I have to select them carefully or I can’t make it all the way through (I’ve given up numerous times on Paranormal Activity and two nights ago I quit watching The Babadook). When I’m home by myself, I quake, mentally obsessing on scenes from The Lady in Black, Ju-On, and The Haunting of Hill House. I would rather walk through glass than voluntarily enter a Halloween haunted hotel, hospital, or go on a haunted hayride. I do not court the fear response.

But I do like overcoming my fears. When I was very young, I was pathologically afraid of the dark. I had terrible insomnia (and a night light). And then one night, as I walked down the hall of my house, visualizing something creeping close behind me, I whirled around and shouted, “I’m the queen of it!” I wonder if then and there, a horror writer was born—someone who wanted to stare down the monsters so she could banish them. Is that what I’m looking for in the pages of my haunted house novel?

I sense there’s something more to it. Something like my love of Ireland, which I can’t explain.

But a book has been written, and I’m working on another.

And the twin obsessions remain. 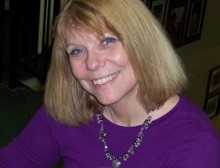 Nancy Holder is a New York Times bestselling author (the Wicked Saga, co-written with Debbie Viguie). She has written over eighty novels ranging from books for early readers to adult horror and science fiction. Her work has appeared on the recommendation lists of the New York Public Library, the American Library Association, and the American Reading Association. She has received five Bram Stoker awards, a Scribe Award, and a Young Adult Pioneer Award. She is known for writing material based on properties such as Guillermo del Toro’s Crimson Peak, Buffy the Vampire Slayer, Teen Wolf, Beauty and the Beast, Saving Grace, Hellboy, Hulk, The X-Files, and others. She has written over one hundred short stories, many appearing in Best of anthologies, and she teaches in the Stonecoast MFA in Creative Writing Program offered through the University of Southern Maine. She lives in San Diego. Learn more @nancyholder and at nancyholder.com.