The H Word: Dropping the Vial

A few years ago, a friend of mine with no idea what she was unleashing on the world handed me a copy of the book she’d just finished reading. “Here,” she said. “I know you’ve been talking about writing something with zombies. I think you’d like this.” The book was The Return of the Black Death: The World’s Greatest Serial Killer, by Susan Scott and Christopher Duncan, two proponents of the hemorrhagic fever theory of the pathogen (which is a topic for an entirely separate column). I devoured it. I spent a month researching the Black Death, the bubonic plague, and everything we knew about the various hemorrhagic fevers, some of which are incredibly effective and underrated killers. I wrote a seven-minute Schoolhouse Rock-style song about the book, explaining its research in cheery rhyming form. An example:

Well, we blamed it on the rats and we blamed it on the fleas.
We were ignoring crucial facts about the spread of the disease,
And I think it’s time we called for a more thorough inquisition,
Since it’s clear that the Black Death possessed a droplet-based transmission.

But a mysterious thing began to happen. People began coming up to me after concerts where we’d performed the song, and thanking me for clearly explaining concepts like “droplet-based transmission” and “latency.” They had lived their entire lives in a world filled with viruses, catching and passing them around like microscopic, predatory Pokémon, but no one had ever taken the time to explain. Viruses were the terrifying unknown, invisible, inescapable, and potentially deadly. What I had done, in a jaunty, Seuss-ian manner, was to make them a little less alien. No less terrifying, however. Because that’s the nice thing about viruses:

No matter how much you know, no matter how careful you are, they can still kill you — and that’s if they’re feeling friendly. They can cause permanent brain damage (viral meningitis), blindness (measles), paralysis (polio), and scarring of the lungs and throat (whooping cough). They can weaken your organs, leading to future complications that, hey, could kill you. And all this assumes you caught and survived the disease after you were outside your mother: some of what we consider the “common childhood ailments” (our friends covered by the MMR vaccine) can lead to serious birth defects and complications that will last for the affected child’s entire lifetime.

Now, it’s important to note that when someone says “I think I’m sick,” they’re not necessarily talking about catching a virus. Bacteria and parasites can cause illnesses. Malaria is caused by a small, blood-borne parasite, and kills thousands of people annually. Many cases of pneumonia are bacterial, as is strep throat — and let’s not forget MRSA, that flesh-eating surprise of a skin infection. Fungal infections are less common, but can also mimic the effects of some viruses and bacteria. Really, the natural world has a remarkable assortment of microscopic killers, and many of them are happy to visit the human body.

(This isn’t even touching on prions, which are in some ways the most terrifying of all, with their decades-long latency periods and their relatively undetectable nature. Remember the Mad Cow scare? That was prions. We still don’t know how many people may be infected, because we have no way of checking. This is why spending too much time in my company can make it difficult to sleep at night.)

Even if we limit ourselves to viruses, there is little that they cannot do. The viruses responsible for measles, for example, can hang suspended in the air for hours after an infected person has come by, and has a ninety-percent infection rate among a non-resistant population. Smallpox, that great killer of men, was even worse. Much of the history of global colonialism is a matter of who was resistant to the most effective and deadly viruses. When the European settlers arrived in North America, they effectively conquered the continent on the back of the viruses they carried in their blood.

It can be difficult for people who have never endured a violent pandemic to imagine what it was like to live in a time before vaccines. Prior to the extinction of smallpox in the wild, two out of every seven people who contracted the disease could be expected to die. Not good. Prior to vaccination, the R0 of smallpox was between five and seven, meaning that each infected person would infect five to seven more . . . at least one of whom would probably die. Smallpox alone shaped the course of dynasties and nations, and was stopped only by a universal vaccination effort that spanned the globe and resulted in the extinction of the wild form of the disease. The last naturally occurring case of smallpox was in 1977. The virus lives on in freezers and in vials (and some of those vials aren’t as secure as we’d all like), but you won’t catch it at Disneyland.

I used a term up there: the R0. What does that mean? Well, the R0 is the basic reproduction number — essentially, the number of people who will be infected by one non-quarantined individual before they cease to be infectious. Because that’s the beauty of the virus. More than anything else, more than bacteria or parasites or fungal infections, the virus knows how to spread. Drop a person with smallpox into a crowd, and you have created five to seven more people with smallpox, all without physical contact. Your initial case doesn’t even need to sneeze (although sneezing is a great tool for viral distribution — a good sneeze can spread germs a lot farther than most people think). Just breathing is enough.

Let’s look at the recent measles outbreak at Disneyland. Two of my favorite things, together at last: infectious disease and a large theme park. Now, because the Cast Members at the gate are pretty well trained to watch for trouble, and because most people are not total assholes, we can assume that the person or persons who brought their infectious disease to the Park were not yet aware that they had been infected. They got measles elsewhere, in other words. They had been infected long enough to have begun generating their own shareable doses of the virus, but had not yet begun to show clear symptoms. This is one of the great and terrible things about unfamiliar diseases, whether they be the supposedly eradicated or the completely novel: almost everything initially presents in the human body as something we would call “a mild cold.” Stuffiness, fever, aching joints, headache, all are common enough to be diagnostically useless. Who cancels a trip to Disneyland because someone on the plane had a cold? Nobody! You suck it up and you go have all that fun that you’ve already paid for!

Let’s assume, for the moment, an infected family. None of them are showing outward symptoms of the disease; they might be a little feverish, but who cares? We’re at Disneyland. For the sake of averages, give them three bodies: two adults and one child too young to go to the bathroom without being accompanied by a parent. Measles actually has a higher basic reproduction number (R0) than smallpox — twelve to eighteen, instead of five to seven. Under normal circumstances, that would be the number of people each of our theoretical family members could potentially infect before they got too sick to share. But this is Disneyland. This is what any airborne virus will consider a “target rich environment.”

It’s hard to say how many people visit Disneyland daily. Conservative estimates put the figure between 30,000 and 50,000 people per day, with the low end being mid-week during the off-season and the high end being a weekend during the holidays. There’s an error margin of about 10,000 in either direction — there could be a nicely deserted 20,000 person day, or a terrifyingly packed 60,000 day. Either way, that’s a lot of targets for measles, which you’ll remember can hang in the air for hours. Say our family rode, oh, Pirates of the Caribbean. They will have been breathing the whole time, riding along a fixed track with little airflow. Every exhale will have put more virus into the air, ready to make friends with whoever comes along next.

Honestly, if there’s anything good we can take from the Disneyland outbreak, which is well over a hundred as I’m writing this — and hence well over the normal R0, unless our “patient zero” was an entire tour group — it’s that it happened at Disneyland, in January, and not at Disney World on Christmas Eve. That would have been a much bigger outbreak. That might already be an epidemic.

This is not me going on one of my pro-vaccination rants, save to say that roughly five percent of people who have been successfully vaccinated will still be infected following exposure. So if we assume that of the 30,000 people who were conservatively at Disneyland during the exposure period, 20,000 of them had been successfully vaccinated, we’re still looking at 1,000 potential cases just from the vaccinated population. We’re looking at substantially more from the 10,000 who had not been vaccinated (a ninety-percent infection rate). A killer walked among them that day. A killer with the potential, given the numbers involved, to cause up to 10,000 cases (five-percent of 20,000 + ninety-percent of 10,000), all without letting anyone know that it was there until it was too late.

For me at least, the true horror of disease is not the late stages — not the bleeding and the internalized necrosis and the uncontrollable rage, although those things can be terrifying. For me, the true horror of disease comes from the silent way it moves through the world, taking what it wants, touching everyone in its path. Disease is not a 1980s slasher, coming for those who fail to subscribe to some cinematic subset of Puritan values. Disease is not a killer shark, waiting for foolish swimmers to dive into the sea. Disease is a part of the natural world, and while we have done a great deal to reduce its daily impact on our lives, the fact remains that not only have we not defeated it, we have allowed it to reclaim some of the ground that it has lost.

Viruses are the best, stealthiest killers, but all our causative agents deserve their time in the sun. With a little research and a few conversations with your local medical professionals, they could be your new best friends. Anyone who says there’s nothing scary about a sneeze hasn’t been reading the right books.

Ring around the roses, pocket full of posies; ashes, ashes.
We all fall down. 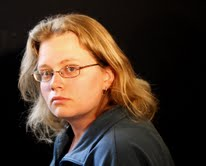