That I write horror fiction is not something my wife has ever questioned. Nor has either of my sons asked me to explain the field in which I work. It was my mother who asked me about my fiction, though she did so only recently. We were at a dinner party with another horror writer, and as the plates for the main course were being cleared, my mom turned to him and asked where he derived his inspiration from. As he started to reply, I noticed her eyes dart to me, and widen slightly with alarm as she realized that she had put to him a question she’d never asked me. (She’s a good mom, conscientious about that kind of thing.) So once my friend was done giving his answer, she turned to me and repeated her question. I mumbled a response which I can’t really remember, but which I was aware was neither interesting nor all that accurate. My mom didn’t hold it against me, and soon we were eating the dessert she’d provided.

Of course, who says you need one? As a friend of mine with whom I’ve discussed the matter says, “What does it matter why you write it? If people like to read it, shouldn’t that be what matters?” Perhaps it should. I can’t help seeing the question, though, as the other half of one that seems to be floated online on a fairly regular basis, namely, a concern for the nature (and purpose) or horror fiction. (Recently, Richard Gavin undertook to address this question on the blog The Teeming Brain [tinyurl.com/gavin-horror].) If we’re interested in what horror fiction does, then it makes a certain amount of sense that we would be interested in where it comes from.

In thinking about this question, I went to my bookshelf, and found that, as usual, Stephen King had been there first. In the foreword to his 1978 collection, Night Shift, he writes about the question that he, as a writer of horror fiction, is asked most frequently: “Why do you choose to write about such gruesome subjects?” He answers this question with one of his own: “Why do you assume that I have a choice?” As he sees it, writing is a kind of obsessive behavior, and obsessions are, by their very nature, beyond our control. King writes about gruesome subjects because they are what he writes about—or, it might be more accurate to say, what he can write about—or, even, what he must write about if he is going to write.

There is something to King’s response. The fictions a writer produces are not necessarily those he or she most likes to read. (I think of Philip Pullman, who, despite his considerable success writing fantasy, confessed himself a frustrated realist.) One of the tasks to which aspiring writers set themselves is discovering what kinds of fiction they can write. While there’s no obligation to become a fantasist if you truly don’t want to write fantasy, in writing, as in most things, talent in a particular kind of fiction tends to encourage you to work in it. If the stories you produce in this genre find success, then you’re more likely to continue in it. It’s all very simple.

Except that it’s not. The appeal to ability neatly sidesteps the further question that King’s answer raises, namely, that if your writing—your obsession—trends in this dark direction, why does it do so? What happened to you—what experiences set you on this path? To be fair, it’s a question we ask of anyone who pursues a career out of the (imagined) ordinary, whether it’s seeking elected office, or practicing medicine, or embracing a religious calling. I think our curiosity is aroused by career paths that are not solely about earning money, but that seem to involve other goals. (After all, when was the last time that I wondered about my friends who’ve chosen careers in the corporate world? Rightly or wrongly, I assume they’ve made their decisions based on what promises to give them the biggest paycheck.) Certainly, we’re fascinated by artists of all stripes. For the artist in question, however, there’s often more than a little anxiety attached to the question of why. This anxiety may attach more strongly to those who work in forms or modes that are outside the main currents of their art (a group in which I would include the writers of horror fiction). As Ramsey Campbell put the matter, it’s a short step from, “Ah, so that’s what you’re writing about,” to, “Ah, so that’s all you’re writing about.”

Horror writers are not unique in this regard. As his life unwound, F. Scott Fitzgerald refused any therapeutic interventions, fearing that tracing the wellsprings of his creativity would poison them. Rainer Maria Rilke was fascinated by the possibilities suggested by Freud’s view of the psyche, but similarly leery of their effects on his creativity. Of course, Fitzgerald’s later career did not bear out the promise of its earlier stage; while Rilke’s acquaintance with psychoanalysis led to some of the most important moments in his Duino Elegies. Closer to home, as it were, Peter Straub’s engagement with psychological analysis bore fruit in the Blue Rose novels and stories. I find Rilke and Straub’s examples of interest because they demonstrate that, far from hindering a writer’s work, an investigation of the creative impulses fueling it may open the door to new work.

If there is a danger to such an endeavor, it lies in its potential to oversimplify matters. Freud coined the term overdetermination to describe the excess of motivations that attach to our actions. Any one of these causes might offer sufficient explanation—it’s all we would ask from a work of fiction—yet our psyches are profligate, serving up reason after reason. The temptation to such reductionism is one that bedevils anyone studying the biography of a writer, especially when a compelling incident presents itself. Lovecraft’s father went insane from tertiary syphilis and had to be institutionalized when Lovecraft was three? There you go. Stephen King’s father abandoned his family when King was two? Bingo. Peter Straub was struck and almost killed by a car when he was seven? Case closed. Yet there is more to the lives of each of these men than these details, important though they undoubtedly were to their development. And if we can recognize that there is more to the lives of others, how much more must there be to our own experiences?

I’m trying to walk a fine line, here, arguing for investigating the sources of our creativity while urging us not to place too much emphasis on any single cause. Those specific incidents do have their uses. They can serve as lenses, bringing aspects of a writer’s work into focus. The figure of the mad, absent father-figure recurs in various guises in Lovecraft’s work, from “The Rats in the Walls” to “The Call of Cthulhu” to “The Shadow Out of Time.” There are abandoned children literal and metaphorical in Stephen King’s work ranging from Carrie through It to Hearts in Atlantis. Trauma and accident stalk Peter Straub’s characters, from Julia to Koko to A Dark Matter. It’s when those lenses lock into place, preventing us from seeing any more in the writer’s work, that they become a hindrance.

I have to confess, I’ve come to the end of this brief essay without a clear sense of what answer I might give the next time someone asks me what it was about my life that inclined me to write horror. I think about my father’s early and unexpected death when I was twenty-three; I think about the pair of heart attacks that almost killed him when I was thirteen. I think about the surgery I had on my right eye when I was two-and-a-half, the result of a speck of metal that became lodged in my cornea and had to be drilled out. I remember standing in the ICU room beside my father’s quiet body; I remember sitting up with a family friend, waiting for news from the hospital. I remember (barely) standing in a crib in the dark, crying, my right eye patched, my arms restrained in splints to keep me from tearing the patch off. Any of these memories feels as if it might be the force that drives the black ink across the page. Each of them feels as if it might show me something new about the stories, the novel, I’ve written. Together, they’re a start. 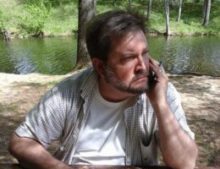