Not that long ago, fans and detractors alike were wringing their hands about whether or not Guillermo del Toro’s love letter to the Gothic romance genre Crimson Peak should be considered a horror movie. The main concern seemed to be that it wasn’t particularly scary, and, perhaps more damning, didn’t really try to be. Which comes back to the idea that, whatever else it might be, horror should be trying to scare you, and can be judged on how well it succeeds.

Even if we do accept “it aims to scare you” as the definition of horror, there are lots of different kinds of fear, and different ways to be scared. When someone asks if something is scary, they’re most often talking about the much-maligned “jump scares” that populate the majority of Hollywood’s horror output, and which, even at their best, mostly amount to someone jumping out and yelling “Boo!” But while that may be the most obvious kind of scary, it’s certainly not the only one. There are much more cerebral fears to be found in the literature and cinema of horror, from the cosmic nihilism of Lovecraft, Ligotti, and Barron to the “pleasing terror” of M.R. James and E.F. Benson. Movies like John Carpenter’s The Thing combine the visceral terror of body horror with paranoia and existential dread. Even Crimson Peak, which isn’t particularly scary by most measures, carries a heavy freight of inevitability and decay.

The precise difficulty that accompanies any attempt to pin horror down, to fence it in, is also exactly why horror works so well, and part of why we love it. Horror thrives at the edges of every other genre, in the places on the map marked “here be dragons.” It’s why Gremlins is not only in the same genre as Texas Chainsaw Massacre, but even contains a nod to it. Horror means different things to different people, and each one brings to it their own interests and obsessions, their own foibles and fascinations. For some, it’s simply a matter of what aims to scare you, and how well it succeeds, while for others, it’s more a set of touchstones and traditions, something that we can use as shorthand to help fire our imaginations, and fear doesn’t even really enter into the equation.

Limiting horror to only what scares us seems like it would rob the field not only of many of its best entries, leaving them orphaned in the storm without a genre to call their own, but would also rob horror itself of many of its resources. Horror is capable of so much—beauty, numinosity, dread, even humor and hope—scaring you is just one trick up its sleeve.

When I first started publishing stories, I struggled with the label of “horror writer,” and one of the biggest reasons was because I never write with the express intent of scaring anybody. At most, I aim for a pleasant frisson, James’ “pleasing terror,” those cold little caterpillar feet up your spine. More often, I’m interested in the tropes and the atmosphere of horror, the phenomena of the supernatural or the uncanny, and being scary isn’t really on my mind at all. So I flinched away from calling myself a horror writer, even while horror is the genre that I love the most, and most readily consume.

Just as when I write, though, I’m seldom looking for fear when I crack open a book or sit down in the dark to take in a movie. I’m happy enough when I get it, but it’s not my raison d’être. I love all kinds of horror, but some of my favorites are vintage horror films. The creaky stuff from the ’30s and ’40s, the Universal monsters, Hammer’s Gothic horrors, the works of William Castle, the atomic panic films of the ’50s, Roger Corman and Vincent Price very loosely adapting Poe in vivid Technicolor. Are those films great? Absolutely. Are they scary? Well, definitely not to us now, not anymore. Do they need to be? Hell no.

When I write and consume horror, I am more likely to be looking for something “to kick open doors to light and shadow and let us view something that otherwise we might not see,” as Joe R. Lansdale once put it more eloquently than I ever could. It’s why I write about monsters and ghosts and things that probably don’t exist.

The things that really scare me aren’t that interesting. They’re banal, boring, and quotidian. Like most people, I’m afraid of failure, of financial hardship, of getting sick, of letting my loved ones down. The really scary things in life don’t put your heart in your throat and get your blood pumping; they just weigh you down, day after day, like being pressed under stones, one stone at a time, any one of which would be nothing at all, all of which added together crushes the air from your lungs and makes every breath an agony. Those are the things that scare me, but I sure as hell don’t want to write about them. I’d rather write about monsters. 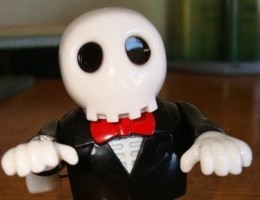