The H Word: And Then the Zombie Killed the Vampire

Horror fans may have hammered the final stake! The general consensus is: zombies are in, vampires out. Whether or not that is true, zombies have definitely surged to the fore while vampires have seemingly faded into the mist. Which begs the question—Why?

Once upon a time, it was clear who was who and what was what. In H.P. Lovecraft’s Herbert West: Reanimator (1921-1922), zombies were created from mysterious serums concocted by mad scientists who reanimated whatever corpses they could get their hands on. (Apparently the author meant his story as a parody of Mary Shelley’s Frankenstein.)

But since publication by the late Richard Matheson of his seminal novel I Am Legend (1954), a controversy has raged: are they vampires or are they zombies? The various film versions of that novel have only added to the confusion: The Last Man on Earth (1964); The Omega Man (1971); I Am Legend (2007).

In film, early zombies were created as a punishment or for control, drugged to the imitation of death by a Voodoo priest, then buried and resurrected with no brain to speak of, said poison ultimately identified as derived from the deadly liver of the puffer fish (fugu). White Zombie (1932) is a classic example.

But even when Romero got his hands on the brainless in Night of the Living Dead (1968), the first in his socio-political something-infectious-from-outer-space masterpieces, it was still pretty clear that these shuffling hordes were zombies. They wore dirty clothes, stared blankly, wandered aimlessly, had mortal wounds and missing body parts, and would let nothing stand in the path of a fleshy meal. (Over the years many came to favor one particular organ of the living: the brain.) They did not talk (in film, but they sometimes could in literature) and couldn’t think—until Romero taught them how in Land of the Dead (2005). They were driven, slow-moving, and tended to attack in haphazard groups.

Such creatures are evident in the majority of modern zombie fiction and film, although they have now gone from shambling to marathon speed. Two popular cinematic examples of the latter derived from fiction are 28 Days Later and World War Z. But the snail-paced are still prevalent; check out TVs ongoing The Walking Dead, based on the comic by Robert Kirkman. Fast or slow, silent and dumb or loquacious and learning rudimentary organizational skills, there is no way zombies can be confused with vampires. Or, can they?

Vampires are the ancestors of zombies. They have an illustrious history in mythology from almost every culture and appear in a variety of forms, dating back to a reference in The Epic of Gilgamesh (2500 B.C.) when they were known as death-bringers. Most are blood drinkers, some soul stealers, others energy drainers. They can be invisible, ghost-like or corporeal, attractive or hideous, dressed in a death shroud or goth capes and diaphanous gowns, or even sexy leather outfits appealing to fetishists. Some walk, others waft, and a few hop to the imagined beat of their own non-pulsing hearts. There are plenty of ways to dispatch them. They can talk, are frequently educated and sophisticated, and fit rather nicely into civilized society, at least since the early English lit aristocratic undead: Lord Ruthven, Sir Varney, Count Dracula, and Countess Karnstein (Carmilla). And despite all the wailing from hard-core horror fanatics about Stephanie Meyer’s Twilight books and films ruining a beloved archetype, it’s only fair to point out that vampires in fiction and film have always exuded a certain romantic and/or erotic charisma.

Back in the days of mythology it was different. Vampires were corpse-like, smelly, dirty, and family blood lured the formerly living from the grave, their wives (or husbands) being especially desirable. Preying upon a beloved is a favorite theme in Japanese vamp myths, and in the Balkans.

Historical “real vampires” were more vicious and less discriminating, especially the better known demons. Vlad Tepes, who may or may not have drunk the blood of the thousands he reputedly staked in his garden, just for the hell of it; Countess Elizabeth Bathory, who bathed in and sipped on the vitae of 604 servant girls to retain her beauty (and preferred blueblood, but I digress!); Fritz Haarmann, the Vampire of Hannover, a blood-swilling pedophile who, along with his gay lover, killed twenty-seven boys, ground up their flesh and sold it to the locals as horse meat; Peter Kurten, the Vampire of Düsseldorf, a heterosexual serial rapist-killer for whom the blood of his female victims was an integral part of his sexual arousal.

Comparing the two supernaturals gives a few clues. Vampires come back from the dead, but so do zombies. Because vampires often have the power to mesmerize or seduce victims, even the most repulsive of them can obtain admittance to homes. Zombies are usually disgustingly undead—ugly, stinky, rotting, and they don’t require invitations, just enough of them to break down a door. Individual vampires can possess “the strength of twenty men,” Van Helsing tells us in Dracula. Individual zombies, on the other hand, have only the strength of the starving and obsessed.

Traditionally, vampires in novels, short fiction, comics, and scripts tend to be loners—Martin (1977), Fright Night (1985 and 2011), the various Dracula-ish movies and books and spin-offs; but may travel in couples or with a familiar—Daughters of Darkness (1971), Let the Right One In (2008 Swedish book & film, 2010 US remake); in gangs or packs—The Lost Boys and Near Dark (1987), 30 Days of Night (2002 comic & 2007 film); or be part of a large vampire-controlled world—in comics and films Blade (1998 and sequels), Daybreakers (2009), Underworld (2003 and sequels). On the other hand, zombies tend to cluster unconsciously. They head toward food by instinct, accidentally gathering into mindless mobs. (See almost all zombie novels and films).

Most literature and film is popular because in some way our world as it is now is reflected. Today’s laser-speed mass media and social networking make us constantly aware of feeling the threat of man-made or natural mass extinction, random acts of terrorism, and the daily grinding-down to anonymity exacerbated by obsession with a cyber world that has replaced physical contact with others and leaves so many feeling lonely. It’s easy to see how fear builds: strangers can no longer be trusted; any second a catastrophe can occur; society will break down and we will be alone and overrun.

Vampires might reflect that, but too often they can be reasoned with, tricked, or even bribed. They don’t represent the mindless and unstoppable masses. They are not terrorists, and rarely exemplify an impending viral pandemic. They do not convince us of a breakdown in law and order or a diluting of the rules of behavior and fair play. What better way to show the fear of being overwhelmed than by a swelling crowd of thoughtless, famished zombies that can’t be reasoned with or stopped—a terrifying image to behold.

Articulate beings in formal evening clothes no longer pose a threat, so we have sent them off to date mortals and integrate. It was the vampires of folklore, the dirty, driven undead things that came back from the grave to get us, they—so much like zombies—were the ones we dreaded. But now, zombies do it better. They approach by the dozen, by the hundreds, by the thousands and actualize all our fears rolled into one unstoppable package—death by number. Death that can’t be reasoned with, only resisted, to the extent we the living are capable of resisting.

We have not turned against the vampire because he/she is now capable of love, we’ve forsaken the nosferatu because they are too much like us. They’ve evolved from the frenzied creatures of folklore to the sophisticated and clever characters of fiction and film and, even in packs, they are organized, smart strategists, planning their attacks. Zombies don’t plan. They are not smart. They simply swarm and we are the ones they swarm over. Like plagues of locusts, hives of killer bees, colonies of fire ants, natural instinct drives them. It’s food they want and food they will get. And that food is us! There’s a difference between the kiss of the vampire and the gnawing off of limbs by hordes of zombies that don’t even have the power to hypnotize us, let alone care to. In both cases, the prey becomes the predator. But which would be a more terrifying transformation: to a cognisant being potentially capable of some control over an addiction, or to a decomposing corpse that will never even contemplate restraint? Who wouldn’t be more horrified by zombies, the annihilators of the vampire? 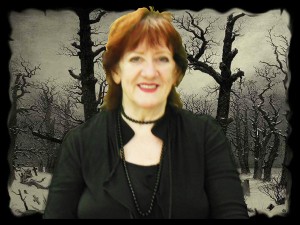 Award-winning author Nancy Kilpatrick has published eighteen novels, over two hundred short stories, six collections, one non-fiction book, and has edited thirteen anthologies.  Her most recent and award-winning titles are the anthology Danse Macabre: Close Encounters with the Reaper, and her collection of short fiction Vampyric Variations. Current work appears in Searchers After Horror; The Darke Phantastique; Zombie Apoclaypse: Endgame!; and the upcoming Blood Sisters: Vampire Stories by Women; The Madness of Cthulhu 2; Stone Skin Bestiary. Look for her next anthologies Expiration Date (May 2015), and nEvermore! Tales of Murder, Mystery and the Macabre (fall, 2015).  Updates can be found on her website nancykilpatrick.com and on Facebook, where she invites you to join her.