The H Word: A Man Walks Into

Those four words alone establish a tone and a structure. They are completely open ended but so familiar that even a deviation from the form would seem played out to you. We know that the next two words will name a place, whether it’s a bar or a saloon or a fishmonger, we know it’s going to be somewhere, and (more importantly) it’s going to be somewhere easily understood by title alone. The second I say “A man walks into Cat & Fiddle,” the joke stops being universal. Naming the last bar I went to, the one that’s only two blocks from my house, the one I am all too familiar with because they serve two for one mac and cheese during happy hour isn’t welcoming, because the structure relies on familiarity and unless I’m talking to someone who lives near me who will walk from their house at three in the afternoon just to eat a double serving of reheated lumpy yellow happiness, then that familiarity isn’t there . . . So, we stick with “a man walks into a bar.”

Of course, the next word must be “and.”

The word has to be “and” because otherwise nothing happens and then there was no point in telling the joke at all. Of course, there’s a version where the next word is “ouch.” There’s that played out deviation from the form I mentioned. I’ll come back to “ouch” later.

I promise, this is about horror, but I spend most of my time writing horror for children, and jokes are the first horror stories we share. My current series Black Sand Beach manages to scare children with creatures made of ridiculous parts that are somehow unsettling when put together. I write about stupid adults being oblivious to the horror around them and kids who see scary situations as nothing but another adventure.

My favorite horror stories are never the ones about big and unfamiliar worlds, they’re the ones about ordinary things twisted just enough to be unsettling. These kinds of stories walk a tightrope because if you tip them too far from the normal world then they become funny, too far back and they become dull. The creatures I mentioned above in Black Sand Beach are simply referred to as “definitely not cows.” Some people think they are more like horses, only with human torsos, turtle hands and a big grinning mouth across the belly. Every part of them alone is almost cute, but together they become a little bit too much to comprehend all at once, which is only made worse by the casual way they stand and stare at you.

Sometimes I change something as small as location. A recent comic of mine is almost entirely set in a bathroom as a party guest tries to understand why the host has corn cob holders in their toothbrush cup. A toothbrush cup is harmless, a corn cob holder is one of the most ordinary things to find in a house, but there’s no good reason, no reason you want to think about, that a person would need to keep one on hand next to their toilet and shower.

These ideas both make me laugh and haunt me. When I come up with something that does both those things, I know it’s going to be a story I can really get into. Really obsess over.

What makes Peek A Boo such a fun game for all ages is that, as the adult, you get to scare the child by taking advantage of their lack of object permanence, then you get to share in the delight and celebration of your own return. Just like “a man walks into” is a universally understood joke structure to adults, “Someone you rely on has just vanished” is a universal nightmare to babies. But that’s why they like it so much when you come back. The fear is worth the reward.

Ten-word horror story for new parents: “I played Peek A Boo and my baby stopped caring.”

Laughter and fear are two sides of the same coin. Jokes and horror stories are almost structurally identical. If you want to make someone laugh or scream, you have to build the anticipation and then offer them cathartic relief. The thing that scares them, the thing that tickles them, must be both unexpected and familiar because they have to be able to be shocked and also be able to identify it in a fraction of a second in order to react. That face coming out from behind the hands? That belongs to a parent who you saw just a few seconds ago. That monster bursting out of your friend’s eye hole? It’s the same one you saw that kid drawing at the bus station in the first act. The familiarity gives you an in, the structure gets you the scare.

I’m not going to pretend that this joke isn’t wonderful. It’s a perfect subversion of something familiar, it’s clever enough to stop you in your tracks but simple enough that no one struggles to understand it. It also works as a joke on two levels, because even if you don’t find it funny that “bar” has more than one meaning, you can enjoy a man getting hurt, which is still second only to farts in the hierarchy of pure comedy. But what if this was the first time you heard an “a man walks into” joke?

So, I write these horror stories for children and use jokes to make sure adults enjoy them too. But that’s the trick, the jokes let the adults get scared. That look you had on your face the first time you told the “ouch” joke to someone, the same look that you had at the beginning of this when you thought “umm, actually there’s another version of this joke that ends in ouch,” that’s when your guard is down and I can scare you.

Adults, especially adult horror fans, are demanding readers and viewers. That’s not a criticism, it’s the result of having lived and seen/heard/read enough stories that you expect to get something more. Every scare has to be bigger and more repulsive, every effect has to be more gruesome, and every twist has to be more surprising. So, the only way I can find to give you a lasting sense of fear is to make you laugh for most of the time.

It’s not a trick, it’s not a trap, your parent’s face will still be there behind the hands once the joke is over. The jokes keep you interested and keep you moving forward, there’s a hope they are leading to something, and the longer that goes on, the more anticipation builds. The scary music swells as the man approaches the bar. His hand on the door handle, clammy and trembling. He takes a deep breath and bites his lip. He scrunches up his face and winces as he finally pushes the door open. It’s just a bar. The same bar you’ve been imagining the whole time. Everyone else had the same one in mind. 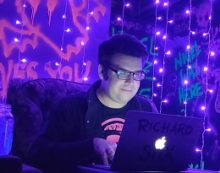 Richard Fairgray is a writer, artist, and colorist, best known for his work in comic books such as Blastosaurus and Ghost Ghost, and picture books such as Gorillas in Our Midst, My Grandpa Is a Dinosaur, and If I Had an Elephant. As a child he firmly believed he would grow up and eat all the candy he wanted and stay up as late as he liked. By drawing pictures when he wasn’t meant to and reading all the things people told him not to, he has made his dream come true. Black Sand Beach is his first graphic novel series with Pixel+Ink. Richard splits his time between Los Angeles and Surrey, British Columbia, where he is able to work furiously, surrounded by plastic skeletons, dogs, friends, loved ones (and possibly the most comprehensive collection of Courtney Love bootlegs on the planet).