The creators of Buffy the Vampire Slayer have some explanations for this. In the show, the police are part of a massive cover-up of the demonic presence in the city, headed by immortal mayor Richard Wilkins III. Also, at some point, the U.S. government creates a secret military unit to hunt and experiment on demons. These explanations could be enough to explain away the lack of attention paid to Sunnydale, but only for a little while. Richard Wilkins III dies in season three, and The Initiative is toppled by the end of season four, and yet Sunnydale remains an obscure city no one cares about right up until the entire city collapses at the end of season seven.

Recently I watched The Chilling Adventures of Sabrina, and similar oddities present themselves in the first season. The town is full of witches that have managed to keep themselves hidden for centuries, except that they’re really bad at it. In witch culture, one can invite other witches to a feast by leaving lamb entrails wrapped around their front doors in clear view of neighbors. By the end of the first season, the death count is already suspicious for a small town, and if the police were corrupt in Sunnydale, they are non-existent in Greendale.

I wouldn’t have questioned any of this as a teenager. I was all wrapped up in the human drama and stakes, the painful deaths of beloved characters. Fictional cities infested with demons didn’t seem inconsistent with my reality at all. I could have imagined people very different from me with lives filled with demon slaying and witches and goddesses from other dimensions. I could imagine a town sitting on top of a Hellmouth in California that no one cared about except its residents–I lived on a small island called St. Thomas, and no one really seemed to care about us. We could have been fighting demons there and who would know? We just weren’t lucky enough to be sitting on a Hellmouth.

Look at those houses! No way are fairytale creatures stealing the voices of that entire city—and collecting the hearts of voiceless victims—without people losing their minds. People would be all up through that city with cameras, ghost hunters, politicians, and military people. No way is an entire high school blowing up without a media spectacle. Everyone saw that giant snake demon. You can’t tell me that’s still a secret. Naw. That is full out war. That is existential horror and questions about the future of humanity. Maybe people could overlook something like that on St. Thomas, with its population of 50,000 mostly black Americans not worthy of voting for the president of the United States, but not in California.

Big secrets are hard to keep. It takes power to keep them. If monsters really lived in the world, they’d also be the people in power: kings and queens, emperors and presidents. But these are just the people in power we see. Scarier still would be the powerful anonymous people with vast amounts of wealth and privilege that we don’t pay attention to, monsters bolstered by and protected through the discriminatory systems that keep power and privilege in limited hands. The mansions of The Chilling Adventures of Sabrina make a certain sense, but the law firm Wolfram & Hart in Angel has an even stronger logic. In Wolfram & Hart, powerful people—in this case lawyers and inter-dimensional demons—are pulling the levers, keeping the monsters hidden, and cleaning up the mess when the horrors spill out. Angel has its own badly kept secrets, but that one detail is important: monstrosity coupled with power.

I can’t imagine an underworld of monsters existing undiscovered for so long in our world without thinking about who the likely victims would be. And that is the other vital piece. In every era it would have to be the marginalized people, the poorest and most disenfranchised, the people society is accustomed to not giving full weight, to not seeing. Who would notice when they go missing? The stories of lords and ladies with dark cellars filled with dead servants rings more true to me than middle class, mostly white cities and towns plagued with the undead. A conspiracy of monsters cannot be classless; it can’t exist without a carefully managed machinery built on marginalization and so many ’isms that we’d need a thousand years to unravel them all, or an act of God to save us before the noose tightened.

If monsters do exist, and we don’t know they’re there yet, I’d place my hopes on an act of God. But if that’s off the table, I suggest we better start untying those knots. If there is one lesson shows like Buffy the Vampire Slayer can impart, it is this: eventually the monsters come for everyone. 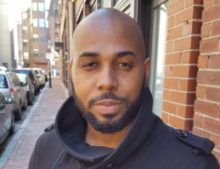 Cadwell Turnbull is a graduate from the North Carolina State University’s Creative Writing MFA in Fiction and English MA in Linguistics . He was the winner of the 2014 NCSU Prize for Short Fiction and attended Clarion West 2016. His debut novel, The Lesson, set in near-future U.S. Virgin Islands after an alien colonization, is forthcoming from Blackstone Publishing. His short fiction has appeared in Lightspeed, Nightmare, and Asimov’s Science Fiction. His Nightmare story “Loneliness is in Your Blood” was selected for The Best American Science Fiction and Fantasy 2018. His Asimov’s novelette “Other Worlds and This One” was also selected by the anthology as a notable story.